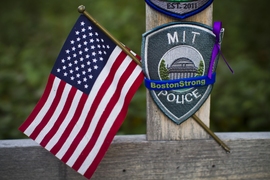 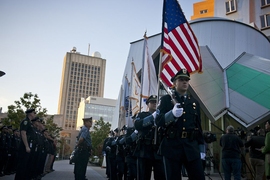 ↓ Download Image
Caption: Members of the MIT Police Honor Guard file past the Stata Center as they approach the memorial to Officer Sean Collier at the start of this morning&#39;s ceremony.
Credits: Photo: Dominick Reuter 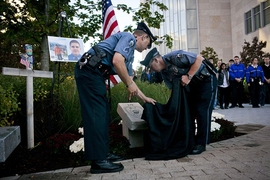 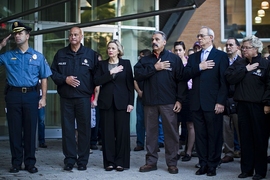 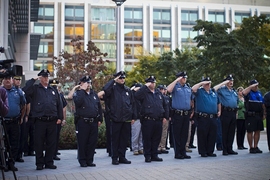 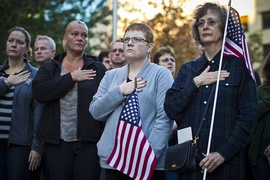 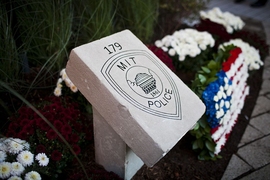 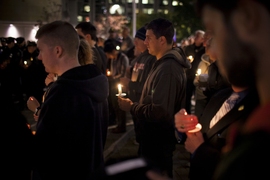 ↓ Download Image
Caption: Approximately 200 people gathered at 10:20 p.m. to mark the moment when Officer Sean Collier was slain in the line of duty six months ago, on April 18.
Credits: Photo: Dominick Reuter 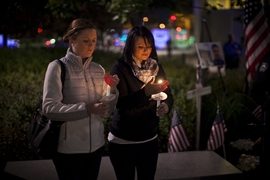 ↓ Download Image
Caption: Officer Sean Collier&#8217;s sisters held the candles from which all others were lit.
Credits: Photo: Dominick Reuter 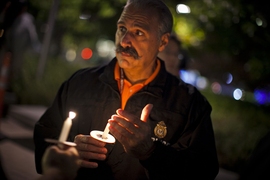 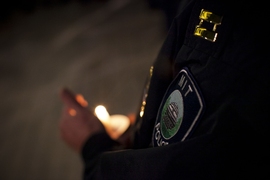 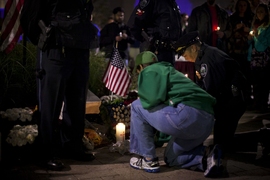 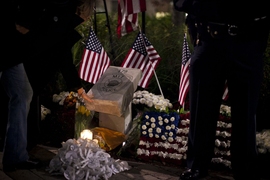 ↓ Download Image
Caption: At the conclusion of the vigil, attendees laid their candles at the base of the memorial stone.
Credits: Photo: Dominick Reuter

Caption:
Members of the MIT Police Honor Guard file past the Stata Center as they approach the memorial to Officer Sean Collier at the start of this morning&#39;s ceremony.
Credits:
Photo: Dominick Reuter

Caption:
Approximately 200 people gathered at 10:20 p.m. to mark the moment when Officer Sean Collier was slain in the line of duty six months ago, on April 18.
Credits:
Photo: Dominick Reuter

Caption:
Officer Sean Collier&#8217;s sisters held the candles from which all others were lit.
Credits:
Photo: Dominick Reuter

Caption:
At the conclusion of the vigil, attendees laid their candles at the base of the memorial stone.
Credits:
Photo: Dominick Reuter

Collier was shot and killed April 18 while on patrol in his cruiser outside the Stata Center. Since that night, the site of his death has evolved into a makeshift memorial featuring flowers, candles, and framed photographs of Collier, placed there by members of the MIT community and others.

On Friday, to mark the six-month anniversary of Collier’s death, MIT Police and the Department of Facilities held a simple ceremony, unveiling a memorial stone at the site. The stone — which sat atop MIT’s Great Dome prior to its recent restoration — bears an engraving of the MIT police badge and “179,” Collier’s badge number.

As nearly 50 MIT officers stood at attention, the 10-minute ceremony began with a procession and salute by the MIT Police Honor Guard. This was followed by tributes from some of the Institute’s neighbors: a prayer led by Matthew Westcott, a chaplain at Harvard University, and a performance of the national anthem by Cambridge Police Lt. Pauline Wells.

John DiFava, MIT’s director of facilities operations and security, offered a few remarks about Collier and that fateful night — still fresh in many officers’ memories.

“It’s painful in the extreme to try to reconcile the fact that six months ago at this very hour, Sean Collier was still with us,” DiFava said.

Whatever Collier was doing that morning — whether “sleeping a few hours extra, maybe at the gym, or already on campus working the day shift” — DiFava recalled that Collier “was living life absolutely to the fullest. He was in a place that only a 27-year-old bachelor can understand. Every day was a good day, it never rains, as long as you had money in your pocket, life was good.”

In addition to the memorial stone — a temporary stand-in for a permanent memorial to be erected in the future — officers laid out an arrangement of flowers in the pattern of the American flag.

‘The job of his dreams’

Sgt. Cheryl Vossmer noted that the ceremony was as much a healing opportunity for the MIT Police as it was a tribute to Collier.

“A lot of us are still having a very hard time of it, so this is the least that we can do,” Vossmer told MIT News. “It’s important for the officers that worked so closely with Sean to see the continued support that this community offers.”

Indeed, a crowd of about 200 students, faculty, and community members came to pay their respects during the ceremony — an event that officers only started to plan earlier this week.

Several brought flowers and flags to place at the site, including Margaret Ann Gray, director of organization and employee development in MIT Human Resources. Gray recalled her only interaction with Collier, on a night when she had to work late: Nervous at the thought of walking through the Stata parking garage alone — “I’d seen too many ‘Law and Orders’ on TV,” she said — Gray called MIT Police for an escort. Soon, Collier pulled up in his cruiser, and walked Gray to her car, staying to make sure it started.

During their walk, Gray asked Collier how long he had been on the force. “It had been a relatively short time,” Gray recalled. “But it was the job of his dreams. … I feel really privileged to have met him.”

In the months since Collier’s death, Gray has made a habit of stopping by the impromptu memorial to him while walking to and from her car.

“It’s a small thing, but I pause, and if some flowers have fallen over, I pick them up, and it just feels I need to do something for him,” Gray said. “I see some of the same people there every morning.”

Sogna Scott, an administrative assistant in the Department of Facilities, shares Gray’s impulse. Shortly after Collier’s death, she and a colleague, locksmith Sharon Clute, began a campaign to raise money for a permanent memorial. Scott had never met Collier, but said his death hit close to home: The night he was killed, her mother was working in the adjacent Koch Institute for Integrative Cancer Research, and her cousin was in the neighboring Stata Center.

“It was a very emotional thing,” said Scott, who has received many donations from surrounding communities and businesses for the Facilities Collier Memorial Fund. “You see how it affected everybody. This wasn’t just a little incident that happened locally.”

On Friday night, at 10 p.m. — approximately the time of Collier’s death — members of the MIT Police will gather at the memorial site for a candlelight vigil — a small gesture, DiFava said, to remember their friend.

“I don’t know how much healing we’ve done, and I think these little steps along the way help us find that direction,” DiFava told MIT News. “The highest tribute we can pay Sean Collier is to never forget him. We can’t bring him back, but we can never forget him, and I think we owe him that.”

Hailing from a small town in Italy, Matteo Bucci is determined to address some of the unknowns plaguing fundamental science.

The paper test measures the level of neutralizing antibodies in a blood sample and could help people decide what protections they should take against infection.