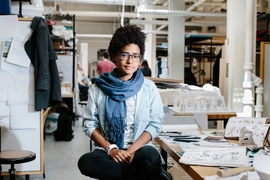 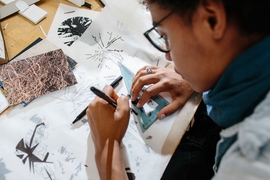 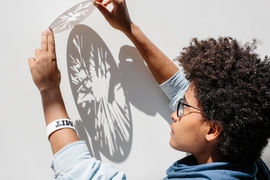 MIT senior Tiandra Ray views her field of study — architecture — as less about buildings and more about the people who use them. Growing up in Queens, New York, and on Long Island with strong ties to her local church, her life’s focus has always faced outward, on serving communities — a perspective that’s ever-present in the design work she does today.

“My goal is to solve problems,” she says. “I believe that aesthetics and beauty have to go hand-in-hand with functionality, and I want to know how a space I design will affect people’s lives and their communities.”

Ray’s specialty within architecture is computational design, which hinges on 3-D modeling and digital fabrication. She chose this track because she wanted a flexible learning environment, and computational design would allow her to work with computers, as well as build things with her hands. As someone who perennially extends herself across far-reaching interests — in high school she was active in her class council, in theater, and in sports — it was important to find a career that would allow her to do the same. Architecture, at the confluence of art, math, and physics, was a perfect fit.

In January 2014, Ray traveled to Makuleke Village, South Africa, to work on a library that also serves as a community center. The idea started as an MIT D-Lab class project during the previous semester, in conjunction with the organization Sharing to Learn, which commissioned the project, and the U.S. Africa Children’s Fellowship.

After spending a semester working on the design in class, Ray and three classmates visited the village, where the disconnect between her theoretical coursework and the reality of life immediately confronted her.

“We went in thinking we had this solution [to their community needs], but the complex reality is that we don’t live there, and we don’t know these people,” she says.

For the most part, their design worked — Sharing to Learn had asked for a library with open study spaces and areas for group movie watching — but it was her mindset that didn’t work. Ray recalls trying to impart what she calls “MIT efficiency,” while the community members insisted that the group take breaks for dinner or to just talk and get to know everyone. Ultimately, Ray says, living in the village with the people who would someday use the library helped inform the final design, and she found the experience humbling. It also helped her hit the reset button on her approach to learning once she returned to campus.

“It was good to step out of the MIT bubble and really think about what my values are, who I am as a person, and what I’m trying to do,” she says. “It’s easy to get caught up in pleasing your professors and just getting that degree, but there is so much more to learning, and I had kind of lost touch with that before I went to South Africa.”

She continued work on the project through MIT’s Undergraduate Research Opportunities Program during the spring 2014 semester, and its implementation in Makuleke Village is now imminent. Sharing to Learn recently received additional funding for the library, and Ray will be returning to South Africa this summer, along with fellow MIT senior Aurimas Bukauskas, to continue their work.

In keeping with her interest in flexible learning, this winter Ray interned at a small architecture firm in Somerville, Massachusetts, called Reverse Architecture, which focuses more on residential design. She was tasked with conceptualizing the handrail for a spiral staircase in a New York townhouse, and with conducting research on Boston’s Bowdoin Street, designing the lobby for a microunit apartment complex that is now under construction.

The experience, she says, gave her insight into all aspects of managing and designing architectural projects. And she’s enjoyed being able to travel to the sites and meet other people involved in the projects as she’s working on the design, instead of after the design is done, as in South Africa. This summer, in addition to traveling back to South Africa for a few months, she will also return to Reverse Architecture to start building railing prototypes that will involve both computation and hands-on building.

“I want to have the full toolbox of working with firms that tackle big projects, in addition to small scale, community-focused projects,” she says.

For most of this year, Ray’s main focus has been her senior thesis, which evaluates how built environments affect mental health. She’s using MIT as a case study, looking at how MIT might mitigate the stresses that students face — carrying a heavy workload, living away from home, and trying to integrate into a new community — through deliberate alterations in existing architectural design.

She’s suggesting small-scale, non-infrastructural changes that would be easy to implement, with a particular focus on incorporating natural light (or sunlamps) and nature patterns into indoor spaces. Over spring break, Ray traveled to San Diego, where she spent time hiking and photographing naturally occurring patterns and geometric shapes that she’s now abstracting for use in indoor spaces, to mimic the outdoor environment.

She hopes that some of the changes she proposes can positively affect students’ attention spans, sleep cycles, productivity, and thought organization. Ray ultimately plans to attend graduate school, but not immediately after graduation next month. In the future, she foresees her thesis — conducted in conjunction with Larry Sass, John Ochsendorf, and Marlene Kuhn of the Department of Architecture — being a bigger project than just one that focuses on MIT.

“This is just the beginning,” she says. “Mental health is such a huge topic, and I think we need to start taking a holistic approach. It’s more than just psychology; the spaces that we live and work in play a role, too.”

Tell me about your day, MIT