Tell me about your day, MIT 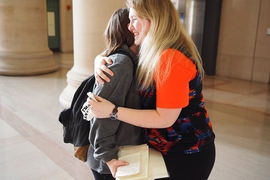 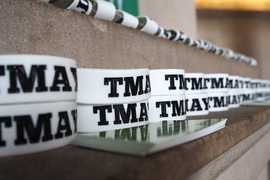 ↓ Download Image
Caption: Nearly 2,000 TMAYD wristbands have been handed out to members of the MIT community.
Credits: Maia Weinstock/MIT 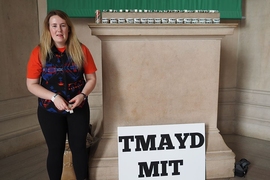 ↓ Download Image
Caption: “People at MIT are so focused on their work and bettering themselves that we often don’t take the time to show that we care about other people,” says TMAYD founder Izzy Lloyd.
Credits: Maia Weinstock/MIT

Caption:
Nearly 2,000 TMAYD wristbands have been handed out to members of the MIT community.
Credits:
Photo: Maia Weinstock/MIT

Caption:
“People at MIT are so focused on their work and bettering themselves that we often don’t take the time to show that we care about other people,” says TMAYD founder Izzy Lloyd.
Credits:
Photo: Maia Weinstock/MIT

How do you launch a cultural shift at an institution? If you’re first-year MIT student Isabel "Izzy" Lloyd, you start with wristbands. Lloyd recently launched Tell Me About Your Day (TMAYD), a new wristband campaign and acronym that she hopes the MIT community will fully adopt.

Moved by the unity of the MIT community after student losses this year, Lloyd wanted to do something to show support without being prompted by tragedy. “People at MIT are so focused on their work and bettering themselves that we often don’t take the time to show that we care about other people,” says Lloyd, whose white TMAYD wristbands are a hard-to-miss symbol of community and caring. By wearing the wristbands, students and faculty alike show that they are available to talk or offer support.

Lloyd chose the five-letter TMAYD to match up with another acronym popular around MIT: IHTFP. As students know, IHTFP has two different meanings, one positive and one borne out of frustration. Lloyd says she wants TMAYD to be a bridge between the two meanings, encouraging students to connect with others before feeling the dark side of IHTFP.

To launch the TMAYD campaign, Lloyd personally purchased 200 wristbands and began handing them out in Lobby 7 in late March. With the support of grants from the Student Activities Office, Lloyd and friends have now handed out nearly 2,000 wristbands. She says the wristbands are already having an impact on camps. “One day we gave out 500 wristbands in Lobby 7 and the next day I had 80 to 90 people come up to me and ask me how my day was,” she says. Lloyd says students and faculty alike have approached her to say they’ve noticed a positive cultural shift on campus because of the bands.

Class of 1942 Professor of Architecture and Professor of Civil and Environmental Engineering John Ochsendorf is one faculty member who’s noticed a shift. Ochsendorf struck up a conversation with Lloyd thanks to the wristbands and invited her to join a faculty meeting to talk about TMAYD.

“Because of the campaign, I have been taking more time in meetings with both students and faculty to talk about broader issues and to make sure that people are doing OK,” Ochsendorf says. “The TMAYD campaign is both simple and powerful.”

TMAYD wristbands can now spotted all around campus, but that doesn’t mean the campaign is complete. Lloyd has secured a grant from the Everett Moore Baker Memorial Foundation to purchase wristbands for members of the Class of 2019 to be distributed during orientation, as a way to re-launch the campaign in the fall. Lloyd even sees the campaign spreading to other colleges, the greater Boston community, and MIT alumni.

Until then, Lloyd and TMAYD will continue to push for change on MIT’s campus, with lots of support. Says Ochsendorf, “Izzy reminds me that we are a small community. I only met her a few weeks ago and now it seems that we see each other almost every day. She is living proof that change begins one person at a time.”

MIT freshman Isabel "Izzy" Lloyd has launched a campaign aimed at fostering dialogue between students, reports Priska Neely for NPR. Lloyd created and distributed wristbands that read, “TMAYD MIT” or “Tell Me About Your Day.” She explains that "it's a good way to check in and it spans all different kinds of conversations.”