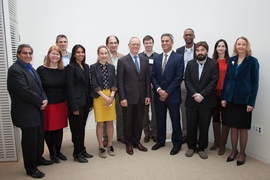 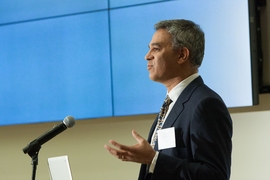 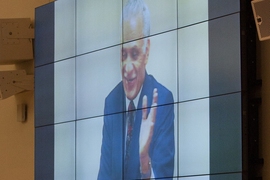 Caption:
A projected image of the late Amar Bose, a longtime member of the MIT faculty and the founder of Bose Corporation
Credits:
Photo: John Gillooly

Magnetism-sensing worms, ancient violins, ionic liquids, and malaria microbes — these are the subjects of the latest research projects to be supported by the Professor Amar G. Bose Research Grants.

In the third round of grants since the program launched in 2014, four MIT faculty members — Polina Anikeeva, Martin Bazant, Nicholas Makris, and Jacquin Niles — have been selected for their innovative and unconventional proposed projects. The awardees presented their projects to MIT President L. Rafael Reif and other invited guests at a reception Monday evening.

The grant program is named for the late Amar Bose, a longtime member of the MIT faculty and the founder of Bose Corporation, who pursued similarly unconventional research visions. “My dad really was driven by curiosity and would do research into whatever drove his curiosity,” says his son Vanu Bose ’88, SM ’94, PhD ’99.

“I’m impressed with both the quantity and quality of the proposals that we get each year, and I hope in the future we can fund more of them than we are today. Our goal is to attract other sources of funding to this program, as a different and better way of funding basic research,” says Vanu Bose. “We’re not short on ideas.”

Anikeeva, the Class of 1942 Career Development Professor in the Department of Materials Science and Engineering, will delve into the mechanisms behind the poorly understood magnetic sensing abilities of some worms and migratory birds — and the possibility of conferring such abilities to mammals.

“As a materials scientist and neural engineer, I rarely get to engage in a basic biophysics project, as it is difficult to secure stable research funding for ideas outside one’s immediate area of expertise,” Anikeeva says. “Within the Bose project, together with my students, I look forward to applying our understanding of nanomagnetism to studying biophysical mechanisms of magnetosensation in several organisms.”

The natural world has many methods for sensing the Earth’s magnetic field, which can help organisms navigate. Some of these mechanisms are well-understood by researchers; migratory butterflies, for example, use sunlight to produce magnetism-sensitive molecules, while some bacteria contain iron particles that align along a magnetic field.

Other magnetism-sensing creatures remain enigmatic. Pigeons are able to navigate in a magnetic field even without light. And C. elegans, a type of roundworm, has been shown to use magnetic sensing to find food; hungry worms from the Northern and Southern Hemisphere burrow in opposite directions in a magnetic field — both trying to burrow “down,” deeper in the soil to find nutrients. Previous studies suggested that these worms’ magnetic sensing is genetically encoded. When researchers knocked out the gene that coded for a particular protein, the worms lost their magnetic abilities.

Anikeeva and her team aim to determine how exactly these birds and worms are able to sense magnetism — which genes could be involved, what those genes produce, and if it might be possible to transfer these genes and abilities to mammalian cells. The idea has intrigued Anikeeva since her days as a postdoc, when she hypothesized that magnetic fields could be used to non-invasively stimulate neurons in the brain.

“The concept of being able to sense magnetic fields directly … [has] persisted on the back of my mind,” she wrote in her proposal. “The Bose Grant [provides] me with a rare opportunity to fulfill my curiosity.”

Bazant, a professor of chemical engineering and mathematics, seeks to explore the theory behind room-temperature ionic liquids, which could be powerful substances for energy storage but whose properties and behavior are not well understood.

Ionic liquids are mixtures of charged molecules — the ions themselves form the liquid; they are not dissolved in water or another solvent — that Bazant describes as “effectively condensed plasma” with unusual properties. They are safe and stable at high voltages, making them ideal for use in batteries.

“Room-temperature ionic liquids hold great promise … but their physical properties are poorly understood and difficult to predict,” Bazant wrote in his proposal.

Bazant aims to develop the theories behind ion transport and reactions in ionic liquids, on a molecular level. Such theories would enable researchers to model and predict how different ions and additives will affect the properties of such a substance, and to create liquids well suited for various purposes.

"The Bose Research Grant will allow me to develop more sophisticated molecular simulations for studying the fundamental properties of ionic liquids, which could someday be used for ultrafast rechargeable batteries," Bazant says.

"Just as Prof. Bose supported research on the simulation of sound in buildings and achieved unexpected success, this grant may trigger advances not only in batteries, but also in supercapacitors, actuators, and green chemistry enabled by new 'fast' ionic liquids," Bazant wrote.

Makris, a professor of mechanical engineering, will continue a project that he and colleagues have been pursuing for seven years in their spare time out of passion and curiosity. In collaboration with Yuming Liu, a principal research scientist in mechanical engineering, Makris is exploring the fundamental physics behind masterfully crafted string instruments from the Renaissance and Baroque periods, such as Stradivarius violins.

“High-quality stringed instruments from violins, cellos, and viols, to guitars, lutes, and ouds are still made by master craftsmen typically using intuitive methods,” Makris wrote in his proposal. “Highly inefficient reverse engineering is required for attempted replication. Our ultimate goal is to try to help quantify the physical mechanisms leading to excellent stringed instruments so that knowledge can be passed on in a more efficient manner.”

Makris and Liu explained in a recent paper the physics behind air resonance in violins and how this phenomenon developed as violins evolved from their less efficient ancestors to become the acoustically powerful, lightweight instruments they are today. The researchers tested and modeled how aspects like the f-shaped holes in the instruments and the thickness of the wooden back affect the airflow and sound. But air resonance is only one piece of the violin’s spectrum of sound; now, the researchers aim to understand that entire spectrum, frequency by frequency.

“We hope much progress can now be made in understanding with quantitative physics how the design of some stringed instruments mysteriously evolved over centuries to enable such exceptionally high levels of performance,” Makris says. “Ultimately, this research could help to make better musical instruments available to more people and help to reveal the mechanisms by which key icons of world culture evolved."

"Innovative research thrives on innovative funding,” adds Makris. “We are very grateful to the Bose Research Grant for providing the nourishment that will enable our work to continue.”

Turning an enemy into an ally

Many would call the malaria microbe a parasite, a disease agent, or a target. But Niles, an associate professor of biological engineering, thinks there’s much more to the organism.

The very characteristics that make malaria a nasty disease — its ability to replicate and survive in the human bloodstream, its resistance to immune response — also make it an excellent natural platform for drug delivery, Niles explained in his proposal.

“Malarial organisms … represent a novel chassis for engineering microbe-based solutions for producing therapeutically valuable molecules within the circulatory system,” he wrote. His team aims to alter the genes of the malaria microbe to remove the undesirable aspects, keep the desired characteristics, and add a treatment — snip out the genes that would allow for transmission by mosquitoes, and stick in genes that would create helpful substances.

The human body already partners naturally with microbes — for example, “gut bacteria” in our intestinal tract help us with digestion, immunity, diabetes, and obesity — but Niles’ proposal is novel in that it suggests introducing circulating microbes in the human bloodstream and turning a parasitic enemy into a mutually beneficial ally.

“The human circulatory system is traditionally considered to be a sterile compartment, where the presence of microbes is strictly considered to be an indication of disease,” Niles wrote in his proposal. “By engineering these organisms to produce therapeutic molecules and simultaneously inducing clinical immunity to them, this relationship is converted into a mutualistic one.”

Niles notes that the idea of repurposing malaria microbes to help rather than harm may be repugnant at first, in a time when most malaria-related research seeks to eradicate the disease. But he believes that over time, the project could have a large impact.