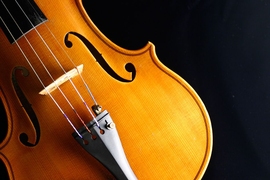 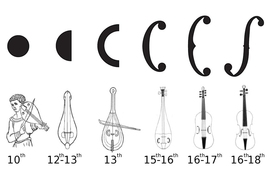 ↓ Download Image
Caption: From the 10th to 18th centuries, the sound holes of the violin, and its ancestors, evolved from simple circles to more elongated f-holes.
Credits: Courtesy of the researchers 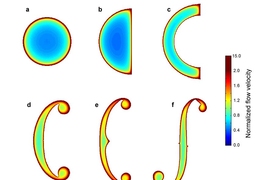 ↓ Download Image
Caption: Researchers found most of the sound produced from the violin and its ancestors flows through a sound hole's perimeter, not its interior.
Credits: Courtesy of the researchers

Caption:
From the 10th to 18th centuries, the sound holes of the violin, and its ancestors, evolved from simple circles to more elongated f-holes.
Credits:
Courtesy of the researchers

Caption:
Researchers found most of the sound produced from the violin and its ancestors flows through a sound hole's perimeter, not its interior.
Credits:
Courtesy of the researchers

Some of the most prized violins in the world were crafted in the Italian workshops of Amati, Stradivari, and Guarneri — master violinmaking families from the 17th and 18th centuries who produced increasingly powerful instruments in the renaissance and baroque musical eras. These violins, worth millions of dollars today, represent the Cremonese period — what is now considered the golden age of violinmaking.

Now acousticians and fluid dynamicists at MIT, along with violinmakers at the North Bennet Street School in Boston, have analyzed measurements from hundreds of Cremonese-era violins, identifying key design features that contribute to these particular violins’ acoustic power, or fullness of sound.

The team acquired technical drawings of Cremonese-era violins from museums, collector databases, and books, as well as X-ray and CAT scans of the instruments. They compared the dimensions of various features from one instrument to another, as well as measurements of acoustic resonances across instruments.

The researchers found that a key feature affecting a violin’s sound is the shape and length of its “f-holes,” the f-shaped openings through which air escapes: The more elongated these are, the more sound a violin can produce. What’s more, an elongated sound hole takes up little space on the violin, while still producing a full sound — a design that the researchers found to be more power-efficient than the rounder sound holes of the violin’s ancestors, such as medieval fiddles, lyres, and rebecs.

The thickness of a violin’s back plate also contributes to its acoustic power. Violins carved from wood are relatively elastic: As the instrument produces sound, the violin’s body may respond to the air vibrations, contracting and expanding minutely. A thicker back plate, they found, would boost a violin’s sound.

The researchers found that as violins were crafted first by Amati, then Stradivari, and finally Guarneri, they slowly evolved to more elongated f-holes and thicker back plates.

But were the design changes intentional? To answer this question, the researchers worked the measurements from hundreds of Cremonese-era violins into an evolutionary model, and found that any change in design could reasonably be explained by natural mutation — or, in this case, craftsmanship error.

In other words, makers may have crafted violins with longer sound holes and thicker back plates not by design, but by accident.

“We found that if you try to replicate a sound hole exactly from the last one you made, you’ll always have a little error,” says Nicholas Makris, a professor of mechanical and ocean engineering at MIT. “You’re cutting with a knife into thin wood and you can’t get it perfectly, and the error we report is about 2 percent … always within what would have happened if it was an evolutionary change, accidentally from random fluctuations.”

Makris stresses that while each violinmaker inarguably possessed a good ear — in order to recognize and replicate the violins that sounded best — whether they recognized the particular design elements that contribute to a more powerful sound is still up for debate.

Makris and his colleagues from MIT and the North Bennett Street School publish their results this week in the Proceedings of the Royal Society: A.

Makris didn’t originally set out to study violin acoustics: His work is primarily in ocean exploration with acoustics, developing and applying technology to sense marine life and ocean phenomenon over large areas. But about a decade ago, he took up a new hobby, playing the lute.

“I’m an acoustics expert, but promised myself I wouldn’t think about the acoustics of the instrument, I’m just going to play the thing,” Makris remembers.

That thinking didn’t last long, as Makris started talking with lutemakers and players in an effort to better understand the instrument — which was once Europe’s most popular, but became effectively extinct for centuries before its recent re-emergence. The lute is much quieter than the violin: In addition to other design differences, its sound holes are circular rather than f-shaped, with elaborate interior carvings known as rosettes, inherited from the lute’s Middle Eastern ancestor, the oud.

Several years ago, a noted lute player approached Makris with an intriguing quandary: Do the carvings within a lute’s sound hole make a difference to the overall sound produced? Makris realized that the relevant frequencies of sound were in the range where airflow through the sound hole behaves nearly as an incompressible fluid, and enlisted the help of Yuming Liu, a principal research scientist in MIT’s Department of Mechanical Engineering.

The team modeled the airflow through a simple round hole, as well as a more elaborately patterned hole of the same diameter, and found that in both cases, the air flowed fastest at the hole’s periphery; its interior, whether open or partially filled, did not significantly affect the airflow.

Answering the musician’s simple question turned into a seven-year project in which the team examined the acoustic dynamics of stringed instruments through time, from the oud, lute, and medieval fiddles to the guitar and ultimately the violin — a period spanning from the 10th century to the 18th century. Analysis of the violin came at the urging of team member Roman Barnas, director of violinmaking and repair at the North Bennet Street School, an expert on the construction of early instruments.

Throughout the 800-year period the researchers examined, they noted an evolution in sound-hole shape — from a simple round hole to a semicircle, which eventually morphed into a c-shape that grew more elongated, ultimately assuming the f-shape of the violin. The perimeter of these shapes steadily grew, while the area of the interior void gradually decreased.

As with the evolution in length of the violin’s f-hole during the Cremonese period, Makris’ team found that the overall shape of the violin’s ancestors slowly evolved to be more powerful and more acoustically efficient — though not necessarily by design.

“We think these changes are still within the possibility of natural mutation,” Makris says. “All of these subtle parameters of shape, we’ve modeled, and are able to make very good predictions on what the effects will be on frequency and power.”

Makris says the group’s results may be useful for master violinmakers looking to design more powerful, fuller-sounding instruments — although he acknowledges that there’s more to producing a quality violin than adjusting a few parameters.

“Mystery is good, and there’s magic in violinmaking,” Makris says. “Some makers, I don’t know how they do it — it’s an art form. They have their techniques and methods. But here, for us, it’s good to understand scientifically as much as you can.”

This research was funded in part by the Office of Naval Research.

Adam Rutherford of BBC Radio 4 speaks with Prof. Nicholas Makris about his work examining the evolution of violin design during the 17th and 18th centuries. Makris explains that, “if you go over that roughly 200 years you see that the F-hole length was increasing over that time period,” an adjustment that increased the violin’s acoustic power.

The Naked Scientists feature Prof. Nicholas Makris explaining his research on the evolution of violin design and performing on the lute. Makris explains his finding that the violin’s “F-hole length increased from the Amati time period to the Guarneri time period," making the instrument's sound more powerful.

A new study conducted by MIT researchers examines the unique acoustical properties of Cremona-era violins’ F-shaped holes, writes Douglas Quenqua for The New York Times. “The scientists found that the length of the holes, not the width, and the strength of the back plate had the biggest effects on sound quality,” Quenqua explains.

The Economist writes about a new MIT study examining the development of violin design, which was found to have evolved by chance. The researchers also found that the shape and length of the violin’s “f-holes” give the instrument its acoustical power.

A new study conducted by researchers from MIT found that a violin’s acoustic power comes from the design of the instrument, writes Joseph Dussault of The Christian Science Monitor. The researchers also found that the “violin’s distinctive, f-shaped sound hole came not as a result of human ingenuity, but rather a series of random mutations.”

Devin Coldewey of NBC News writes about new MIT research into the evolution of violin design. The researchers found that “the characteristics of the instruments underwent changes surprisingly like evolution by natural selection,” Coldewey explains.

Making music in the Hobby Shop

How strong is a hurricane? Just listen