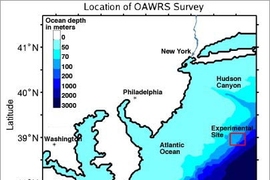 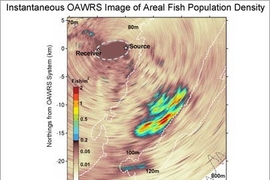 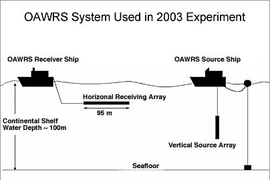 Researchers at MIT have found a new way of looking beneath the ocean surface that could help definitively determine whether fish populations are shrinking.

A remote sensor system developed by Associate Professor Nicholas Makris of mechanical engineering, along with others at MIT, Northeastern University and the Naval Research Laboratory, allows scientists to track enormous fish populations, or shoals, as well as small schools, over a 10,000-square-kilometer area -- a vast improvement over conventional technology that can survey only about 100 square meters at a time.

"We're able to see for the first time what a large group of fish looks like," said Makris, who compared the dramatic improvement to the difference between seeing everything on a television screen and seeing only one pixel.

The new sensor system, described in the Feb. 3 issue of Science, could allow government agencies to figure out what's really happening to fish populations, which many environmentalists and scientists believe are in rapid decline.

"The world's fish stocks are being depleted at a horrible rate," said Makris, who attributed declining populations to overfishing, a problem that has been abetted by inaccurate fish counts. "One of the reasons (for the inaccurate counts) is the darkness in the ocean. You don't know what's going on."

Current surveying methods depend on highly localized observations taken from slow-moving research vessels, which provide only a small amount of data about a large shoal, Makris said. "It would be like watching 'Casablanca' and you're seeing one pixel moving across the screen, and that's all you get. You can't figure out what's going on, it's way too slow," he said.

Both the new and old methods rely on sonar, which locates objects by bouncing sound waves off of them. With the old technique, survey vessels send high-frequency sonar beams into the ocean, where they dissipate much like the light from a flashlight shining into a darkened room.

In contrast, the new system uses low-frequency sonar that can travel much greater distances and still return useful information with signals far less intense. This effectively "illuminates" vast areas of the ocean, about a million times larger than what could previously be studied. The images can be updated every minute, offering a chance to continuously monitor the shoals as they change in size and shape over time.

The new technology works best along the continental shelf, so the researchers focused their attention on the waters south of Long Island, New York. When they first started, they weren't looking for fish at all -- they wanted to see if their device could locate ancient riverbeds under the ocean floor. But when their reconnaissance images did not match the riverbeds, the researchers went back with a new approach, and determined that they were seeing fish -- tens of millions of fish.

This marks the first time scientists have been able to see the patterns formed by large fish populations. Makris found that fish often congregate in an hourglass pattern, also found among other animals, with a thin "bridge" connecting the two ends. The researchers also observed that the same shapes seen in a small scale appear on larger scales -- tens of meters vs. tens of kilometers -- displaying a fractal pattern.

Population density patterns could be a means of communication, Makris said. His team observed "waves" of population density that spread quickly through a shoal. "We have a situation where information can be very rapidly transmitted with these waves," he said.

Co-authors on the paper are Purnima Ratilal (Ph.D. 2002) of Northeastern University; Deanelle Symonds, Srinivasan Jagannathan and Sunwoong Lee of MIT's Center for Ocean Engineering; and Redwood Nero of the Naval Research Laboratory.

The research was funded by the Office of Naval Research, the Alfred P. Sloan Foundation and the National Oceanographic Partnership Program, and is a contribution to the Census of Marine Life.

A version of this article appeared in MIT Tech Talk on February 8, 2006 (download PDF).