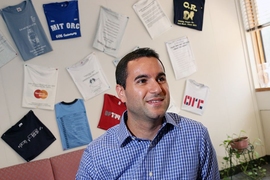 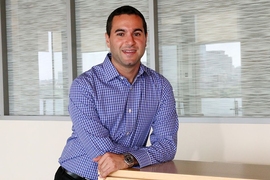 Maxime Cohen, a graduate student at the MIT Operations Research Center, could be doing just about anything now.

He could be an aerospace engineer — his field of study as an undergraduate at the Technion in Israel: In their senior year, Cohen and a few friends spent a semester building a solar-powered drone that could fly 75 kilometers in a single go. They won a Technion design competition, and later, an international contest in Texas.

Had money been sufficient motivation, he might still be working in finance, his first career after leaving the Technion with a master’s degree in electrical engineering. Or he could still be at the Israeli real estate firm he co-founded with his father and two friends: Cohen’s father brought decades of hands-on experience, while the younger partners supplied an analytical edge.

Were he solely an altruist, Cohen might have pursued his charitable work full-time: In college, he started an organization to help French immigrants to Israel adjust to their new environment. He also worked with low-income families in Haifa, where the Technion is located, providing groceries and helping children with homework.

But instead, Cohen is at MIT, as a PhD candidate advised by Georgia Perakis, the William F. Pounds Professor of Management at the MIT Sloan School of Management. Operations research applies mathematics and engineering methods to problems typically tackled with traditional business techniques; Cohen is obsessed with using these tools to develop solutions that address industry and government concerns.

Cohen has long been interested in green technology. At the Technion, he had the opportunity to meet Shai Agassi, the founder and former CEO of Better Place, an Israeli company that aims to develop a nationwide infrastructure to support the widespread adoption of electric vehicles.

At the time, Cohen says, he thought to himself: “Wow. This guy is extremely smart. He is so successful that he doesn’t need to work, but he’s still trying to do a very important and impactful project.”

So naturally, Cohen’s first project at MIT focused on green technology. Together with Perakis, Ruben Lobel of the University of Pennsylvania’s Wharton School, and fellow Operations Research Center graduate student Charles Thraves, he studied the expected outcomes of various government rebates for electric vehicles. A smart rebate policy is good for both consumers and government, he says, since it saves individual car buyers money, and encourages wider adoption of electric vehicles. For this work, Cohen received a Shell Fellowship from the MIT Energy Initiative in 2011, and a Martin Sustainability Fellowship in 2013.

Cohen’s next project looked at retail pricing in department and groceries stores. Together with Perakis, his classmate Zachary Leung, and collaborators from Oracle, he built a software model that used a grocery store’s sales history to recommend a schedule for what deals to offer when — a system, he says, that could yield a 3 to 4 percent increase in profits for stores, compared with current systems of pricing and discount scheduling.

This project is already being implemented: It’s currently undergoing a trial run with a retailer — Cohen can’t say which one — that has more than 150 locations across the United States.

“Now they trust our team, and they’re implementing it in the real world to see how it will impact things,” Cohen says. Together with his co-authors as well as the Oracle team, he has filed two patents for work in this area.

Cohen came to his latest research topic through an IBM internship with the team behind Watson, a computer system that can answer questions posed in natural language. (Watson is perhaps best known for competing successfully on the game show “Jeopardy!” in 2011.)

This project could have applications for social-media companies, such as Facebook and Twitter, that might want to be able to identify high-impact users within their networks: In this way, advertisers could target those users for special deals, knowing that habits adopted by high-impact users may prove contagious.

Identifying such users is difficult, but Cohen found ways to do it. Together with co-author Pavithra Harsha of IBM Research, he currently has a paper submitted for publication, and a patent filed in conjunction with IBM.

When Cohen takes on a task, he says, he pursues it with a full-throttle obsession. When he taught a recitation for an MIT Sloan MBA course, he would videotape himself giving a practice lecture, then watch the videos as a means of self-critiquing. It paid off: At the end of the semester, his recitation section gave him stellar reviews and a standing ovation.

“I felt so rewarded,” Cohen says.

In the past year, Cohen, together with Perakis, started collaborating with Robert Pindyck, the Bank of Tokyo-Mitsubishi Professor of Finance and Economics at MIT Sloan, to tackle a problem at the interface of operations and economics. They identified a simple method for pricing new products, such as drugs or digital items, by proposing a model and showing good performance guarantees for uncertain markets. Cohen, Perakis, and Pindyck are now finalizing a manuscript for publication.

“These were great opportunities that were challenging and yet very rewarding,” Cohen says of his various research areas. “I am always eager to work on solving new, interesting problems.”

Despite his intelligence and the voracity of his work ethic, though, Cohen doesn’t come across as intense. Mostly, it seems, Cohen does what he does not because of any feeling of obligation, but simply because he enjoys it.

“I really like challenges,” he says. “I’m happy and honored to be here at MIT, so grateful to be advised by Georgia, and I want to push myself as much as I can.”