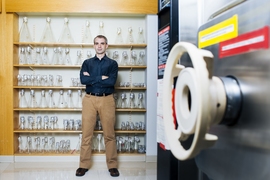 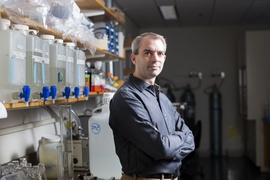 During your lifetime, the cells in your body divide many trillions of times. Iain Cheeseman, an associate professor of biology at MIT, has spent his career studying how cells control this process, which is critical to ensuring that the correct genetic information is passed down from generation to generation.

“We have 46 chromosomes, and every single one of those chromosomes is important. You have to make sure that they’re independently distributed to each new cell that’s made,” says Cheeseman, who is also a member of MIT’s Whitehead Institute for Biomedical Research.

Key to that process is the kinetochore, a cellular structure that holds onto each chromosome to guide it to the daughter cells during cell division. The kinetochore includes hundreds of proteins that interact with each other to maintain chromosomal stability. Cheeseman discovered many of these proteins, and has determined the functions of many more.

“I really love working on it,” he says. “The kinetochore achieves this really physical process of being able to grab onto each chromosome and move it. I like the way it acts as a machine. But what I always find particularly fascinating is not only those molecular machines within a cell, but how they are controlled. They have to be under really tight control by the cell to sense and correct errors.”

If uncorrected, those errors can be catastrophic for the cell, with the potential to contribute to cancer progression. In fact, about 90 percent of cancer cells have the wrong number of chromosomes.

Cheeseman grew up in Urbana, Ill., where both his parents worked at the University of Illinois at Urbana-Champaign — his mother as an administrator and his father as a plant biologist. During the summers, Cheeseman did odd jobs around campus, such as washing lab glassware.

In high school he wanted to be a veterinarian, but his interests turned to biology when he began college at Duke University. His first two years were taken up with prerequisites and general requirements, but during his junior year he studied abroad at the University of Edinburgh, where he found that he was far behind his peers in the biology program.

“I came into their third-year system and they were so far ahead of me it was overwhelming. I had a lot of catching up to do. But I loved it there, and I learned more science there than I probably did during any other year,” he says.

During college, Cheeseman worked in several different labs, studying plants, bacteriophages, and honeybees. However, in Scotland, the courses he took on the cell division cycle, taught by a professor named Peter Fantes, had the biggest impact. “I just found the cell cycle really beautiful, how reproducibly elegant it is. The mechanistic insights people had into how it worked were really impressive,” Cheeseman says.

In graduate school at the University of California at Berkeley, he began studying cell division in yeast, focusing on a set of proteins called DAM1, which he discovered were key components of the yeast kinetochore. “I came across this connection with the kinetochore, which I think is just the most fascinating structure in the cell. I fell in love with it even more as a specific machine and structure to look at,” he says.

As a postdoc at the University of California at San Diego, Cheeseman moved onto studying the kinetochore of the worm Caenorhabditis elegans. One of the proteins he worked on had a human equivalent, and at the urging of his wife, also a scientist, he began studying the human version. That decision changed the course of Cheeseman’s research, nearly all of which he now does in human cells. “The same fundamental processes happen in model organisms, but it’s nice to truly understand the way the human proteins work,” he says.

Currently, many of the projects in Cheeseman’s lab relate to the architecture and organization of the kinetochore, including how it interacts with both chromosomes and microtubules. His lab uses a variety of experimental techniques to probe these questions.

“We do a lot of biochemistry to make proteins and understand how the proteins associate — how they bind to microtubules, for example, and how they’re regulated,” he says. “We use a lot of microscopy to image cell division processes. We modify cells, use RNA interference to get rid of proteins, and also to put in tagged proteins, including mutants, so we can do specific targeted analysis.”

In a study published in the journal Cell in July, a graduate student in Cheeseman’s lab, Kara McKinley, revealed new insights into how the kinetochore recognizes the correct chromosome location to bind to. In some species, such as yeast, this process depends on the DNA sequence at the centromere. However, that is not the case in human cells: Instead, the correct binding location is marked by a protein called CENP-A, which is found only at centromeres. This protein is recognized by a cascade of other proteins that recruit more CENP-A to the centromere when it is time for the cell to divide and form kinetochores. McKinley’s work defined the precise regulatory control that ensures this process occurs faithfully each time.

Cheeseman’s research could also lead to ways to create artificial human chromosomes with high efficiency, a goal that has so far eluded scientists. In 2011, Karen Gascoigne, then a postdoc in Cheeseman’s lab, discovered a kinetochore protein called CENP-T, which associates with other members of the Cenp family to form part of the kinetochore.

Wherever CENP-T is placed on a chromosome, it will recruit the proteins necessary to form the kinetochore, raising the possibility of creating artificial chromosomes that would replicate just like natural chromosomes inside living cells, which has been a huge challenge in human cells.

“This work told us a lot about the way the kinetochore is built, but it also provides a really valuable tool for being able to target kinetochore assembly and create artificial chromosomes,” Cheeseman says.