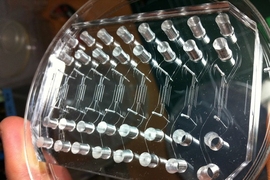 ↓ Download Image
Caption: This image shows multiple microfluidic sites in a single system that can be used to conduct many experiments simultaneously.
Credits: Photo courtesy of Roger Kamm 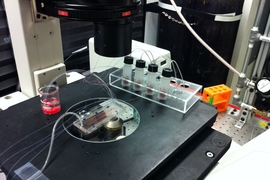 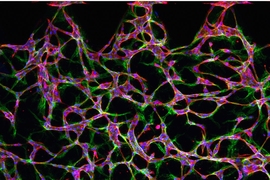 ↓ Download Image
Caption: A microscopic image of endothelial cells suspended in a central region of a microfluidic device, showing the initial stages in the formation of a network of vessels.
Credits: Image courtesy of Roger Kamm

Caption:
This image shows multiple microfluidic sites in a single system that can be used to conduct many experiments simultaneously.
Credits:
Photo courtesy of Roger Kamm

Caption:
A microscopic image of endothelial cells suspended in a central region of a microfluidic device, showing the initial stages in the formation of a network of vessels.
Credits:
Image courtesy of Roger Kamm
With the recent launch of MIT’s Institute for Medical Engineering and Science, MIT News examines research with the potential to reshape medicine and health care through new scientific knowledge, novel treatments and products, better management of medical data, and improvements in health-care delivery.

To understand the progression of complex diseases such as cancer, scientists have had to tease out the interactions between cells at progressively finer scales — from the behavior of a single tumor cell in the body on down to the activity of that cell’s inner machinery.

To foster such discoveries, mechanical engineers at MIT are designing tools to image and analyze cellular dynamics at the micro- and nanoscale. Such tools, including microfluidics, membrane technology and metamaterials, may help scientists better characterize and develop therapies for cancer and other complex diseases.

“What we’ve learned so far is more or less the architecture of cells, and the next layer is the dynamics of cells,” says Fang, who is developing optical sensors to illuminate individual components within a cell. “Cells operate like a city, or a metropolitan area: You have traffic, flow of information, and logistics of materials, and responses related to different events. Medicine requires new modes of seeing these events with better precision in time and space.”

Fang is developing new imaging tools from metamaterials — materials engineered to exhibit properties not normally found in nature. Such materials may be designed as “superlenses” that bend and refract light to image extremely small objects. For example, Fang says that today’s best imaging tools can capture signaling between individual neurons, which may appear as a fuzzy “plume” of neurotransmitters. A superlens, in contrast, would let scientists see individual neurotransmitter molecules at the scale of a few nanometers. Such acuity, he says, would allow scientists to identify certain chemical transmitters that are directly related to particular diseases.

Metamaterials may also help scientists manipulate cells at the microscale. Fang is exploring the use of metamaterials as optical antennae to improve a technique known as optogenetics. This technique, developed in 2005 (and pioneered by MIT’s Ed Boyden, the Benesse Career Development Associate Professor of Research in Education), involves genetically engineering proteins to respond to light. Using various colors of light, scientists may control the activity or expression of such proteins to study the progression of disease. However, researchers have found that the technique requires a large amount of light to prompt a response, risking overheating or damaging the proteins of interest.

To solve this problem, Fang and his colleagues are looking to metamaterials to design tiny optical receivers, similar to radio antennae. Such receivers would attach to a given protein, boosting its receptivity to light, and thereby requiring less light to activate the protein. The project is in its initial stages; Fang says his group is now seeking materials that are compatible with proteins and other biological tissues.

MIT researchers are also developing tools to sort individual cells — part of an effort to provide simple, cost-effective diagnostic tools for certain diseases. Rohit Karnik, an associate professor of mechanical engineering, is approaching cell sorting from a variety of directions. His lab is fabricating microfluidic, or “lab-on-a-chip,” devices — chips as small as a dime that efficiently sort cells, separating out those of interest from a sample of blood or biological fluid.

Karnik’s group employs nanofabrication techniques to etch tiny, precisely patterned channels into small squares of polymer. The arrangement of the channels directs fluid, capturing cells of interest via “cell rolling,” a phenomenon by which cells roll to one side of a channel, attracted by a wall’s surface coating. The device is a relatively simple, passive cell-sorter that Karnik says may efficiently sort out material such as white blood cells — cells that may quickly be counted to identify conditions such as sepsis and inflammation.

Karnik is also developing small membranes punctured with microscopic pores. Each pore is a few nanometers wide, small enough to let individual DNA molecules through. By passing an electric current through the nanopore, the researchers can measure certain characteristics of a DNA molecule, such as its size and the presence of any additional proteins bound to it.

Such membrane technology may drastically simplify the process of sizing DNA molecules and mapping DNA modifications, which are critical for understanding gene regulation and the dynamics of cellular machinery — now a lengthy process that involves expensive bench-top instruments. Instead, Karnik says, nanopore membranes may be a faster, cheaper alternative that could work with single DNA molecules with no loss of information from DNA-amplification steps.

Cancer in a chip

Researchers are investigating microfluidics not only as a means to sort cells, but as a way of replicating whole biological environments at the microscale.

“We use microfluidics to develop more realistic models of organs and human physiology so that we can look at, for example, how a tumor cell interacts with other cells in the local environment,” says Roger Kamm, the Cecil and Ida Green Distinguished Professor of Biological and Mechanical Engineering.

Kamm and his colleagues have developed a microfluidic chip that contains tiny channels and reservoirs, in which they can seed various cell types. The group is using the device to study how cancer spreads through the body. Cancer becomes metastatic when tumor cells break off from a primary tumor and cross through a blood vessel wall and into the bloodstream. Kamm is using the group’s microfluidic designs to mimic the metastatic process and identify agents to prevent it.

To replicate the lining of a blood vessel, Kamm seeds one channel in the chip with endothelial cells. In a neighboring channel, he injects a gel, mimicking the body’s extracellular matrix. The group can introduce tumor cells into the gel, along with other chemical agents. In the controlled setup, they can monitor the behavior of tumor cells, and the conditions in which the cells penetrate the endothelial lining, in order to enter a blood vessel.

“This allows us to put cells in close proximity so they can signal with each other in a more realistic fashion,” Kamm says.

Compared with conventional cancer-screening techniques, the microfluidic technique more closely resembles natural processes in the body, Kamm says. For example, pharmaceutical companies tend to test potential drugs in large batches, injecting a drug into tiny, isolated wells containing tumor cells. That works well to test for drugs that kill the tumor, but not so well for identifying drugs that can prevent metastatic disease.

“What we’re finding is that cells behave completely differently when you have a realistic environment, with cells communicating with different cell types, and when a cell is in a three-dimensional matrix, as opposed to when you have a single cell type inside a well on a two-dimensional, rigid surface,” Kamm says. “High-throughput systems probably miss a lot of potentially good drugs, and they also identify drugs that fail at subsequent stages of testing.”

Karnik, who has collaborated with Kamm on a few lab-on-a-chip designs, sees such devices and other engineering tools as a key connection in pushing medical discoveries, and effective therapies, forward.

“A clinician might say, ‘I need to know whether the patient has this disease or that disease,’ and the biologist would say, ‘Oh, in order to do that, you need to measure molecules A, B and C,’ and it’s up to the engineers to figure out how to do it,” Karnik says. “That’s our key role, bridging in between.”

DELPHI, an artificial intelligence framework, can give an “early-alert” signal for future key technologies by learning from patterns gleaned from previous scientific publications.

The new concentration extends the options for Asian languages at MIT, which also include Japanese and Mandarin.

3 Questions: President Reif on the search for MIT’s next chancellor