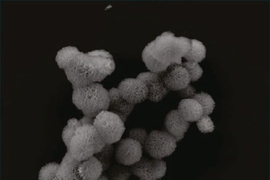 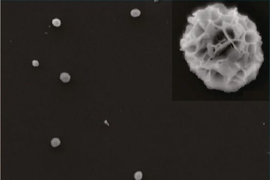 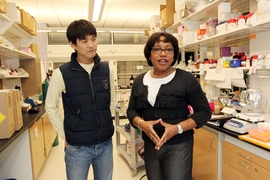 Caption:
A cluster of microsponges made of long strands of folded RNA, as seen by scanning electron microscopy.
Credits:
Image: Hammond laboratory
For the past decade, scientists have been pursuing cancer treatments based on RNA interference — a phenomenon that offers a way to shut off malfunctioning genes with short snippets of RNA. However, one huge challenge remains: finding a way to efficiently deliver the RNA.

Most of the time, short interfering RNA (siRNA) — the type used for RNA interference — is quickly broken down inside the body by enzymes that defend against infection by RNA viruses.

“It’s been a real struggle to try to design a delivery system that allows us to administer siRNA, especially if you want to target it to a specific part of the body,” says Paula Hammond, the David H. Koch Professor in Engineering at MIT.

Hammond and her colleagues have now come up with a novel delivery vehicle in which RNA is packed into microspheres so dense that they withstand degradation until they reach their destinations. The new system, described Feb. 26 in the journal Nature Materials, knocks down expression of specific genes as effectively as existing delivery methods, but with a much smaller dose of particles.

Such particles could offer a new way to treat not only cancer, but also any other chronic disease caused by a “misbehaving gene,” says Hammond, who is also a member of MIT’s David H. Koch Institute for Integrative Cancer Research. “RNA interference holds a huge amount of promise for a number of disorders, one of which is cancer, but also neurological disorders and immune disorders,” she says.

RNA interference is a naturally occurring process, discovered in 1998, that allows cells to fine-tune their genetic expression. Genetic information is normally carried from DNA in the nucleus to ribosomes, cellular structures where proteins are made. siRNA binds to the messenger RNA that carries this genetic information, destroying instructions before they reach the ribosome. 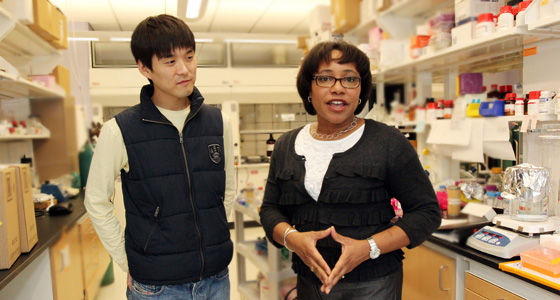 Scientists are working on many ways to artificially replicate this process to target specific genes, including packaging siRNA into nanoparticles made of lipids or inorganic materials such as gold. Though many of those have shown some success, one drawback is that it’s difficult to load large amounts of siRNA onto those carriers, because the short strands do not pack tightly.

To overcome this, Hammond’s team decided to package the RNA as one long strand that would fold into a tiny, compact sphere. The researchers used an RNA synthesis method known as rolling circle transcription to produce extremely long strands of RNA made up of a repeating sequence of 21 nucleotides. Those segments are separated by a shorter stretch that is recognized by the enzyme Dicer, which chops RNA wherever it encounters that sequence.

As the RNA strand is synthesized, it folds into sheets that then self-assemble into a very dense, sponge-like sphere. Up to half a million copies of the same RNA sequence can be packed into a sphere with a diameter of just two microns. Once the spheres form, the researchers wrap them in a layer of positively charged polymer, which induces the spheres to pack even more tightly (down to a 200-nanometer diameter) and also helps them to enter cells.

After the spheres enter a cell, the Dicer enzyme chops the RNA at specific locations, releasing the 21-nucleotide siRNA sequences.

Peixuan Guo, director of the NIH Nanomedicine Development Center at the University of Kentucky, says the most exciting aspect of the work is the development of a new self-assembly method for RNA particles. Guo, who was not part of the research team, adds that the particles might be more effective at entering cells if they were shrunk to an even smaller size, closer to 50 nanometers.

In the Nature Materials paper, the researchers tested their spheres by programming them to deliver RNA sequences that shut off a gene that causes tumor cells to glow in mice. They found that they could achieve the same level of gene knockdown as conventional nanoparticle delivery, but with about one-thousandth as many particles.

The microsponges accumulate at tumor sites through a phenomenon often used to deliver nanoparticles: The blood vessels surrounding tumors are “leaky,” meaning that they have tiny pores through which very small particles can squeeze.

In future studies, the researchers plan to design microspheres coated with polymers that specifically target tumor cells or other diseased cells. They are also working on spheres that carry DNA, for potential use in gene therapy.