The findings could redefine the kinds of particles that were abundant in the early universe.
Jennifer Chu | MIT News Office
Publication Date:
Press Inquiries 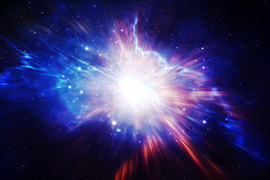 ↓ Download Image
Caption: Physicists have found evidence of rare X particles in the quark-gluon plasma produced in the Large Hadron Collider (LHC) at CERN. The findings could redefine the kinds of particles that were abundant in the early universe.
Credits: Image: iStockphoto

Caption:
Physicists have found evidence of rare X particles in the quark-gluon plasma produced in the Large Hadron Collider (LHC) at CERN. The findings could redefine the kinds of particles that were abundant in the early universe.
Credits:
Image: iStockphoto

In the first millionths of a second after the Big Bang, the universe was a roiling, trillion-degree plasma of quarks and gluons — elementary particles that briefly glommed together in countless combinations before cooling and settling into more stable configurations to make the neutrons and protons of ordinary matter.

In the chaos before cooling, a fraction of these quarks and gluons collided randomly to form short-lived “X” particles, so named for their mysterious, unknown structures. Today, X particles are extremely rare, though physicists have theorized that they may be created in particle accelerators through quark coalescence, where high-energy collisions can generate similar flashes of quark-gluon plasma.

Now physicists at MIT’s Laboratory for Nuclear Science and elsewhere have found evidence of X particles in the quark-gluon plasma produced in the Large Hadron Collider (LHC) at CERN, the European Organization for Nuclear Research, based near Geneva, Switzerland.

The team used machine-learning techniques to sift through more than 13 billion heavy ion collisions, each of which produced tens of thousands of charged particles. Amid this ultradense, high-energy particle soup, the researchers were able to tease out about 100 X particles, of a type known as X (3872), named for the particle’s estimated mass.

The results, published this week in Physical Review Letters, mark the first time researchers have detected X particles in quark-gluon plasma — an environment that they hope will illuminate the particles’ as-yet unknown structure.

“This is just the start of the story,” says lead author Yen-Jie Lee, the Class of 1958 Career Development Associate Professor of Physics at MIT. “We’ve shown we can find a signal. In the next few years we want to use the quark-gluon plasma to probe the X particle’s internal structure, which could change our view of what kind of material the universe should produce.”

The study’s co-authors are members of the CMS Collaboration, an international team of scientists that operates and collects data from the Compact Muon Solenoid, one of the LHC’s particle detectors.

Particles in the plasma

The basic building blocks of matter are the neutron and the proton, each of which are made from three tightly bound quarks.

“For years we had thought that for some reason, nature had chosen to produce particles made only from two or three quarks,” Lee says.

Only recently have physicists begun to see signs of exotic “tetraquarks” — particles made from a rare combination of four quarks. Scientists suspect that X (3872) is either a compact tetraquark or an entirely new kind of molecule made from not atoms but two loosely bound mesons — subatomic particles that themselves are made from two quarks.

X (3872) was first discovered in 2003 by the Belle experiment, a particle collider in Japan that smashes together high-energy electrons and positrons. Within this environment, however, the rare particles decayed too quickly for scientists to examine their structure in detail. It has been hypothesized that X (3872) and other exotic particles might be better illuminated in quark-gluon plasma.

“Theoretically speaking, there are so many quarks and gluons in the plasma that the production of X particles should be enhanced,” Lee says. “But people thought it would be too difficult to search for them because there are so many other particles produced in this quark soup.”

In their new study, Lee and his colleagues looked for signs of X particles within the quark-gluon plasma generated by heavy-ion collisions in CERN’s Large Hadron Collider. They based their analysis on the LHC’s 2018 dataset, which included more than 13 billion lead-ion collisions, each of which released quarks and gluons that scattered and merged to form more than a quadrillion short-lived particles before cooling and decaying.

“After the quark-gluon plasma forms and cools down, there are so many particles produced, the background is overwhelming,” Lee says. “So we had to beat down this background so that we could eventually see the X particles in our data.”

To do this, the team used a machine-learning algorithm which they trained to pick out decay patterns characteristic of X particles. Immediately after particles form in quark-gluon plasma, they quickly break down into “daughter” particles that scatter away. For X particles, this decay pattern, or angular distribution, is distinct from all other particles.

The researchers, led by MIT postdoc Jing Wang, identified key variables that describe the shape of the X particle decay pattern. They trained a machine-learning algorithm to recognize these variables, then fed the algorithm actual data from the LHC’s collision experiments. The algorithm was able to sift through the extremely dense and noisy dataset to pick out the key variables that were likely a result of decaying X particles.

“We managed to lower the background by orders of magnitude to see the signal,” says Wang.

The researchers zoomed in on the signals and observed a peak at a specific mass, indicating the presence of X (3872) particles, about 100 in all.

“It’s almost unthinkable that we can tease out these 100 particles from this huge dataset,” says Lee, who along with Wang ran multiple checks to verify their observation.

“Every night I would ask myself, is this really a signal or not?” Wang recalls. “And in the end, the data said yes!”

In the next year or two, the researchers plan to gather much more data, which should help to elucidate the X particle’s structure. If the particle is a tightly bound tetraquark, it should decay more slowly than if it were a loosely bound molecule. Now that the team has shown X particles can be detected in quark-gluon plasma, they plan to probe this particle with quark-gluon plasma in more detail, to pin down the X particle’s structure.

“Currently our data is consistent with both because we don’t have a enough statistics yet. In next few years we’ll take much more data so we can separate these two scenarios,” Lee says. “That will broaden our view of the kinds of particles that were produced abundantly in the early universe.”

Physics World reporter Tim Wogan writes that MIT researchers used machine learning techniques to identify a mysterious “X” particle in the quark–gluon plasma produced by the Large Hadron Collider. “Further studies of the particle could help explain how familiar hadrons such as protons and neutrons formed from the quark–gluon plasma believed to have been present in the early universe,” writes Wogan.

Using machine learning techniques, MIT researchers have detected “X particles” produced by the Large Hadron Collider, reports Rahul Rao for Popular Science. “The results tell us more about an artifact from the very earliest ticks of history, writes Rao. “Quark-gluon plasma filled the universe in the first millionths of a second of its life, before what we recognize as matter—molecules, atoms, or even protons or neutrons—had formed.”

Scientists have discovered “X-particles” in the aftermath of collisions produced in the Large Hadron Collider, which could shed light on the structure of these elusive particles, reports Becky Ferreira for Vice. “X particles can yield broader insights about the type of environment that existed in those searing and turbulent moments after the Big Bang,” writes Ferreira.