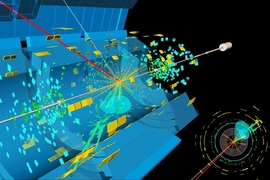 ↓ Download Image
Caption: A candidate event display for the production of a Higgs boson decaying to two b-quarks (blue cones), in association with a W boson decaying to a muon (red) and a neutrino. The neutrino leaves the detector unseen, and is reconstructed through the missing transverse energy (dashed line).
Credits: Image: ATLAS Collaboration/CERN

Caption:
A candidate event display for the production of a Higgs boson decaying to two b-quarks (blue cones), in association with a W boson decaying to a muon (red) and a neutrino. The neutrino leaves the detector unseen, and is reconstructed through the missing transverse energy (dashed line).
Credits:
Image: ATLAS Collaboration/CERN

Today, scientists at CERN, the European Organization for Nuclear Research, have announced that, for the first time, they have observed the Higgs boson transforming into elementary particles known as bottom quarks as it decays. Physicists have predicted this to be the most common way in which most Higgs bosons should decay, but until now, it has been extremely difficult to pick out the decay’s subtle signals. The discovery is a significant step towards understanding how the Higgs boson gives mass to all the fundamental particles in the universe.

The scientists made their discovery using the ATLAS and the CMS detectors, two major experiments designed to analyze the high-energy particle collisions generated by CERN’s Large Hadron Collider (LHC) — the largest, most powerful particle accelerator in the world.

Higgs bosons, which were first discovered in 2012, are an incredible rarity, and are produced in just one out of every billion LHC collisions. Once smashed into existence, the particles vanish almost immediately, decaying into a stream of secondary particles. The Standard Model of physics, which is the most widely accepted theory for describing the interactions of most particles in the universe, predicts that nearly 60 percent of Higgs bosons should decay to bottom quarks, elementary particles that are about four times as massive as a proton.

Both the ATLAS and CMS teams spent several years refining techniques and incorporating more data in their hunt for this most common Higgs boson decay. Both experiments ultimately confirmed that, for the first time, they saw evidence of a Higgs boson decaying to a bottom quark, with a statistically high degree of confidence.

MIT physicists in the Laboratory for Nuclear Science have been involved in analyzing and interpreting data for this new discovery, including Philip Harris, assistant professor of physics. MIT News spoke with Harris, who is also a member of the CMS experiment, about the mind-bending search for a vanishing transformation, and how the new Higgs discovery may help physicists to understand why the universe has mass.

Q: Put this discovery in context for us a bit. How significant is it that your team has observed the Higgs boson decaying to bottom quarks?

A: The Higgs boson has two distinct mechanisms: It gives mass to the force particles involved in electroweak interactions, the force responsible for nuclear beta decay; and it gives mass to the fundamental particles inside the atom, the quarks and the leptons (such as electrons and muons). Despite the fact that it is responsible for both mechanisms, the Higgs discovery and the subsequent Higgs property measurements have largely been performed with the electroweak force particles. We have only recently directly observed Higgs interactions with matter. This measurement, the Higgs boson decaying to a bottom quark, is the first time we have directly observed Higgs-to-quark interactions. This confirms that quarks do indeed get mass from the Higgs mechanism.

Q: How tricky was this detection to make, and how was it finally observed?

A: Roughly 60 percent of all Higgs decays are to bottom quarks. This is the largest single decay channel of the Higgs boson. However, it is also the channel that has the largest background [noise from surrounding particles]. Depending on how you count it, it’s about a million times larger than the channels we used to discover the Higgs boson.

People like to compare Higgs measurements with finding a needle in a haystack. Here, I think that a more apt analogy is a magic-eye stereogram. You are looking for a broad distortion in the data that is very difficult to see. The trick of trying to see this distortion is like a magic eye: You have to figure out how to focus right.

To calibrate our “focus,” we looked at the electroweak force particle, the Z boson, and its decay to bottom quarks. Once we were able to see the Z boson going into bottom quarks, we set our target to the Higgs boson, and there it was. I should stress that to see this distortion clearly we had to rely on technology that was at its infancy at the time of the Higgs boson discovery, including some of the most recent advancements in machine learning. In fact, only a few years ago it was taught in your standard particle physics class that it was impossible to observe the Higgs decays in some of these channels.

One of the best ways to test our view is by measuring the properties of the Higgs boson. The Higgs-to-bottom-quark decay is essential to this understanding because it allows us to directly probe the properties of Higgs and quark matter interactions and because of its large decay rate, which means we can measure the Higgs boson in all sorts of scenarios that are not possible with other decay modes.

This observation gives us a new and powerful tool to probe the Higgs boson. In fact, as part of this measurement, we were able to measure Higgs bosons with energies over twice the energy of the highest Higgs bosons previously observed.