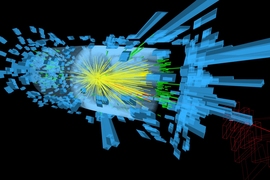 ↓ Download Image
Caption: Particles created from the proton collision stream out from the center of the Compact Muon Solenoid detector. They are first detected by the Silicon Tracker, whose data can be used to reconstruct the particle trajectories, indicated by yellow lines. An Electromagnetic Calorimeter detects energy deposited by electrons and photons, indicated by green boxes. The energy detected by the Hadronic Calorimeter, the primary component of jets, is indicated by blue boxes. Particles reaching the outermost parts of the detector are indicated in red.
Credits: Image: CERN

Caption:
Particles created from the proton collision stream out from the center of the Compact Muon Solenoid detector. They are first detected by the Silicon Tracker, whose data can be used to reconstruct the particle trajectories, indicated by yellow lines. An Electromagnetic Calorimeter detects energy deposited by electrons and photons, indicated by green boxes. The energy detected by the Hadronic Calorimeter, the primary component of jets, is indicated by blue boxes. Particles reaching the outermost parts of the detector are indicated in red.
Credits:
Image: CERN

After a two-year hiatus, the Large Hadron Collider, the largest and most powerful particle accelerator in the world, began its second run of experiments in June, smashing together subatomic particles at 13 teraelectronvolts (TeV) — the highest energy ever achieved in a laboratory. Physicists hope that such high-energy collisions may produce completely new particles, and potentially simulate the conditions that were seen in the early universe.

In a paper to appear in the journal Physics Letters B, the Compact Muon Solenoid (CMS) collaboration at the European Organization for Nuclear Research (CERN) reports on the run’s very first particle collisions, and describes what an average collision between two protons looks like at 13 TeV. One of the study leaders is MIT assistant professor of physics Yen-Jie Lee, who leads MIT’s Relativistic Heavy Ion Group, together with physics professors Gunther Roland and Bolek Wyslouch.

In the experimental run, researchers sent two proton beams hurtling in opposite directions around the collider at close to the speed of light. Each beam contained 476 bunches of 100 billion protons, with collisions between protons occurring every 50 nanoseconds. The team analyzed 20 million “snapshots” of the interacting proton beams, and identified 150,000 events containing proton-proton collisions.

For each collision that the researchers identified, they determined the number and angle of particles scattered from the colliding protons. The average proton collision produced about 22 charged particles known as hadrons, which were mainly scattered along the transverse plane, immediately around the main collision point.

Compared with the collider’s first run, at an energy intensity of 7 TeV, the recent experiment at 13 TeV produced 30 percent more particles per collision.

Lee says the results support the theory that higher-energy collisions may increase the chance of finding new particles. The results also provide a precise picture of a typical proton collision — a picture that may help scientists sift through average events looking for atypical particles.

“At this high intensity, we will observe hundreds of millions of collisions each second,” Lee says. “But the problem is, almost all of these collisions are typical background events. You really need to understand the background well, so you can separate it from the signals for new physics effects. Now we’ve prepared ourselves for the potential discovery of new particles.”

Shrinking the uncertainty of tiny collisions

Normally, 13 TeV is not a large amount of energy — about that expended by a flying mosquito. But when that energy is packed into a single proton, less than a trillionth the size of a mosquito, that particle’s energy density becomes enormous. When two such energy-packed protons smash into each other, they can knock off constituents from each proton — either quarks or gluons — that may, in turn, interact to produce entirely new particles.

Predicting the number of particles produced by a proton collision could help scientists determine the probability of detecting a new particle. However, existing models generate predictions with an uncertainty of 30 to 40 percent. That means that for high-energy collisions that produce a large number of particles, the uncertainty of detecting rare particles can be a considerable problem.

“For high-luminosity runs, you might have up to 100 collisions, and the uncertainty of the background level, based on existing models, would be very big,” Lee says.

To shrink this uncertainty and more precisely count the number of particles produced in an average proton collision, Lee and his team used the Large Hadron Collider’s CMS detector. The detector is built around a massive magnet that can generate a field that’s 100,000 times stronger than the Earth’s magnetic field.

Typically, a magnetic field acts to bend charged particles that are produced by proton collisions. This bending allows scientists to measure a particle’s momentum. However, an average collision typically produces lightweight particles with very low momentum — particles that, in a magnetic field, end up coiling their way toward the main collider’s beam pipe, instead of bending toward the CMS detector.

To count these charged, lightweight particles, the scientists analyzed the data with the detector’s magnet off. While they couldn’t measure the particles’ momentum, they could precisely count the number of charged particles, and measure the angles at which they arrived at the detector. The measurements, Lee says, give a more accurate picture of an average proton collision, compared with existing theoretical models.

Knowing what a typical proton collision looks like will help scientists set the collider to essentially see through the background of average events, to more efficiently detect rare particles.

Lee says the new results may also have a significant impact on the study of the hot and dense medium from the early universe. In addition to proton collisions, scientists also plan to study the highest-energy collisions of lead ions, each of which contain 208 protons and neutrons. When accelerated in a collider, lead ions flatten into disks due to a force called the Lorentz contraction. When smashed together, lead ions can generate hundreds of interactions between protons and produce an extremely dense medium that is thought to mimic the conditions of space just after the Big Bang. In this way, the Large Hadron Collider experiment could potentially simulate the condition of the very first moments of the early universe.

“One microsecond after the Big Bang, the universe was very dense and hot — about 1 trillion degrees,” Lee says. “With lead ion collisions, we can reproduce the early universe in a ‘small bang.’ If we can understand what one proton collision looks like, we may be able to get some more insights about what will happen when hundreds of them occur at the same time. Then we can see what we can learn about the early universe.”