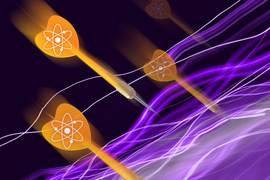 Caption:
Shooting beams of ions at proton clouds, like throwing nuclear darts at the speed of light, can provide a clearer view of nuclear structure.
Credits:
Image: Jose-Luis Olivares, MIT

Physicists at MIT and elsewhere are blasting beams of ions at clouds of protons —like throwing nuclear darts at the speed of light — to map the structure of an atom’s nucleus.

The experiment is an inversion of the usual particle accelerators, which hurl electrons at atomic nuclei to probe their structures. The team used this “inverse kinematics” approach to sift out the messy, quantum mechanical influences within a nucleus, to provide a clear view of a nucleus’ protons and neutrons, as well as its short-range correlated (SRC) pairs. These are pairs of protons or neutrons that briefly bind to form super-dense droplets of nuclear matter and that are thought to dominate the ultradense environments in neutron stars.

The results, published today in Nature Physics, demonstrate that inverse kinematics may be used to characterize the structure of more unstable nuclei — essential ingredients scientists can use to understand the dynamics of neutron stars and the processes by which they generate heavy elements.

“We’ve opened the door for studying SRC pairs, not only in stable nuclei but also in neutron-rich nuclei that are very abundant in environments like neutron star mergers,” says study co-author Or Hen, assistant professor of physics at MIT. “That gets us closer to understanding such exotic astrophysical phenomena.”

Hen’s co-authors include Jullian Kahlbow and Efrain Segarra of MIT, Eli Piasetzky of Tel-Aviv University, and researchers from Technical University of Darmstadt, the Joint Institute for Nuclear Research (JINR) in Russia, the French Alternative Energies and Atomic Energy Commission (CEA), and the GSI Helmholtz Center for Heavy Ion Research in Germany.

Particle accelerators typically probe nuclear structures through electron scattering, in which high-energy electrons are beamed at a stationary cloud of target nuclei. When an electron hits a nucleus, it knocks out protons and neutrons, and the electron loses energy in the process. Researchers measure the energy of the electron beam before and after this interaction to calculate the original energies of the protons and neutrons that were kicked away.

While electron scattering is a precise way to reconstruct a nucleus’ structure, it is also a game of chance. The probability that an electron will hit a nucleus is relatively low, given that a single electron is vanishingly small in comparison to an entire nucleus. To increase this probability, beams are loaded with ever-higher electron densities.

Scientists also use beams of protons instead of electrons to probe nuclei, as protons are comparably larger and more likely to hit their target. But protons are also more complex, and made of quarks and gluons, the interactions of which can muddy the final interpretation of the nucleus itself.

To get a clearer picture, physicists in recent years have inverted the traditional setup: By aiming a beam of nuclei, or ions, at a target of protons, scientists can not only directly measure the knocked out protons and neutrons, but also compare the original nucleus with the residual nucleus, or nuclear fragment, after it has interacted with a target proton.

“With inverted kinematics, we know exactly what happens to a nucleus when we remove its protons and neutrons,” Hen says.

The team took this inverted kinematics approach to ultrahigh energies, using JINR’s particle accelerator facility to target a stationary cloud of protons with a beam of carbon-12 nuclei, which they shot out at 48 billion electron-volts — orders of magnitude higher than the energies found naturally in nuclei.

At such high energies, any nucleon that interacts with a proton will stand out in the data, compared with noninteracting nucleons that pass through at much lower energies. In this way, the researchers can quickly isolate any interactions that did occur between a nucleus and a proton.

From these interactions, the team picked through the residual nuclear fragments, looking for boron-11 — a configuration of carbon-12, minus a single proton. If a nucleus started out as carbon-12 and wound up as boron-11, it could only mean that it encountered a target proton in a way that knocked out a single proton. If the target proton knocked out more than one proton, it would have been the result of quantum mechanical effects within the nucleus that would be difficult to interpret. The team isolated boron-11 as a clear signature and discarded any lighter, quantumly influenced fragments.

The team calculated the energy of the proton knocked out of the original carbon-12 nucleus, based on each interaction that produced boron-11. When they set the energies into a graph, the pattern fit exactly with carbon-12’s well-established distribution — a validation of the inverted, high-energy approach.

They then turned the technique on short-range correlated pairs, looking to see if they could reconstruct the respective energies of each particle in a pair —  fundamental information for ultimately understanding the dynamics in neutron stars and other neutron-dense objects.

They repeated the experiment and this time looked for boron-10, a configuration of carbon-12, minus a proton and a neutron. Any detection of boron-10 would mean that a carbon-12 nucleus interacted with a target proton, which knocked out a proton, and its bound partner, a neutron. The scientists could measure the energies of both the target and the knocked out protons to calculate the neutron’s energy and the energy of the original SRC pair.

In all, the researchers observed 20 SRC interactions and from them mapped carbon-12’s distribution of SRC energies, which fit well with previous experiments. The results suggest that inverse kinematics can be used to characterize SRC pairs in more unstable and even radioactive nuclei with many more neutrons.

“When everything is inverted, this means a beam driving through could be made of unstable particles with very short lifetimes that live for a millisecond,” says Julian Kahlbow, a joint postdoc at MIT and Tel-aviv University and a co-leading author of the paper. “That millisecond is enough for us to create it, let it interact, and let it go. So now we can systematically add more neutrons to the system and see how these SRCs evolve, which will help us inform what happens in neutron stars, which have many more neutrons than anything else in the universe.”

No matter the size of a nuclear party, some protons and neutrons will always pair up and dance