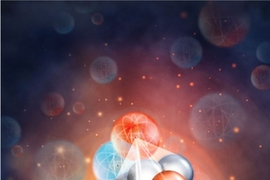 MIT physicists now have an answer to a question in nuclear physics that has puzzled scientists for three decades: Why do quarks move more slowly inside larger atoms?

Quarks, along with gluons, are the fundamental building blocks of the universe. These subatomic particles — the smallest particles we know of — are far smaller, and operate at much higher energy levels, than the protons and neutrons in which they are found. Physicists have therefore assumed that a quark should be blithely indifferent to the characteristics of the protons and neutrons, and the overall atom, in which it resides.

But in 1983, physicists at CERN, as part of the European Muon Collaboration (EMC), observed for the first time what would become known as the EMC effect: In the nucleus of an iron atom containing many protons and neutrons, quarks move significantly more slowly than quarks in deuterium, which contains a single proton and neutron. Since then, physicists have found more evidence that the larger an atom’s nucleus, the slower the quarks that move within.

“People have been wracking their brains for 35 years, trying to explain why this effect happens,” says Or Hen, assistant professor of physics at MIT.

Now Hen, Barak Schmookler, and Axel Schmidt, a graduate student and postdoc in MIT’s Laboratory for Nuclear Science, have led an international team of physicists in identifying an explanation for the EMC effect. They have found that a quark’s speed depends on the number of protons and neutrons forming short-ranged correlated pairs in an atom’s nucleus. The more such pairs there are in a nucleus, the more slowly the quarks move within the atom’s protons and neutrons.

Schmidt says an atom’s protons and neutrons can pair up constantly, but only momentarily, before splitting apart and going their separate ways. During this brief, high-energy interaction, he believes that quarks in their respective particles may have a “larger space to play.”

“In quantum mechanics, anytime you increase the volume over which an object is confined, it slows down,” Schmidt says. “If you tighten up the space, it speeds up. That’s a known fact.”

As atoms with larger nuclei intrinsically have more protons and neutrons, they also are more likely to have a higher number of proton-neutron pairs, also known as “short-range correlated” or SRC pairs. Therefore, the team concludes that the larger the atom, the more pairs it is likely to contain, resulting in slower-moving quarks in that particular atom.

Schmookler, Schmidt, and Hen as members of the CLAS Collaboration at the Thomas Jefferson National Accelerator Facility, have published their results today in the journal Nature.

From a suggestion to a full picture

In 2011, Hen and collaborators, who has focused much of their research on SRC pairs, wondered whether this ephemeral coupling had anything to do with the EMC effect and the speed of quarks in atomic nuclei.

They gathered data from various particle accelerator experiments, some of which measured the behavior of quarks in certain atomic nuclei, while others detected SRC pairs in other nuclei. When they plotted the data on a graph a clear trend appeared: The larger an atom’s nucleus, the more SRC pairs there were, and the slower the quarks that were measured. The largest nucleus in the data — gold — contained quarks that moved 20 percent more slowly than those in the smallest measured nucleus, helium.

“This was the first time this connection was concretely suggested,” Hen says. “But we had to do a more detailed study to build a whole physical picture.”

So he and his colleagues analyzed data from an experiment that compared atoms of different sizes and allowed measuring both the quarks’ speed and the number of SRC pairs in each atom’s nucleus. The experiment was carried out at the CEBAF Large Acceptance Spectrometer, or CLAS detector, an enormous, four-story spherical particle accelerator at the Thomas Jefferson National Laboratory in Newport News, Virginia.

Within the detector, Hen describes the team’s target setup as a “kind of a Frankenstein-ish thing,” with mechanical arms, each holding a thin foil made from a different material, such as carbon, aluminum, iron, and lead, each made from atoms containing 12, 27, 67, and 208 protons and neutrons, respectively. An adjacent vessel held liquid deuterium, with atoms containing the lowest number of protons and neutrons of the group.

When they wanted to study a particular foil, they sent a command to the relevant arm to lower the foil of interest, following the deuterium cell and directly in the path of the detector’s electron beam. This beam shot electrons at the deuterium cell and solid foil, at the rate of several billion electrons per second. While a vast majority of electrons miss the targets, some do hit either the protons or neutrons inside the nucleus, or the much tinier quarks themselves. When they hit, the electrons scatter widely, and the angles and energies at which they scatter vary depending on what they hit — information that the detector captures.

The experiment ran for several months and in the end amassed billions of interactions between electrons and quarks. The researchers calculated the speed of the quark in each interaction, based on the electron’s energy after it scattered, then compared the average quark speed between the various atoms.

By looking at much smaller scaterring angles, corresponding to momentum transfers of a different wave length, the team were able to “zoom out” so that electrons would scatter off the larger protons and neutrons, rather than quarks. SRC pairs are typically extremely energetic and would therefore scatter electrons at higher energies than unpaired protons and neutrons, which is a distinction the researchers used to detect SRC pairs in each material they studied.

“We see that these high-momentum pairs are the reason for these slow-moving quarks,” Hen says.

In particular, they found that the quarks in foils with larger atomic nuclei (and more proton-neutron pairs) moved at most 20 percent slower than deuterium, the material with the least number of pairs.

“These pairs of protons and neutrons have this crazy high-energy interaction, very quickly, and then dissipate,” Schmidt says. “In that time, the interaction is much stronger than normal and the nucleons have significant spatial overlap. So we think quarks in this state slow down a lot.”

Their data show for the first time that how much a quark’s speed is slowed depends on the number of SRC pairs in an atomic nucleus. Quarks in lead, for instance, were far slower than those in aluminum, which themselves were slower than iron, and so on.

The team is now designing an experiment in which they hope to detect the speed of quarks, specifically in SRC pairs.

“We want to isolate and measure correlated pairs, and we expect that will yield this same universal function, in that the way quarks change their velocity inside pairs is the same in carbon and lead, and should be universal across nuclei,” Schmidt says.

Ultimately, the team’s new explanation can help to illuminate subtle yet important differences in the behavior of quarks, the most basic building blocks of the visible world. Scientists have an incomplete understanding of how these tiny particles come to build the protons and neutrons that then come together to form the individual atoms that make up all the material we see in the universe.

“Understanding how quarks interact is really the essence of understanding the visible matter in the universe,” Hen says. “This EMC effect, even though 10 to 20 percent, is something so fundamental that we want to understand it.”

This research was funded, in part, by the U.S. Department of Energy, and the National Science Foundation.