No matter the size of a nuclear party, some protons and neutrons will always pair up and dance 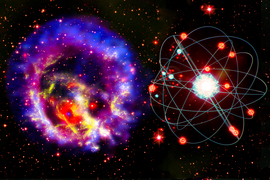 ↓ Download Image
Caption: An MIT-led team simulated the behavior of protons and neutrons in several types of atomic nuclei, finding that the formulas describing how atoms behave in a gas can be generalized to predict how protons and neutrons interact at close range in the nucleus.
Credits: Credit: Collage by MIT News. Neutron star image: X-ray (NASA/CXC/ESO/F.Vogt et al); Optical (ESO/VLT/MUSE & NASA/STScI)

Caption:
An MIT-led team simulated the behavior of protons and neutrons in several types of atomic nuclei, finding that the formulas describing how atoms behave in a gas can be generalized to predict how protons and neutrons interact at close range in the nucleus.
Credits:
Credit: Collage by MIT News. Neutron star image: X-ray (NASA/CXC/ESO/F.Vogt et al); Optical (ESO/VLT/MUSE & NASA/STScI)

Atoms in a gas can seem like partiers at a nanoscopic rave, with particles zipping around, pairing up, and flying off again in seemingly random fashion. And yet physicists have come up with formulas that predict this behavior, even when the atoms are extremely close together and can tug and pull on each other in complicated ways.

The environment within the nucleus of a single atom seems similar, with protons and neutrons also dancing about. But because the nucleus is such a compact space, scientists have struggled to pin down the behavior of these particles, known as nucleons, in an atom’s nucleus. Models that describe the interactions of nucleons that are far apart break down when the particles pair up and interact at close range.

Now an MIT-led team has simulated the behavior of protons and neutrons in several types of atomic nuclei, using some of the most powerful supercomputers in the world. The team explored a wide range of nuclear interaction models and found, surprisingly, that the formulas describing how atoms behave in a gas can be generalized to predict how protons and neutrons interact at close range in the nucleus.

When nucleons are less than 1 femtometer — 1 quadrillionth of a meter — apart, the researchers found another surprise: The particles pair up in the same way, regardless of whether they inhabit a small nucleus like helium or a more crowded one like calcium.

“These short-range pairs don’t really care about their environment — whether they’re in a huge party or a party of five, it doesn’t matter — they will pair up in the same universal way,” says Reynier Cruz-Torres, who co-led the work as a physics graduate student at MIT.

This short-range behavior is likely universal for all types of atomic nuclei, such as the much denser, complicated nuclei in radioactive atoms.

“People did not expect this type of model would capture nuclei, which are some of the most complicated objects in physics,” says Or Hen, assistant professor of physics at MIT. “Despite a more than 20 orders of magnitude difference in density between an atom and nucleus, we can still find this universal behavior and apply it to many open problems in nuclear physics.”

The team has published their results today in the journal Nature Physics. MIT co-authors include Axel Schmidt, a research affiliate in the Laboratory for Nuclear Science, along with collaborators from the Hebrew University, Los Alamos and Argonne National Laboratories, and various other institutions.

Hen seeks to understand the messy interactions between protons and neutrons at extremely short range, where the pull and tug between nucleons in the very small, dense environment of the nucleus has been notoriously difficult to pin down. For years, he has wondered whether a concept in atomic physics known as contact formalism could also apply to nuclear physics and the inner workings of the nucleus.

Very broadly, contact formalism is a general mathematical description that proves the behavior of atoms in a cloud depends on their scale: Those that are far from each other follow a certain physics, while atoms very close together follow an entirely separate set of physics. Each group of atoms goes about their interactions oblivious to the behavior of the other group. According to contact formalism, for instance, there will always be a certain number of ultraclose pairs, regardless of what other, more distant atoms are doing in the cloud.

“I thought that it cannot be that you see this beautiful formalism, that has been a revolution in atomic physics, and yet we can’t make it work for nuclear physics,” Hen says. “It was just too much of a connection.”

The researchers first teamed with Ronen Weiss and Nir Barnea at Hebrew University, who led the development of a theoretical generalization of atomic contact formalism, to describe a general system of interacting particles. They then looked to simulate particles in a small, dense, nuclear environment, to see whether patterns of behavior would emerge among short-range nucleons, in an entirely separate way from that of long-range nucleons as predicted by the generalized contact formalism.

The group simulated particle interactions within several light atomic nuclei, ranging from three nucleons in helium, to 40 in calcium. For each type of atomic nucleus, they ran a random sampling algorithm to generate a movie of where each of the protons and neutrons in a given nucleus might be over time.

“At a certain timeshot, these particles may be distributed one way, interacting among themselves with a given scheme, where this one pairs with that one, for instance, and a third particle gets kicked instead. Then, at another timeshot, they will be distributed differently,” explains co-lead author Diego Lonardoni, a physicist at Los Alamos National Laboratory and Michigan State University. “So we repeat these calculations again and again to reach equilibrium.”

To see any sort of equilibrium, or pattern, emerge, the team had to simulate all the possible physics between each and every particle, generating thousands of snapshots for each type of nucleus. To carry out this number of calculations normally would take millions of hours of processing time.

“It would take my laptop more than the age of the universe to finish the calculation,” Hen says. “If you distribute the calculation among 10,000 processors, you can get your result in a time on human scales.”

So the team used supercomputers at Los Alamos and at Argonne National Laboratory — some of the most powerful computers in the world — to distribute the work in parallel.

After running the simulations, they plotted a distribution of nucleons for each type of nucleus they simulated. For instance, for an oxygen nucleus, they found a certain percentage of nucleons within 1 fermi apart, and another percentage that were slightly closer, and so on.

Surprisingly, they found that, for long-range nucleons, the distribution varied widely from one type of nucleus to another. But for short-range nucleons that were less than 1 femtometer apart, the distributions across atomic types looked exactly the same, no matter if the nucleons inhabited an ultralight helium nucleus or a denser carbon nucleus. In other words, short-range nucleons behaved independently of their larger-scale environment, similar to how atomic behavior is described through contact formalism.

“Our finding offers a new and simple way to nail down the short-distance part of the nuclear distribution that, together with existing theory, allows essentially getting the full distribution,” Hen says. “With that, we can test the nature of the neutrino and calculate the cooling rates of neutron stars, among other open questions.”

This research was supported, in part, by the U.S. Department of Energy, the Pazy Foundation, the Israeli Science Foundation, and the Clore Foundation.