Merging storytelling and technology, “The Conquered” comes together in true MIT fashion 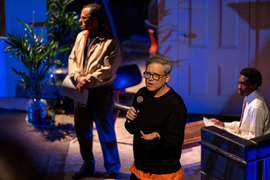 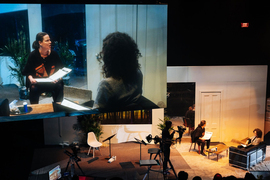 ↓ Download Image
Caption: Scheib, who served as director, made use of a huge screen to the left of stage that functioned similarly to a jumbotron at a sporting event, giving the audience a live, intimate look at the action on stage.
Credits: Photo: Caroline Alden Photography 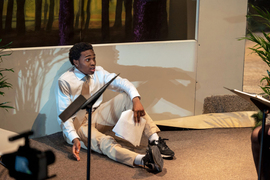 ↓ Download Image
Caption: The play was unique for not only the performance itself but also how it came together. The professors had little more than a rough idea for the show until about a week before it opened, leading — intentionally — to a final, whirlwind week in which the team worked on the piece’s technological and more traditional theatrical aspects together.
Credits: Photo: Caroline Alden Photography

Caption:
Scheib, who served as director, made use of a huge screen to the left of stage that functioned similarly to a jumbotron at a sporting event, giving the audience a live, intimate look at the action on stage.
Credits:
Photo: Caroline Alden Photography

Caption:
The play was unique for not only the performance itself but also how it came together. The professors had little more than a rough idea for the show until about a week before it opened, leading — intentionally — to a final, whirlwind week in which the team worked on the piece’s technological and more traditional theatrical aspects together.
Credits:
Photo: Caroline Alden Photography

It started with a childhood memory. Or maybe it was a dream. MIT Senior Lecturer Ken Urban couldn’t get the image of a face in a window out of his head.

Eventually he developed the vision into a rough idea for a plot. Last year, he shared an early treatment with Jay Scheib, MIT’s Class of 1949 Professor of Music and Theater Arts, and the two decided it would be the perfect opportunity for a long-discussed collaboration.

That kernel of an idea has come to life as a harrowing, suspenseful play titled “The Conquered,” performed Dec. 9 and 10 in the blackbox theater in MIT’s Theater Arts building.

The piece featured technical and storytelling aspects for which both professors are renown. Scheib, who served as director, made use of a huge screen to the left of stage that functioned similarly to a jumbotron at a sporting event, giving the audience an intimate look at the action on stage. Meanwhile the plot, created by the playwright Urban, included scenes of intense interpersonal struggle that have served as a hallmark of his writing career.

“It was a new way of working for me, having that much technology involved in the process, but I felt like it really helped to tell the story,” Urban says.

The play was unique for not only the performance but also how it came together. The professors had little more than a rough idea for the show until about a week before it opened, leading — intentionally — to a final, whirlwind week in which the team worked on the piece at a pace that resembled the move-fast-and-break things mantra of a startup.

In keeping with that approach, the weekend shows were dubbed “work in progress performances” that gave everyone a chance to see how the story lived on stage in front of an audience.

The performance also had a decidedly MIT feel because of the technological subject matter: Urban was partially inspired by stories he read about epileptic patients’ experience with brain implants.

“Being at MIT has got me interested in technology both as a subject matter and a form,” Urban says. “This project also comes from hearing the types of work my students are doing. … [Being on campus] has really opened my eyes to technology.”

In the play, Jane is a recently married middle-aged woman whose recurring nightmares prompt her to begin seeing a psychiatrist. She’s prescribed antidepressants, which stop the nightmares, but she can’t help shake the feeling that she’s being watched and something isn’t right.

Eventually Jane thinks she sees a man in her backyard, prompting her to stop taking her medication in an attempt to determine if her increasing paranoia is warranted.

The story is told through a series of intimate scenes between Jane and her husband, and Jane and her psychiatrist. Interspersed throughout are bouts of quick, hair-raising dialogue as Jane reads fragmented diary passages expressing her secret distress and self-doubt. An eerie score designed by Christian Frederickson, a technical instructor at MIT, made the audience feel Jane’s panic as she unravels the horrifying truth.

The play was performed on a stage designed to switch from Jane’s living room to her psychiatrist’s office. The huge screen showed a live feed from one of three cameras throughout the performance, zeroing in on characters and giving the impression of being in a movie theater.

The play came from a vision Urban had as a child of seeing a face in his second-floor bathroom window.

“It doesn’t make sense and can’t have actually happened, but that weird sense of the uncanny was something I was interested in writing about,” Urban says.

After stumbling onto stories about the epileptic patients with brain implants — who Urban says “felt as if someone was living in their brains”— he decided to merge the two concepts to write the story.

Scheib, who’s been at MIT since 2003, expressed interest in Urban’s idea, and the pair received a Fay Chandler Creativity Grant from MIT’s Center for Art, Science and Technology (CAST) last fall to develop the work.

This past summer, Urban went to MacDowell, an artist residency in the woods of Peterborough, New Hampshire, where he wrote a draft of the play in three sleepless days.

He shared the work with Scheib, who began considering staging and technology options, but the two professors didn’t really start to collaborate intensely until a week before the performance, a process Scheib compared to a startup deploying its first product.

“It’s like rapidly prototyping an idea and applying it to what is often a very slow process,” Scheib says. “We’re reversing the traditional American theater process in a sense. … I like to incorporate the technical aspects on day one, so it gives all aspects of production the opportunity to fire on the same piston.”

The play and the process behind it also served as a model for Urban and Scheib’s students to learn from.

“We’ve been able to treat the theater the same way you might use the labs on campus.” Scheib says.

Urban showed his playwriting class 21M.604J (Playwriting Fundamentals) an early treatment of the play and later a draft of the first scene. Students from 21M.711, Scheib’s live cinema performance course, worked with him on the set while he directed. Both professors invited students to rehearsals the week before the play and asked them to take notes at the showing to see how it all came together.

“A lot of the things we’re doing in this play are really an extension of what we do in our classes in some ways,” Scheib says.

Urban was changing and cutting scenes throughout the last week, including on the second day of the performance, when he rewrote three scenes and added a new scene.

“I know the story of the play and I know who these characters are, but I’m excited to see how, when they live in real space in this world we’re creating, that changes the story or amplifies different things,” Urban said before the show.

Scheib also got a new perspective while watching the actors rehearse and perform, and he says the play’s meaning has evolved for him as he’s helped bring Urban’s writing to life.

“You never know exactly what a piece will mean until you’ve put it under enough pressure that it reveals itself,” he says. “There’s an interesting theme in the piece I’m drawn to of forgetting. Forgetting usually has a negative connotation, but in this work, it has a really powerful allure — it just turns out it’s not as easy as it seems.”