How to clean solar panels without water 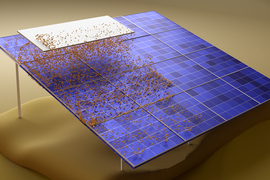 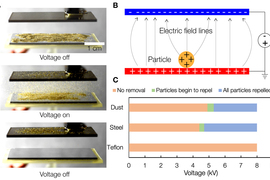 ↓ Download Image
Caption: The new system uses electrostatic repulsion to cause dust particles to detach and virtually leap off the panel’s surface, without the need for water or brushes.
Credits: Image: Courtesy of the researchers

Caption:
The new system uses electrostatic repulsion to cause dust particles to detach and virtually leap off the panel’s surface, without the need for water or brushes.
Credits:
Image: Courtesy of the researchers

Solar power is expected to reach 10 percent of global power generation by the year 2030, and much of that is likely to be located in desert areas, where sunlight is abundant. But the accumulation of dust on solar panels or mirrors is already a significant issue — it can reduce the output of photovoltaic panels by as much as 30 percent in just one month — so regular cleaning is essential for such installations.

But cleaning solar panels currently is estimated to use about 10 billion gallons of water per year — enough to supply drinking water for up to 2 million people. Attempts at waterless cleaning are labor intensive and tend to cause irreversible scratching of the surfaces, which also reduces efficiency. Now, a team of researchers at MIT has devised a way of automatically cleaning solar panels, or the mirrors of solar thermal plants, in a waterless, no-contact system that could significantly reduce the dust problem, they say.

The new system uses electrostatic repulsion to cause dust particles to detach and virtually leap off the panel’s surface, without the need for water or brushes. To activate the system, a simple electrode passes just above the solar panel’s surface, imparting an electrical charge to the dust particles, which are then repelled by a charge applied to the panel itself. The system can be operated automatically using a simple electric motor and guide rails along the side of the panel. The research is described today in the journal Science Advances, in a paper by MIT graduate student Sreedath Panat and professor of mechanical engineering Kripa Varanasi. 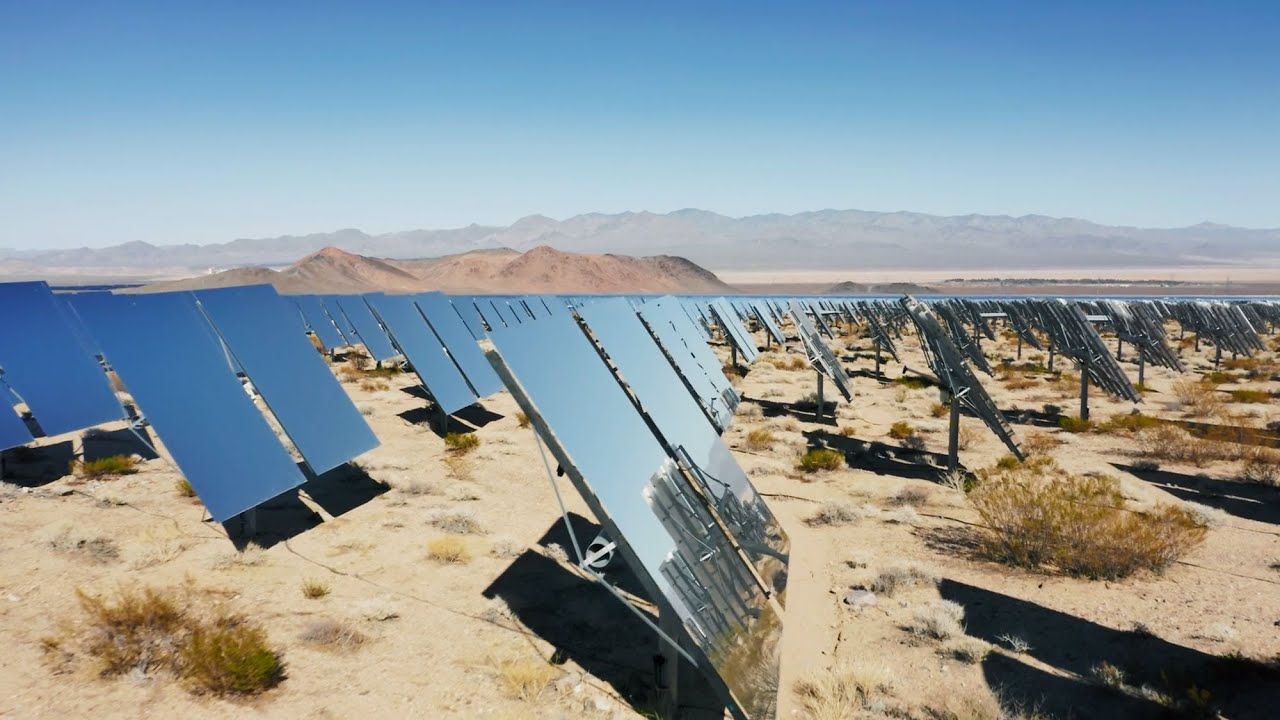 Despite concerted efforts worldwide to develop ever more efficient solar panels, Varanasi says, “a mundane problem like dust can actually put a serious dent in the whole thing.” Lab tests conducted by Panat and Varanasi showed that the dropoff of energy output from the panels happens steeply at the very beginning of the process of dust accumulation and can easily reach 30 percent reduction after just one month without cleaning. Even a 1 percent reduction in power, for a 150-megawatt solar installation, they calculated, could result in a $200,000 loss in annual revenue. The researchers say that globally, a 3 to 4 percent reduction in power output from solar plants would amount to a loss of between $3.3 billion and $5.5 billion.

“There is so much work going on in solar materials,” Varanasi says. “They’re pushing the boundaries, trying to gain a few percent here and there in improving the efficiency, and here you have something that can obliterate all of that right away.”

Many of the largest solar power installations in the world, including ones in China, India, the U.A.E., and the U.S., are located in desert regions. The water used for cleaning these solar panels using pressurized water jets has to be trucked in from a distance, and it has to be very pure to avoid leaving behind deposits on the surfaces. Dry scrubbing is sometimes used but is less effective at cleaning the surfaces and can cause permanent scratching that also reduces light transmission.

Water cleaning makes up about 10 percent of the operating costs of solar installations. The new system could potentially reduce these costs while improving the overall power output by allowing for more frequent automated cleanings, the researchers say.

“The water footprint of the solar industry is mind boggling,” Varanasi says, and it will be increasing as these installations continue to expand worldwide. “So, the industry has to be very careful and thoughtful about how to make this a sustainable solution.”

Other groups have tried to develop electrostatic based solutions, but these have relied on a layer called an electrodynamic screen, using interdigitated electrodes. These screens can have defects that allow moisture in and cause them to fail, Varanasi says. While they might be useful on a place like Mars, he says, where moisture is not an issue, even in desert environments on Earth this can be a serious problem.

The new system they developed only requires an electrode, which can be a simple metal bar, to pass over the panel, producing an electric field that imparts a charge to the dust particles as it goes. An opposite charge applied to a transparent conductive layer just a few nanometers thick deposited on the glass covering of the the solar panel then repels the particles, and by calculating the right voltage to apply, the researchers were able to find a voltage range sufficient to overcome the pull of gravity and adhesion forces, and cause the dust to lift away.

Using specially prepared laboratory samples of dust with a range of particle sizes, experiments proved that the process works effectively on a laboratory-scale test installation, Panat says. The tests showed that humidity in the air provided a thin coating of water on the particles, which turned out to be crucial to making the effect work. “We performed experiments at varying humidities from 5 percent to 95 percent,” Panat says. “As long as the ambient humidity is greater than 30 percent, you can remove almost all of the particles from the surface, but as humidity decreases, it becomes harder.”

Varanasi says that “the good news is that when you get to 30 percent humidity, most deserts actually fall in this regime.” And even those that are typically drier than that tend to have higher humidity in the early morning hours, leading to dew formation, so the cleaning could be timed accordingly.

“Moreover, unlike some of the prior work on electrodynamic screens, which actually do not work at high or even moderate humidity, our system can work at humidity even as high as 95 percent, indefinitely,” Panat says.

In practice, at scale, each solar panel could be fitted with railings on each side, with an electrode spanning across the panel. A small electric motor, perhaps using a tiny portion of the output from the panel itself, would drive a belt system to move the electrode from one end of the panel to the other, causing all the dust to fall away. The whole process could be automated or controlled remotely. Alternatively, thin strips of conductive transparent material could be permanently arranged above the panel, eliminating the need for moving parts.

By eliminating the dependency on trucked-in water, by eliminating the buildup of dust that can contain corrosive compounds, and by lowering the overall operational costs, such systems have the potential to significantly improve the overall efficiency and reliability of solar installations, Varanasi says.

The research was supported by Italian energy firm Eni. S.p.A. through the MIT Energy Initiative.

Mashable reporter Emmett Smith spotlights how MIT researchers have developed a new technique to clear dust from solar panels without using water. The new method uses “electrostatic repulsion, where an electrode that glides above the panel electrically charges dust particles and subsequently repels them.”

MIT engineers have developed a new contactless method to clean solar panels that could save billions of gallons of water, reports Anuradha Varanasi for Popular Science. “I was amazed at the sheer amount of pure water that is required for cleaning solar panels,” says Prof. Kripa Varanasi. “The water footprint of the solar industry is only going to grow in the future. We need to figure out how to make solar farms more sustainable.”

Prof. Kripa Varanasi, graduate student Sreedath Panath, and a team of researchers are developing a water-free way to clear dust off of solar panels, reports Billy Hurley and Ed Brown for Tech Briefs. “Water is such a precious commodity, and people need to be careful about how to make use of this resource that we have,” says Varanasi. “The solar industry really needs to keep this in mind; we don’t want to be solving one problem and creating another.”

MIT researchers have developed a new water-free system that uses static electricity to clear dust from solar panels, reports Miriam Fauzia for The Daily Beast. “By using this technique, we can recover up to 95 percent of a solar panel’s power output,” explains graduate student Sreedath Panat.

New Scientist reporter Chen Ly writes that MIT researchers have developed a new technique that uses static electricity to remove the dust from solar panels, which could save around 45 billion liters of water annually. “I think water is a precious commodity that is very undervalued,” says Prof. Kripa Varanasi. “What I’m hoping is this will spur more people to think about water issues.”

Why boiling droplets can race across hot oily surfaces

How to get salt out of water: Make it self-eject