How to weigh your options 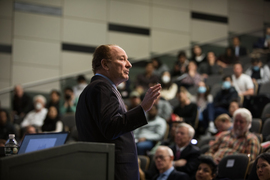 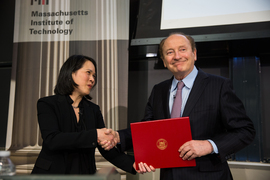 ↓ Download Image
Caption: Prior to Merton’s remarks, MIT faculty chair Lily Tsai introduced him, saying it was a “privilege to represent the MIT faculty in honoring you.”
Credits: Image: Jake Belcher 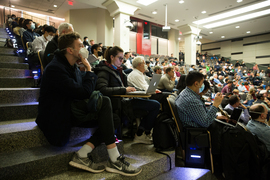 ↓ Download Image
Caption: The Killian Award was established in 1971; Killian served as MIT’s 10th president from 1948 to 1959 and served as chair of the MIT Corporation from 1959 to 1971. It is the highest such honor granted to faculty at MIT.
Credits: Image: Jake Belcher 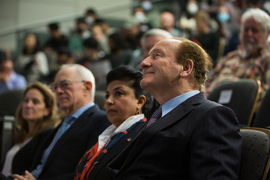 Caption:
Prior to Merton’s remarks, MIT faculty chair Lily Tsai introduced him, saying it was a “privilege to represent the MIT faculty in honoring you.”
Credits:
Image: Jake Belcher

Caption:
The Killian Award was established in 1971; Killian served as MIT’s 10th president from 1948 to 1959 and served as chair of the MIT Corporation from 1959 to 1971. It is the highest such honor granted to faculty at MIT.
Credits:
Image: Jake Belcher

The Black-Scholes-Merton model, the world’s most famous method of pricing stock options, emerged from MIT in the early 1970s. But as Robert C. Merton, one of its co-creators, explained in an annual Institute lecture on Monday, the real value of the method does not simply lie in understanding the value of stocks. It lies in understanding the components of almost any decision you might make.

Indeed, Merton listed a whole array of business issues that can be modeled along the lines of the famous stock-pricing model, including decisions about using fuel and energy, investing in drug discovery and R&D, adding manufacturing capacity, making bankruptcy decisions, and even financing movie sequels.

Time and again, we are faced with tradeoffs between flexibility, certainty, and cost. The question is whether people — investors, business leaders, or the rest of us, in our daily lives — are making those decisions systematically.

“You go into a bank, you get a bank deposit, you get deposit insurance,” said Merton, who is the School of Management Distinguished Professor of Finance at the MIT Sloan School of Management. “What is that? Well, if the bank doesn’t pay you, you can give your deposit to the government, and they’ll give you what they owe you. You get made whole. That’s a put option.”

Learning about options theory, in this vein, is a larger tool for making many choices more thoughtfully.

“What [understanding] options gets you to do, if you think about it, is really all about decision-making under uncertainty,” said Merton — who, along with Myron Scholes, won the 1997 Nobel Prize in economic sciences for his work on options modeling.

Grasping the “production process” of finance

Merton delivered his lecture, “Emergence of Financial Engineering from Financial Science — An MIT Story,” before a large audience in the Institute’s Huntington Hall, Room 10-250.

Prior to Merton’s remarks, MIT faculty chair Lily Tsai introduced him, saying it was a “privilege to represent the MIT faculty in honoring you.” Tsai added: “We recognize your role in the founding of modern finance theory and your skill in developing and applying innovative techniques to resolve areas of tremendous public interest and impact.”

Merton, for his part, called the award a “great and singular honor,” adding, “It’s humbling when I consider the past honorees who I now join.”

The Killian Award was established in 1971; Killian served as MIT’s 10th president from 1948 to 1959 and served as chair of the MIT Corporation from 1959 to 1971. It is the highest such honor granted to faculty at MIT.

Merton’s Killian Award citation, announced in 2021, lauded him as “one of the founding architects of modern finance theory,” whose research has “become an integral part of the global financial system.” The citation emphasized Merton’s “commitment to innovation through scientific research and to advancing pedagogy in financial economics, as well as to serving as a highly valued mentor to graduate students and junior colleagues.”

As its name suggests, the Black-Scholes-Merton theory was developed by economist Fischer Black, who joined MIT in the mid-1970s; Scholes, a professor at MIT in the early 1970s; and Merton, an MIT-trained economist and faculty member at the time too. Black died in 1995; Nobel Prizes are only awarded to living people.

Options are contracts used to buy or sell assets at set prices, and are often used to diversify or hedge a portfolio’s holdings. The Black-Scholes-Merton theory was quickly recognized as a breakthrough and remains widely deployed to determine valuations and risks regarding many financial instruments, including corporate debt and other liabilities, mortgages, and deposit, pension, and other financial insurance.

Much of Merton’s lecture on Monday linked the intellectual development of the Black-Scholes-Merton model in the early 1970s to the larger realization that the approach could be used to evaluate many kinds of transactions.

In Merton’s account, a key contribution of his own work on the model was thinking through the larger set of elements affecting options prices, such as risk-free access to capital. Due to the law of one price — the convergence of prices for similar assets — such factors would have to influence options pricing as well.

Serendipity in the ’70s

Merton also observed that the model’s popularity involved some “serendipity.” At the beginning of the 1970s, there was no large-scale market for options. Then, in 1973, the Chicago Board Options Exchange opened. By 2021, Merton noted, there were about 10 billion options traded in global markets.

That created a situation in which the modeling was being deployed in markets, which, as of the mid-1970s, were then generating data that could be studied to refine the theoretical side of finance.

“This work, Black, Scholes, was all done at MIT, nowhere else,” Merton recalled. “This was an exciting situation for the students and for the faculty, because not only did the science create practice, but practice fed back into the science, and there were just more problems to work on than you just knew what to do with. … This was a really, really, exciting period.”

As Merton noted in his talk, many people quickly realized the generalizability of the Black-Scholes-Merton model as well — including academics, investors, and the Nobel committee.

“When Myron and I shared the [Nobel] prize — and Fisher would have too if he hadn’t passed away — the citation was not for options,” Merton said. “It was for a new method to value derivatives. It recognized that this was a generalized approach.”

After receiving his BS in engineering mathematics from Columbia University and an MS in mathematics from Caltech, Merton earned his doctorate from MIT’s Department of Economics in 1970, where his principal adviser was the legendary economist Paul A. Samuelson.

In his remarks, Merton dedicated his lecture to Samuelson, who he called a “mentor, co-researcher, and friend,” adding: “I would not be standing here if it weren’t for him.”

After earning his PhD, Merton joined the finance faculty at MIT Sloan, where he became a full professor and served until 1988 as the J.C. Penney Professor of Management. Merton taught at the Harvard Business School from 1988 through 2010, before rejoining the MIT faculty.

Merton has devoted extensive time in recent years to working on retirement-finance issues, and he outlined some of his thoughts about those issue in Monday’s talk. Still, the bulk of his remarks focused on the foundations of options modeling and its wide applicability to the world.

Consider, Merton said, “Movie sequels. James Bond or something. Do you shoot it at the time when everybody’s there? Obviously that would be cheaper and more efficient. But then, if it’s a turkey and it doesn’t work, you’ve spent a lot of money shooting a lot of sequel that doesn’t have any value.”

In all, Merton added, “This goes to the core of making decisions under uncertainty. That’s what I want you to think [about]. And once you see it that way, the world is always going to look like options [in] everything.”