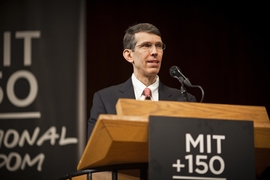 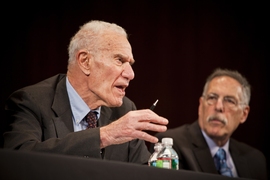 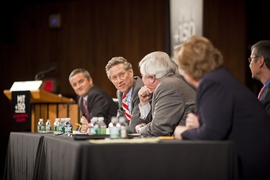 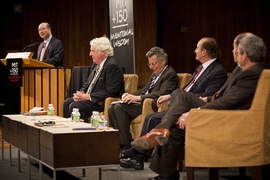 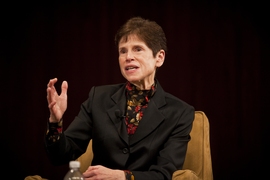 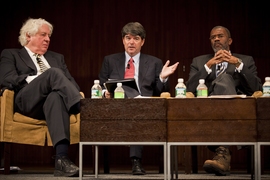 Caption:
James Poterba, MIT's Mitsui Professor of Economics and central organizer of the MIT 150th symposium on economics and finance, speaks during the first day of the two-day event.
Credits:
Photo: Dominick Reuter

Caption:
From left to right, Stewart C. Myers, Robert C. Merton (1970) Professor of Financial Economics, MIT Sloan School of Management; Douglas T. Breeden ’72, William W. Priest, Jr. Professor of Finance, Fuqua School of Business, Duke University; Eugene Flood PhD ’84, President and CEO, Smith Breeden Associates.
Credits:
Photo: Dominick Reuter
A recovery from recession is under way, but the uncertain state of the global economy and of the economics profession were major themes discussed during a special symposium at MIT on Thursday and Friday. An array of stars in economics and finance, including seven Nobel Prize winners, prominent policymakers and influential public intellectuals, convened to honor the Institute’s influential economics program, with the event acting as both an Institute family reunion and a debate forum.

The event, “Economics and Finance: from Theory to Practice to Policy” — one of six academic symposia taking place as part of MIT’s 150th anniversary — celebrated the program that gave economics scientific credibility, a legacy dating to the late Paul Samuelson in the 1940s. Since then, MIT economics has emphasized sophisticated methods more than a governing ideology; its scholars have developed influential macroeconomic models, “natural experiments” using already-existing data to replicate lab studies, randomized field experiments in development economics and many other advances.

“Paul Samuelson said MIT was the logical place for that kind of economics to flourish,” said James Poterba, the Mitsui Professor of Economics at MIT and the symposium’s central organizer, during his remarks on Thursday. Yet as Poterba also noted, “The last two years have not been a good time for the public view of economics and economists.”

Not ‘getting the right answers’

“Economics is not systematically getting the right answers,” said Akerlof, adding that most of his colleagues had failed by not predicting the recent economic crisis. But others quickly disagreed. “The real test of our performance as a profession is not our forecasting, but rather, are we doing a good job of understanding what happened?” said Robert Hall PhD ’67, a macroeconomist at Stanford.

Greg Mankiw PhD ’84, a professor at Harvard, said the state of the profession reminded him of Albert Camus’ story The Myth of Sisyphus, in which Sisyphus repeatedly pushes a rock to the top of a hill, only to watch it roll down. “Camus was addressing the question of how you live your life when you must acknowledge that life has no meaning,” said Mankiw. “I’ve come to think of that book lately, as a macroeconomist.”

Nonetheless, Mankiw added, “What Camus admired about Sisyphus is that he kept doing it with all the energy that he had … Over the past few years, the rock has now rolled back to the bottom of this hill, and we’re starting to try to push it up again.”

The impact of academic economics was still in the air during Friday’s sessions on finance. Several participating scholars developed valuation tools implicated in the financial crisis; they largely blamed the financial freeze-up on blundering bankers.

“Why did senior executives at banks never seem to read their accounting statements?” asked Myron Scholes, a former professor at the MIT Sloan School of Management and a co-creator of the ubiquitous Black-Scholes model, used throughout the investing world to value options.

Whatever their struggles, economists have hardly stopped forecasting, and some see better times ahead.

“The headline is that the global recovery continues,” said Olivier Blanchard PhD ’77, the Class of 1941 Professor of Economics at MIT and the current chief economist of the International Monetary Fund, noting that the IMF forecasts global growth of 4.5 percent in 2011. However, added Blanchard, there is a “two-speed recovery” occurring, with emerging countries expected to grow more quickly, at a rate of 6.5 percent in 2011, than developed nations.

That means the United States is likely to see only a gradual path to recovery. Moreover, as many speakers noted, of the two traditional economic levers used by government, fiscal policy — more government spending — faces political roadblocks at the moment, while monetary policy, largely consisting of the Federal Reserve’s control over interest rates, is currently hampered because those rates are near zero percent.

Indeed, the federal government has reached a “state of paralysis,” asserted Paul Krugman PhD ’77, the 2008 Nobelist in economics, now at Princeton. The economic stimulus bill of early 2009 has fallen “radically short” of the size needed to fully revive the economy, Krugman added, joining his panel by phone after a winter storm on Thursday affected his travel plans.

But Christina Romer PhD ’85, who just finished a two-year term as the chair of President Barack Obama’s Council of Economic Advisors, defended the White House’s actions, even as she conceded that a larger injection of government spending would have been more effective.

“It’s well known I would have liked a bigger recovery act,” said Romer, referring to the stimulus bill; she reportedly suggested it should be $1.2 trillion in size, rather than the $787 billion it became. On the other hand, Romer added, “I feel the actions of the last two years have been incredibly effective and played a role in the recovery we’re seeing.”

Fed: up with inflation?

Several symposium participants discussed the options now available to Federal Reserve chairman Ben Bernanke PhD ’79, including targeting a higher acceptable level of inflation, which is currently at a historically low 1 percent. As Hall pointed out, inflation, while largely unpopular, has an economic benefit: It encourages immediate spending, and thus growth, since money will be worth less in the future.

“Ben Bernanke would surrender his MIT PhD in economics if we could have 3 percent inflation today,” suggested Hall. On the other hand, noted Mankiw, the political dangers make such a move unlikely: “If Ben Bernanke said he was going to target an inflation rate of 5 percent rather than 2 percent, he would soon be former chairman Ben Bernanke.”

2010 Nobel Prize winner Peter Diamond PhD ’63, Institute Professor at MIT, whose nomination to serve on the Federal Reserve’s Board of Governors has been stalled for months in the U.S. Senate, added that quantitative easing — the Fed’s recent purchase of bonds to keep long-term interest rates low — is “a step in the right direction, but it isn’t as powerful as the ability to lower interest rates by 2, 3 or 4 percent.” Of his nomination ordeal, jokes Diamond, “I think I should be in the Guinness Book of World Records.”

Juxtaposing different generations of MIT economists, one Thursday panel included Robert Solow, the 1987 Nobel winner, who has been at MIT for more than 60 years; Diamond, who recalled attending MIT’s 100th anniversary celebrations as a graduate student; and Daron Acemoglu and Esther Duflo PhD ’99, who have both recently won the John Bates Clark Medal, given to the nation’s best economist under age 40.

Solow noted that he began studying macroeconomics — the study of the economy at large scales — before the word was coined. Duflo outlined her position that large-scale conclusions about the value of anti-poverty aid in developing countries are generally futile, and bog down along political lines. Instead, she asserted, it is preferable to test aid programs to see which ones work, the goal of MIT’s Abdul Latif Jameel Poverty Action Lab, which she co-founded in 2003.

“It seems strange that this argument is dominated by ideology, because we can resolve it” empirically, Duflo said.

Friday’s events constituted a reunion among leading financial economists, many of whom taught at MIT Sloan in the 1960s and 1970s. One panel included both Scholes and Robert C. Merton PhD ’70, who helped develop the Black-Scholes model. MIT Sloan had a “wonderful band of scholars,” said Scholes.

Merton, the School of Management Distinguished Professor of Finance at MIT Sloan, recalled that MIT was the only graduate program in economics to accept him, out of nine. “So you can see that was a really tough decision,” Merton quipped. Before long, though, he was a star student of Paul Samuelson. And as bad as the economy has been recently, Merton contended, some aspects of it were worse in the 1970s, given the oil crisis and stagflation.

“The good part was that it stimulated a great deal of research,” said Merton. Perhaps the recent downturn will have the same effect. Still, as Poterba noted on Thursday, observing the recent recession only “underscores the social return of getting the policies right.”

Algorithms designed to ensure multiple users share a network fairly can’t prevent some users from hogging all the bandwidth.