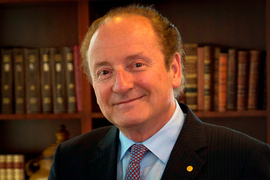 Acclaimed finance expert Robert C. Merton PhD ’70 has been named the recipient of MIT’s 2021-2022 James R. Killian Jr. Faculty Achievement Award, the highest honor the Institute faculty can confer upon one of its members.

The Killian Award citation hails Merton, the School of Management Distinguished Professor of Finance at the MIT Sloan School of Management, as “one of the founding architects of modern finance theory,” whose work has “become an integral part of the global financial system.”

The citation also notes Merton’s “profound commitment to innovation through scientific research and to advancing pedagogy in financial economics, as well as to serving as a highly valued mentor to graduate students and junior colleagues.” The award was announced at today’s Institute faculty meeting.

“I am deeply honored to have my work recognized by my remarkable and marvelously accomplished faculty colleagues who make MIT so special,” Merton said, upon receiving the award.

The Killian Award is the latest honor for Merton in a career full of distinctions. Merton won the Nobel Prize in Economic Sciences in 1997 (an honor shared with Myron Scholes) for his work in the 1970s developing an innovative model for pricing options in markets. Options are contracts used to buy or sell assets at set prices, and are often used to diversify or hedge a portfolio’s holdings.

The Black-Scholes-Merton theory of options pricing — also developed with economist Fischer Black — was recognized as a breakthrough at the time and became applied widely in finance. It remains heavily used today as a basic approach for determining valuations and risks around a wide array of financial instruments, including corporate debt and other liabilities, mortgages, and deposit, pension, and other financial insurance.

Beyond options pricing, Merton has examined a wide range of issues during his career, including retirement finance, optimal lifetime consumption and portfolio selection for investors, intertemporal asset pricing, credit risk, and loan guarantees. In recent years, his research has looked in depth at retirement finance solutions; tracking large-scale, systemic financial risks; and  financial innovation and the dynamics of change in financial institutions.

“He is also adept at developing scientific, non-partisan, and apolitical frameworks in which to apply theory to address critical challenges at the intersection of financial economics and public policy pertaining to sovereign risk management, financial regulation of systemic risk, personal retirement planning, and university endowment management,” the Killian Award citation states.

Merton received his BS in engineering mathematics from Columbia University, an MS in mathematics from Caltech, and his PhD from MIT’s Department of Economics in 1970, where his principal adviser was the distinguished economist Paul A. Samuelson.

After receiving his doctorate, Merton joined the finance faculty at MIT Sloan, where he became a full professor and served until 1988 as the J.C. Penney Professor of Management. Merton taught at the Harvard Business School from 1988 through 2010, when he returned to MIT.

Among other distinctions and honors in his career, Merton is a member of the National Academy of Sciences, a fellow of the American Academy of Arts and Sciences, and a past president of the American Finance Association. He holds honorary degrees from numerous U.S. and foreign universities.

“I take great pride in this Institute-wide recognition for the field of financial economics and our finance group in the Sloan School,” Merton said while receiving the award. “Every day, the environment at MIT created by its extraordinary community is another day of a continuous renaissance in science, engineering, humanities, management and the arts.”