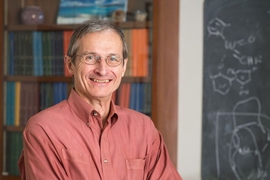 Richard Schrock, a chemist renowned for his pioneering work in organometallic chemistry, has been named the recipient of the 2017-2018 James R. Killian Jr. Faculty Achievement Award.

Schrock’s accomplishments include the development of a reaction known as olefin metathesis, now used for the efficient and more environmentally friendly production of important pharmaceuticals, fuels, and other products. For that work, he was awarded the 2005 Nobel Prize in Chemistry.

“Professor Schrock’s pioneering research efforts in inorganic and organometallic chemistry have defined the direction of the field,” according to the award committee’s citation, which was read at the May 17 faculty meeting by Joseph Paradiso, chair of the Killian Award selection committee and the Alexander W. Dreyfoos Professor in Media Arts and Sciences.

“It’s an honor to be joining such a distinguished group,” Schrock said.

Schrock became interested in chemistry at age 8, when he received a chemistry set passed down from his older brother. “This was back in the days when the chemistry set actually had some good stuff in it,” he told MIT News.

After earning his bachelor’s degree in 1967 from the University of California at Riverside, Schrock earned a PhD in inorganic chemistry from Harvard University in 1971. He spent a year as a National Science Foundation postdoc at Cambridge University, then worked for three years at the Central Research and Development Department of DuPont Co. before joining the MIT faculty in 1975. He became a full professor in 1980 and was named the Frederick G. Keyes Professor of Chemistry in 1989.

Olefin metathesis, the reaction for which Schrock won the Nobel, involves breaking and making double bonds between carbon atoms to produce new types of carbon-carbon double bonds. In 1990, Schrock was the first chemist to develop a catalyst that could perform this reaction without the need for volatile reagents. His catalysts, which contain the metal molybdenum, can perform metathesis quickly and under mild conditions.

In another branch of research, Schrock was the first to perform the catalytic production of ammonia from nitrogen gas under mild conditions, in 2003. “The development of such processes has the potential to improve the capability for successful small-farm agriculture in the developing world by creating a method to make fertilizer from molecular nitrogen in the air,” according to the award committee.

Currently fertilizer is produced through the Haber-Bosch process, which combines nitrogen and hydrogen are at extremely high temperatures (500 degrees Celsius) and pressures (300 atmospheres), which requires huge amounts of energy.

Over his career at MIT, Schrock has mentored more than 185 graduate students and postdocs, and he remains active in both research and teaching, including serving as one of the lecturers in MIT’s freshman chemistry course.

“He began this challenging teaching assignment in the early 1990s and returned to it after winning the Nobel Prize — exactly what we expect of outstanding MIT faculty who aim to inspire undergraduates to great achievements. It is said that Professor Schrock’s relaxed demeanor and his instinctive understanding of the science make his lectures a joy to attend,” the award committee wrote in its citation.