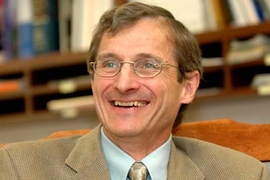 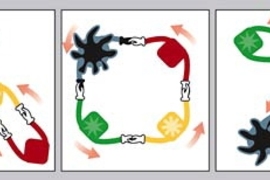 ↓ Download Image
Caption: Metathesis can be viewed as a dance of two molecules, with a catalyst pair (left) that includes a metal (black) joining "hands" with an alkene (yellow/red) pair. The pair then join in a circle (center), and then go off with different partners (right).
Credits: Image courtesy / Nobel Foundation

Caption:
Metathesis can be viewed as a dance of two molecules, with a catalyst pair (left) that includes a metal (black) joining "hands" with an alkene (yellow/red) pair. The pair then join in a circle (center), and then go off with different partners (right).
Credits:
Image courtesy / Nobel Foundation

MIT Professor Richard R. Schrock has won the 2005 Nobel Prize in chemistry for the development of a chemical reaction now used daily in the chemical industry for the efficient and more environmentally friendly production of important pharmaceuticals, fuels, synthetic fibers and many other products.

Schrock, the Frederick G. Keyes Professor of Chemistry at MIT, shares the prize with Yves Chauvin of the Institut FranÃ§ais du PÃ©trole and Robert H. Grubbs of Caltech "for the development of the metathesis method in organic synthesis."

Metathesis was discovered in the 1950s by industry researchers, but was not understood until 1971. That was when Chauvin proposed a mechanism for the reaction, in which double bonds are broken and made between carbon atoms in ways that cause atom groups to change places, much like a dance in which the couples change partners. This happens with the assistance of special catalyst molecules.

Once the "recipe" for metathesis was known, the next step was to develop the catalysts. In 1990, Schrock was the first to do this. Two years later Grubbs developed an even better catalyst.

"Before these catalysts there was no way to do [the metathesis reaction] simply," Schrock explained at a press conference held at MIT this morning. "Some of the processes involved rather dramatic agents like ozone, which you can't use safely in the lab day to day."

Together, the laureates' contributions have allowed the creation of many new compounds more efficiently. "Instead of doing something in 10 or 15 steps, you can do it in five steps," Schrock said.

As a result, their work has "already assumed major significance in the chemicals industry, opening up new opportunities for synthesizing molecules that will streamline the development and industrial production of pharmaceuticals, plastics and other materials," according to the Nobel committee.

The production of those materials is also cheaper and more environmentally friendly. The shorter synthesis routes mean fewer byproducts, and the control made possible by the reaction allows more efficient manipulation of raw materials.

Many researchers foresaw the great synthetic potential of metathesis, according to the Nobel committee, but traditional catalysts were ill-suited to applications because they were relatively short-lived - susceptible to air, moisture and side reactions.

Schrock began working on the problem in the 1970s. He knew from Chauvin's work that successful catalysts would contain a metal. But which was the best to use? He tried catalysts containing metals such as tantalum, tungsten and molybdenum, gradually developing an understanding of what metals could be used in the catalysts.

For Schrock, molybdenum and tungsten soon appeared to be the most suitable metals. He produced some catalysts with those metals, but there were still problems.

Then in 1990 the chemist and co-workers reported the construction of a group of very active, well-defined molybdenum catalysts. Although these catalysts are sensitive to oxygen and moisture, "with the right treatment they are very powerful tools in organic synthesis," according to the Nobel committee.

In 1996 Schrock received the American Chemical Society Award in Inorganic Chemistry for his efforts to develop cleaner and more efficient ways to manufacture chemicals. Accepting the award at the society's national meeting, Schrock said, "The real impact here is ultimately in making pharmaceuticals, polymers and other products where exquisite control is necessary, and now it's possible."

Schrock achieved that exquisite control, according to the citation, with catalysts structured to lock onto and bring together molecules that normally do not react. He focused on those catalysts that contain a metal to which the molecules bind, allowing them to react with each other.

"This will reduce the amount of waste and make the environment safer and cleaner in the long run," he said. "For example, the idea is to conduct a reaction in water instead of [the industrial solvent] toluene."

Schrock's particular contribution, the society said, "was to develop a method and a catalyst to break open compounds whose atoms are arranged in a ring. Once opened up into chains, these molecules can be strung together in specific ways to form polymers for everything from garbage cans to athletic clothing. Or he can close up a chain into a ring, for example, from which medicinal chemists can design pharmaceuticals."

Schrock obtained the B.A. degree in 1967 from the University of California at Riverside and the Ph.D. from Harvard University in 1971. He spent a year as a National Science Foundation postdoctoral fellow at Cambridge University followed by three years at the Central Research and Development Department of E.I. duPont de Nemours and Co. before joining the MIT faculty in 1975. He became a full professor in 1980 and was named the Frederick G. Keyes Professor of Chemistry in 1989.

He is a member of the American Academy of Arts and Sciences and the National Academy of Sciences. He was associate editor of Organometallics for eight years and has published more than 400 research papers.

In addition to the 1996 ACS Award in Inorganic Chemistry, he has received the ACS Award in Organometallic Chemistry (1985), the Harrison Howe Award of the Rochester ACS section (1990), an Alexander von Humboldt Award (1995), the Bailar Medal from the University of Illinois (1998), an ACS Cope Scholar Award in 2001 and the Sir Geoffrey Wilkinson Medal in 2002.