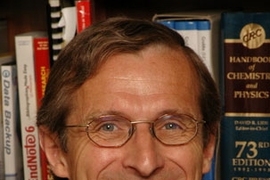 A new class of exceptionally effective chemical catalysts that promote the powerful olefin metathesis reaction has been discovered by a team of Boston College and MIT scientists, opening up a vast new scientific platform to researchers in medicine, biology and materials.

The new catalysts can be easily prepared and possess unique features never before utilized by chemists, according to findings from a team led by professors Amir Hoveyda of BC and Richard Schrock of MIT. The team's findings are reported in the current online edition of the journal Nature.

"In order for chemists to gain access to molecules that can enhance the quality of human life, we need reliable, highly efficient, selective and environmentally friendly chemical reactions," said Hoveyda, the Joseph T. and Patricia Vanderslice Millennium Professor and Chemistry Department chairman at BC. "Discovering catalysts that promote these transformations is one of the great challenges of modern chemistry."

Catalytic olefin metathesis transforms simple molecules into complex ones. But a chief challenge has been developing catalysts to this organic chemical reaction that are practical and offer exceptional selectivity for a significantly broader range of reactions.

Schrock, the Frederick G. Keyes Professor of Chemistry at MIT who won the 2005 Nobel Prize in chemistry, said the unprecedented level of control the new class of catalysts provides will advance research across multiple fields.

"We expect this highly flexible palette of catalysts to be useful for a wide variety of catalytic reactions that are catalyzed by a high oxidation state alkylidene species, and to be able to design catalytic metathesis reactions with a control that has rarely if ever been observed before," Schrock said.

Highly versatile molecules that contain carbon -- carbon double bonds, alkenes, or olefins, are ubiquitous in medicinally relevant and biologically active molecules. Tetrahedral in constitution, the new catalysts are the first to exploit a metal with four different ligands -- molecules that bond to the central metal -- which in turn dictate the catalysts' high level of reactivity and selectivity.

"For the first time these catalysts take advantage of the configuration of a metal with four different ligands attached to it, an untested situation that has long been predicted to be a strong director of asymmetric catalytic reactions that take place at the metal center," said Schrock.

A novel aspect at the center of the catalyst is that the metal molybdenum is a source of chirality, also known as "handedness." Like the mirror image of left hand and right, molecules can come in two variations, one a reflection of the other. But these two variations often function in entirely different ways -- sometimes one proves harmful, while the other is benign.

With molybdenum at its core, the new catalyst gives chemists a simple, unique and efficient way to produce one form of the molecule or the other in order to yield the desired reactions.

The new catalysts are also structurally flexible, a relatively unconventional attribute that lends them exceptional chemical activity. The discovery of catalysts with stable configurations and flexible structures is expected to allow chemists to design, prepare and develop new chemical transformations that furnish unprecedented levels of reactivity and selectivity, according to the co-authors, which include BC researchers Steven J. Malcolmson, Simon J. Meek, and Elizabeth S. Sattely.

The findings mark the latest discovery from the long-standing collaboration between the Hoveyda and Schrock labs, work that has been supported by more than $3.5 million in funding from the National Institutes of Health for nearly a decade.

"Unquestioned leaders in their own areas of science, Hoveyda and Schrock have pooled their complementary skills to come up with an elegant solution to an elusive goal --Â the development of catalysts for enantioselective olefin metathesis," said John Schwab, who oversees organic synthesis grants at the NIH's National Institute of General Medical Sciences. "This is a beautiful illustration of the power of collaborative science."

Adapted from a news release issued by Boston College.