An astrophysicist in a biomedical universe 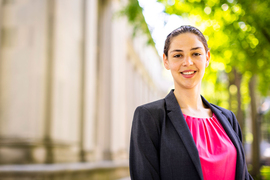 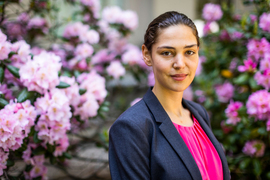 ↓ Download Image
Caption: Allen works at the intersection of physics and medical research, co-advised by Harvard University Professor Ciprian Catana at the Integrated MR-PET Laboratory at the Massachusetts General Hospital A. A. Martinos Center for Biomedical Imaging and MIT Professor Or Hen at the Laboratory for Nuclear Science. “It was a perfect fit,” she says.
Credits: Photo: Adam Glanzman

Caption:
Allen works at the intersection of physics and medical research, co-advised by Harvard University Professor Ciprian Catana at the Integrated MR-PET Laboratory at the Massachusetts General Hospital A. A. Martinos Center for Biomedical Imaging and MIT Professor Or Hen at the Laboratory for Nuclear Science. “It was a perfect fit,” she says.
Credits:
Photo: Adam Glanzman

For many of us, the pandemic sparked pivotal changes. And Magdelena S. Allen was no exception.

Growing up in Portland, Oregon, Allen wanted to learn about everything. She loved stargazing and the physical sciences, but she was also interested in law and writing. Her parents, who homeschooled her and her sister until high school, were extremely supportive of her various interests. “But the thing I always kept coming back to was science,” she says.

An astrophysicist by training, Allen completed her undergraduate degree at the University of California at Berkeley. She then spent a year interning at physics research labs around the country, including the Fermi National Accelerator Lab, the Brookhaven National Lab, and the Marshall Space Flight Center at NASA.

In the fall of 2019, Allen started her PhD in the Nuclear and Particle Experiment Division of MIT’s physics department, studying cosmic rays with Professor Samuel C. C. Ting. She spent her time analyzing data from the Alpha Magnetic Spectrometer, a cosmic ray detector that sits on the International Space Station.

Around that time, Allen also joined the MIT Emergency Medical Services (EMS), after hearing about it from a friend who was involved a couple years prior. “It started out as what I thought would be a few hours a week and quickly took over my life in the best way possible,” she says.

When the pandemic hit in spring 2020 and the MIT community scrambled to disperse from campus, Allen was one of the few MIT EMTs who stayed behind. She helped keep the ambulance in service 24/7, serving MIT as well as the broader Cambridge and Boston community. “I wound up putting over a thousand hours into the service” this academic year alone, she says.

Spending so much time in patient care spurred her interest in patient outcomes. And that got her thinking about her long-term career goals. “I had my existential crisis during that period — as we all did,” she says with a laugh. While she loved her research in fundamental physics, she wanted to have a more direct impact on people.

Allen began looking for research groups working on biomedical devices. In January 2021, she joined a new research project to build brain imaging hardware, which uses technology similar to some fundamental physics experiments. She now works at the intersection of physics and medical research, co-advised by Harvard University Professor Ciprian Catana at the Integrated MR-PET Laboratory at the Massachusetts General Hospital A. A. Martinos Center for Biomedical Imaging and MIT Professor Or Hen at the Laboratory for Nuclear Science. “It was a perfect fit,” she says.

Uncovering the secrets of the brain

Today, Allen and her collaborators are developing a next-generation brain positron emission tomography (PET) scanner that can be used simultaneously with 7-Tesla magnetic resonance imaging (MRI). The PET scanner will be a cylindrical insert that fits directly inside an MRI machine.

Each imaging technology provides a different perspective of the brain. While MRI captures anatomical images, PET captures biochemical processes, such as metabolism. By seeing two synchronized perspectives, scientists have valuable data for studying brain tumors and neurological diseases, such as Alzheimer’s.

But, PET scans currently take a long time — usually 30 to 90 minutes — and patients must hold still for the entire duration to get clear images. In the next-generation PET scanner, Allen aims to make scans much quicker, down to just a couple of minutes. Doing so will also open doors for neuroscience research. With shorter imaging times, the scanner can work simultaneously with functional MRI (fMRI) to take quick snapshots of dynamic biological processes. For example, PET can capture glucose metabolism in the brain as fMRI simultaneously captures blood flow. “It’s really exciting,” Allen says. “It’s never been done before.”

The reason why these scans currently take so long lies in how PET works. Before the scan, patients are injected with a radiotracer made of biological compounds that the body normally uses, such as glucose, which are slightly modified to be radioactive. As the body processes these tracer compounds, radioactive gamma rays are emitted. The PET scanner then acts as a camera to capture these gamma rays and form an image.

The problem, though, is that only small doses of radiotracer are injected in patients to limit adverse radiation effects. So, the emitted gamma rays are very faint, making it hard for images to form. “It’s like a long exposure picture with a regular camera where you’re just waiting for light to be collected,” Allen says.

To reduce the required exposure time, Allen’s group is redesigning the MR-compatible PET scanner to be 10 times more sensitive to gamma rays than the current state-of-the-art. And to achieve this, a new form of gamma ray detector will be used inside the scanner. While a typical scanner uses detector arrays arranged in a cylindrical tube surrounding the head, the detector arrays of the new scanner are configured more like a motorcycle helmet. “You can boost the [scanner’s] sensitivity a lot just by getting more coverage,” she says.

Another key part for making a high-sensitivity PET scanner is the individual gamma ray detector modules inside the detector. The detector is composed of rings stacked from the neck up, and each ring contains a circle of detector modules. “The most interesting investigation so far is [figuring out] different geometries for the detector in order to get clean information out of it,” she says. One challenge is finding the depth-of-interaction methodology and optimal thickness for the detector. A thicker detector can trap more gamma rays for more imaging information. But, a detector that’s too thick yields blurry images. After some trial-and-error, though, Allen is “very close to nailing down a final design.”

While Allen has ventured into the biomedical universe, she hasn’t completely left particle physics behind. It turns out that the PET scanner can also be used to investigate fundamental physics questions.

One question that Allen is interested in is symmetry violation. While the universe is composed of matter and anti-matter, it’s not a 50-50 split, giving us an asymmetric universe. But, it’s not clear where this asymmetry comes from. “We’re always searching for sources of asymmetry in the universe,” Allen says.

A potential clue might be found in the life cycle of positronium, an unstable atom composed of an electron and its anti-particle, a positron. Positronium lasts for a very short period of time — less than a millionth of a second — before the electron and positron annihilate each other, emitting gamma rays. Depending on the initial state of positronium, different distributions of gamma rays are emitted.

“The PET scanner is basically just a gamma ray detector,” she says, making it “perfectly tuned” to look at gamma rays from positronium decays. To investigate symmetry violation, Allen plans to observe how acting on the initial states of positronium affects the orientation of emitted gamma rays. If she sees any asymmetries, this could provide insight into understanding symmetry violation.

But first, Allen needs to finish building the PET scanner. After finalizing the design of the detector modules, she’ll begin assembling them into rings for the helmet this summer. In the meantime, she’ll continue serving in MIT EMS, having just wrapped up her tenure as chief of MIT EMS this past year. “It’s a very addicting thing to do,” she says.