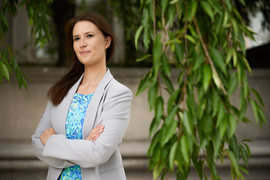 As a teenager, Kristy Johnson thought she had her career all planned out. Raised in a small town in Indiana, she spent much of her childhood stargazing and mapping constellations. She dreamed of becoming an astrophysicist and pursued a rigorous academic path. After achieving top honors as an undergraduate, Johnson immediately began a PhD program in physics at the University of Maryland.

Everything changed when she discovered her son, Felix, had a rare genetic disorder, one with only seven known cases in the world. The condition is associated with delayed development, absent speech, severe intellectual disabilities, autism, epilepsy, and motor challenges.

“We knew that this would be something that would affect him for his entire life, and therefore us as a family. I knew I wanted and needed to stay home with him instead of finishing my PhD,” says Johnson.

Building a future for her son

For the next five years, Johnson poured the dedication she had honed as a grad student into caring for her son. While in the evenings she edited scientific manuscripts and taught college astronomy to earn a living, her free time was spent learning everything she could about her son’s condition. Johnson studied genetics, neuroscience, and even taught herself American Sign Language as a new way to connect with him.

Yet for Johnson, this wasn’t enough. Her son was still struggling to meet milestones. He showed intense interest in certain songs and music but was still not engaging or learning on his own. She realized that if the tools her son needed to succeed didn’t exist, she would have to make them herself. “I bought an Arduino and started programming things to react with his movements and encourage him to learn,” says Johnson. “Most of the things I built were out of cardboard, scraps of wood, and old toys. It was after I received a $300 grant from the Artisan’s Asylum, a makerspace in Somerville, that I was able to make my first real prototypes.”

As her son grew older, Johnson began to consider returning to research. But so much of her purpose had changed. “I realized physics wasn’t the love of my life anymore — my son was. And I knew that I wanted to pursue research that would improve his life and the lives of people like him,” Johnson says.

Her old resume, entirely physics-oriented, couldn’t begin to convey the countless hours she had spent studying neurodevelopmental disorders. In her search for a research program, she faced several rejections before finding the MIT Media Lab, which welcomes individuals with unique backgrounds and focuses on multidisciplinary research. “It’s like the academic island of misfit toys,” jokes Johnson. “I’m so grateful that it exists. I’ve never felt more at home anywhere in my entire life.”

Today, Johnson is a senior graduate student in the Picard Lab. She has led a variety of projects that support individuals with neurodevelopmental differences. Her work in the Affective Computing Group uses wearable devices that measure changes in the electrical properties of the skin. “These devices can be worn on the wrist and serve as a proxy for sympathetic nervous system responses,” she says.

“Before, people like my son would often struggle to come into a clinical setting. With wearable devices, you can unobtrusively observe populations in their normal environments,” she says. Johnson has pursued neuroscience research that combines these wearable sensors with deep brain stimulation in epilepsy patients and fMRI neuroimaging with children with autism. “We’re really expanding our knowledge of what’s happening in the brain and how that relates to everyday life.”

Johnson is also currently collaborating with MIT graduate student Jaya Narain as well as researchers at MIT Lincoln Lab and Harvard University on Commalla, a research project whose name combines “communication” and “all.” The team is working to capture, characterize, and classify nonverbal vocalizations from a population that she refers to as mv*. The term encompasses those with 20 or fewer spoken words, potentially due to genetic disorders, intellectual disabilities, autism spectrum disorder, and/or other neurological conditions.

“Nonverbal vocalizations are sounds like ‘uh huh’ or ‘ahh’ that have an associated emotion or meaning. Their meanings have been studied in infants and many other species and animals,” says Johnson. “Yet, they have not been studied in mv* individuals, which is mind-blowing and frustrating to me. Not only does my son fall into this category, but so do over 1 million individuals in the U.S.”

These nonverbal vocalizations can be recorded through the Commalla app and labeled with the correct meaning by a knowledgeable caretaker. All of this is done remotely, meaning the research has been able to continue throughout the global pandemic and to reach the geographically dispersed mv* community, Johnson says. The team then takes these recordings and has started to develop machine-learning models that help interpret an individual’s vocalizations in real time. The recordings can also be easily shared to help those who may be communicating with the individual for the first time. “Many mv* individuals are robustly communicating, but their listener is trained only for speech. We want to help them be heard and understood,” she says. “I’m hopeful that this project is something we can continue to expand and grow into the basis of a new field.”

Johnson will defend her PhD next week and recently accepted a postdoc at Boston Children’s Hospital, where she will continue research in translational neuroscience for children with neurodevelopmental disorders or differences. She hopes her research will deepen our understanding of communication from all individuals and empower mv* individuals, including her son, to be seen for all they can do.

“Just as in astronomy, we must study our brains indirectly to begin to unravel their complexity,” says Johnson. “Brains are a human cosmos, filled with so much that we recognize as beautiful but have yet to understand.”

A legacy of curiosity in the name of Hugh Hampton Young