When coated onto plastic tubing, the catalysts could act on chemicals flowing through, helping to synthesize drugs and other compounds.
Anne Trafton | MIT News Office
Publication Date:
Press Inquiries 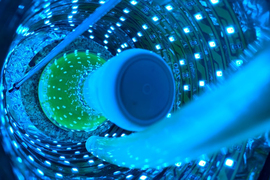 ↓ Download Image
Caption: MIT chemists have designed a new type of photoredox catalyst that could make it easier to incorporate light-driven reactions into continuous flow manufacturing processes. The polymer catalysts could be used to coat tubing and perform chemical transformations on reactants as they flow through the tube, as imagined in this digital artwork.
Credits: Image: Richard Liu

Caption:
MIT chemists have designed a new type of photoredox catalyst that could make it easier to incorporate light-driven reactions into continuous flow manufacturing processes. The polymer catalysts could be used to coat tubing and perform chemical transformations on reactants as they flow through the tube, as imagined in this digital artwork.
Credits:
Image: Richard Liu

Chemical reactions that are driven by light offer a powerful tool for chemists who are designing new ways to manufacture pharmaceuticals and other useful compounds. Harnessing this light energy requires photoredox catalysts, which can absorb light and transfer the energy to a chemical reaction.

MIT chemists have now designed a new type of photoredox catalyst that could make it easier to incorporate light-driven reactions into manufacturing processes. Unlike most existing photoredox catalysts, the new class of materials is insoluble, so it can be used over and over again. Such catalysts could be used to coat tubing and perform chemical transformations on reactants as they flow through the tube.

The new catalysts, which can be tuned to perform many different types of reactions, could also be incorporated into other materials including textiles or particles.

Timothy Swager, the John D. MacArthur Professor of Chemistry at MIT, is the senior author of the paper, which appears today in Nature Communications. Sheng Guo, an MIT research scientist, and Shao-Xiong Lennon Luo, an MIT graduate student, are also authors of the paper.

Photoredox catalysts work by absorbing photons and then using that light energy to power a chemical reaction, analogous to how chlorophyll in plant cells absorbs energy from the sun and uses it to build sugar molecules.

Chemists have developed two main classes of photoredox catalysts, which are known as homogenous and heterogenous catalysts. Homogenous catalysts usually consist of organic dyes or light-absorbing metal complexes. These catalysts are easy to tune to perform a specific reaction, but the downside is that they dissolve in the solution where the reaction takes place. This means they can’t be easily removed and used again.

Heterogenous catalysts, on the other hand, are solid minerals or crystalline materials that form sheets or 3D structures. These materials do not dissolve, so they can be used more than once. However, these catalysts are more difficult to tune to achieve a desired reaction.

“These hybrid catalysts have the recyclability and durability of heterogeneous catalysts, but also the precise tunability of homogeneous catalysts,” Liu says. “You can incorporate the dye without losing its chemical activity, so, you can more or less pick from the tens of thousands of photoredox reactions that are already known and get an insoluble equivalent of the catalyst you need.”

The researchers found that incorporating the catalysts into polymers also helped them to become more efficient. One reason is that reactant molecules can be held in the polymer’s pores, ready to react. Additionally, light energy can easily travel along the polymer to find the waiting reactants.

“The new polymers bind molecules from solution and effectively preconcentrate them for reaction,” Swager says. “Also, the excited states can rapidly migrate throughout the polymer. The combined mobility of the excited state and partitioning of the reactants in the polymer make for faster and more efficient reactions than are possible in pure solution processes.”

The researchers also showed that they could tune the physical properties of the polymer backbone, including its thickness and porosity, based on what application they want to use the catalyst for.

As one example, they showed that they could make fluorinated polymers that would stick to fluorinated tubing, which is often used for continuous flow manufacturing. During this type of manufacturing, chemical reactants flow through a series of tubes while new ingredients are added, or other steps such as purification or separation are performed.

Currently, it is challenging to incorporate photoredox reactions into continuous flow processes because the catalysts are used up quickly, so they have to be continuously added to the solution. Incorporating the new MIT-designed catalysts into the tubing used for this kind of manufacturing could allow photoredox reactions to be performed during continuous flow. The tubing is clear, allowing light from an LED to reach the catalysts and activate them.

“The idea is to have the catalyst coating a tube, so you can flow your reaction through the tube while the catalyst stays put. In that way, you never get the catalyst ending up in the product, and you can also get a lot higher efficiency,” Liu says.

The catalysts could also be used to coat magnetic beads, making them easier to pull out of a solution once the reaction is finished, or to coat reaction vials or textiles. The researchers are now working on incorporating a wider variety of catalysts into their polymers, and on engineering the polymers to optimize them for different possible applications.

The research was funded by the National Science Foundation and the KAUST Sensor Initiative.