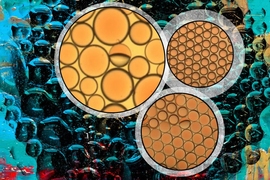 ↓ Download Image
Caption: MIT researchers designed these complex emulsions to change their configuration in response to stimuli, such as light, or the addition of a chemical surfactant.
Credits: Illustration: Christine Daniloff/MIT

Caption:
MIT researchers designed these complex emulsions to change their configuration in response to stimuli, such as light, or the addition of a chemical surfactant.
Credits:
Illustration: Christine Daniloff/MIT

MIT researchers have devised a new way to make complex liquid mixtures, known as emulsions, that could have many applications in drug delivery, sensing, cleaning up pollutants, and performing chemical reactions.

Many drugs, vaccines, cosmetics, and lotions are emulsions, in which tiny droplets of one liquid are suspended in another liquid. A salad dressing of vinegar and olive oil is another example of a simple emulsion.

Scientists can also create more complex emulsions, such as double emulsions — for example, water suspended inside oil droplets suspended in water. In the new paper, the MIT team developed a simple way to make such emulsions. They can also finely tune the configuration of droplets by adding different chemicals or exposing them to light or to different acidity levels.

This kind of control over the dynamic properties of emulsions could make it easier for scientists to tailor them to specific applications. The new method also enables rapid, large-scale production of such droplets.

“We believe that by having this precise and easy way of controlling the morphology of the complex emulsion, we may be able to tune those physical and chemical properties to use them to our advantage,” says Lauren Zarzar, an MIT postdoc and the lead author of a paper describing the new method in the Feb. 25 online edition of Nature.

MIT researchers explain how they are able to precisely control the configuration of complex emulsions.

The simplest way to make an emulsion is to shake together two liquids, such as oil and water, that don’t dissolve in each other, along with a surfactant — a chemical, such as soap, that lowers the surface tension between two liquids. Emulsions are commonly used for medicines that are taken orally; they consist of a drug carried by oil droplets suspended in water. This prevents the drugs from breaking down in the body before they reach their intended destination.

Recently, scientists have become interested in creating more complex emulsions, such as double emulsions, which add another layer surrounding the droplets and could enable oral delivery of drugs that cannot be dissolved in oil, as well as other applications.

Previous research has shown that this kind of emulsion can be made with a microfluidic device that squeezes bubbles of oil into droplets of water that float in a stream of oil. However, this works best for small-scale production. The MIT team set out to find a simple way to create large quantities of this type of complex emulsion, with precise control over the composition of the resulting droplets.

To achieve that, the researchers devised a two-step process. The first step relies on mixing together two liquids that will only mix above a certain temperature; in this case, the two oils are hexane and perfluorohexane. Perfluorohexane is similar in structure to hexane, except that the hydrogen atoms normally found in the oil are replaced with fluorine atoms.

When heated to about 23 degrees Celsius, these two oils mix together and are emulsified to form droplets of oil suspended in water. Upon cooling, the hexane and perfluorohexane inside each droplet separate, thereby forming a complex emulsion.

This allows the researchers to control which liquid is exposed and which is hidden inside the droplet. The researchers can also create droplets in which each component makes up one hemisphere. To understand and tune the observed evolution of emulsion droplet configurations, the researchers developed a model that can predict droplet structure.

“We can control the entire progression of that configuration,” Zarzar says. “This reconfiguration is very new. Nobody has shown that you can change the morphology of an emulsion like this.”

David Weitz, a professor of physics at Harvard University, says the new method is an elegant approach to creating complex emulsions.

“Traditionally it has been very difficult to create an emulsion that both encapsulates very robustly and releases in a controlled fashion. Here they have a very nice way to control the release, which solves an important problem,” says Weitz, who was not involved in the research.

“Open and close at will”

The researchers also created droplets that can be controlled with surfactants that are sensitive to changes in light and acidity, giving them yet more ways to manipulate the droplet configurations. They are now trying to develop surfactants that would be sensitive to other molecules, such as carbon dioxide or a specific protein, allowing the droplets to act as sensors for those molecules.

The researchers have filed two patents on this technology, which they believe should be attractive for a wide range of applications.

“You can use these emulsions for delivery applications, cleanup applications, anything where you need to protect something, shield something, or pick up and deliver something,” Sresht says. “It’s like a package that you can open and close at will.”

Another possible application is diagnostics. These droplets are very sensitive to how much surfactant is present, which could be useful for diagnosing lung diseases such as asthma that are marked by a lack of pulmonary surfactant.

In addition to pursuing possible uses for these droplets, the researchers are also seeking other types of liquids that could be used to create this kind of emulsion — that is, liquids that mix only at certain temperatures, including higher temperatures than what they are now using.