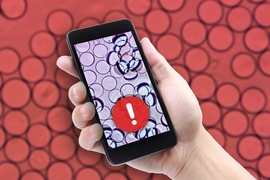 ↓ Download Image
Caption: A new safety test for foodborne pathogens is based on a novel type of liquid droplet that can bind to bacterial proteins. This interaction, which can be detected by either the naked eye or a smartphone, could offer a much faster and cheaper alternative to existing food safety tests.
Credits: Image: Jose-Luis Olivares/MIT (droplet images courtesy of Qifan Zhang) 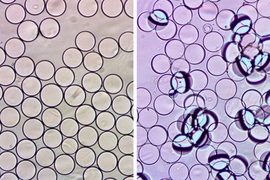 ↓ Download Image
Caption: At left, Janus droplets viewed from above. After the droplets encounter their target, a bacterial protein, they clump together (right).
Credits: Image: Qifan Zhang

Caption:
A new safety test for foodborne pathogens is based on a novel type of liquid droplet that can bind to bacterial proteins. This interaction, which can be detected by either the naked eye or a smartphone, could offer a much faster and cheaper alternative to existing food safety tests.

Caption:
At left, Janus droplets viewed from above. After the droplets encounter their target, a bacterial protein, they clump together (right).

The foodborne pathogen Escherichia coli O157 causes an estimated 73,000 illnesses and 60 deaths every year in the United States. Better safety tests could help avoid some of the illnesses caused by this strain of E. coli and other harmful bacteria, according to MIT researchers who have come up with a possible new solution.

The new MIT test is based on a novel type of liquid droplet that can bind to bacterial proteins. This interaction, which can be detected by either the naked eye or a smartphone, could offer a much faster and cheaper alternative to existing food safety tests.

“It’s a brand new way to do sensing,” says Timothy Swager, the John D. MacArthur Professor of Chemistry at MIT and the senior author of the study. “What we have here is something that can be massively cheaper, with low entry costs.”

The researchers decided to explore using these droplets as sensors because of their unique optical properties. In their natural state, the Janus droplets are transparent when viewed from above, but they appear opaque if viewed from the side, because of the way that light bends as it travels through the droplets.

To turn the droplets into sensors, the researchers designed a surfactant molecule containing mannose sugar to self-assemble at the hydrocarbon–water interface, which makes up the top half of the droplet surface. These molecules can bind to a protein called lectin, which is found on the surface of some strains of E. coli. When E. coli is present, the droplets attach to the proteins and become clumped together. This knocks the particles off balance, so that light hitting them scatters in many directions, and the droplets become opaque when viewed from above.

“We’re using the native molecular recognition that these pathogens use. They recognize each other with these weak carbohydrate-lectin binding schemes.” Swager says. “We took advantage of the droplets’ multivalency to increase the binding affinity, and this is something that is very different than what other sensors are using.”

To demonstrate how these droplets could be used for sensing, the researchers placed them into a Petri dish atop a QR code that can be scanned with a smartphone. When E. coli are present, the droplets clump together and the QR code can’t be read.

Chad Mirkin, a professor of chemistry at Northwestern University and director of the International Institute for Nanotechnology, described the particles as “a powerful new class of assays.”

“They are elegantly simple but rely on clever new approaches to making and manipulating emulsions,” says Mirkin, who was not involved in the research. “This proof-of-concept demonstration in detecting foodborne pathogens is compelling, as they constitute a major class of analytes that defines an unmet need in the biosensor community.”

The MIT team hopes to adapt its new technology into arrays of small wells, each containing droplets customized to detect a different pathogen and linked to a different QR code. This could enable rapid, inexpensive detection of contamination using only a smartphone.

“The great advantage of our device is you don’t need specialized instruments and technical training in order to do this,” Zhang says. “That can enable people from the factory, before shipping the food, to scan and test it to make sure it’s safe.”

The researchers are now working on optimizing the food sample preparation so they can be placed into the wells with the droplets. They also plan to create droplets customized with more complex sugars that would bind to different bacterial proteins. In this paper, the researchers used a sugar that binds to a nonpathogenic type of E. coli, but they expect that they could adapt the sensor to other strains of E. coli and other harmful bacteria.

“You could imagine making really selective droplets to catch different bacteria, based on the sugar we put on them,” Savagatrup says.

The researchers are also trying to improve the sensitivity of the sensor, which currently is similar to existing techniques but has the potential to be much greater, they believe. They hope to launch a company to commercialize the technology within the next year and a half.

The research was funded by the Abdul Latif Jameel World Water and Food Security Lab (J-WAFS) at MIT, the U.S. Army Research Office through the MIT Institute for Soldier Nanotechnologies, the Legatum Center for Development and Entrepreneurship at MIT, the Alexander von Humboldt Foundation, the Max-Planck Society, and the German Research Foundation.