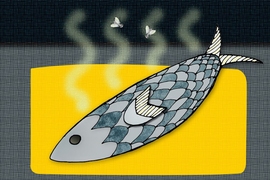 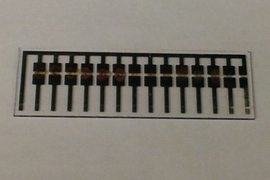 MIT chemists have devised an inexpensive, portable sensor that can detect gases emitted by rotting meat, allowing consumers to determine whether the meat in their grocery store or refrigerator is safe to eat.

The sensor, which consists of chemically modified carbon nanotubes, could be deployed in “smart packaging” that would offer much more accurate safety information than the expiration date on the package, says Timothy Swager, the John D. MacArthur Professor of Chemistry at MIT.

It could also cut down on food waste, he adds. “People are constantly throwing things out that probably aren’t bad,” says Swager, who is the senior author of a paper describing the new sensor this week in the journal Angewandte Chemie.

The sensor is similar to other carbon nanotube devices that Swager’s lab has developed in recent years, including one that detects the ripeness of fruit. All of these devices work on the same principle: Carbon nanotubes can be chemically modified so that their ability to carry an electric current changes in the presence of a particular gas.

In this case, the researchers modified the carbon nanotubes with metal-containing compounds called metalloporphyrins, which contain a central metal atom bound to several nitrogen-containing rings. Hemoglobin, which carries oxygen in the blood, is a metalloporphyrin with iron as the central atom.

For this sensor, the researchers used a metalloporphyrin with cobalt at its center. Metalloporphyrins are very good at binding to nitrogen-containing compounds called amines. Of particular interest to the researchers were the so-called biogenic amines, such as putrescine and cadaverine, which are produced by decaying meat.

When the cobalt-containing porphyrin binds to any of these amines, it increases the electrical resistance of the carbon nanotube, which can be easily measured.

“We use these porphyrins to fabricate a very simple device where we apply a potential across the device and then monitor the current. When the device encounters amines, which are markers of decaying meat, the current of the device will become lower,” Liu says.

In this study, the researchers tested the sensor on four types of meat: pork, chicken, cod, and salmon. They found that when refrigerated, all four types stayed fresh over four days. Left unrefrigerated, the samples all decayed, but at varying rates.

There are other sensors that can detect the signs of decaying meat, but they are usually large and expensive instruments that require expertise to operate. “The advantage we have is these are the cheapest, smallest, easiest-to-manufacture sensors,” Swager says.

“There are several potential advantages in having an inexpensive sensor for measuring, in real time, the freshness of meat and fish products, including preventing foodborne illness, increasing overall customer satisfaction, and reducing food waste at grocery stores and in consumers’ homes,” says Roberto Forloni, a senior science fellow at Sealed Air, a major supplier of food packaging, who was not part of the research team.

The new device also requires very little power and could be incorporated into a wireless platform Swager’s lab recently developed that allows a regular smartphone to read output from carbon nanotube sensors such as this one.

The researchers have filed for a patent on the technology and hope to license it for commercial development. The research was funded by the National Science Foundation and the Army Research Office through MIT’s Institute for Soldier Nanotechnologies.

Rachel Fobar writes for Popular Science about a sensor developed by Prof. Timothy Swager’s team that can predict when food will spoil. The sensor could be used in "'smart packaging' that could help provide more accurate information than an expiration date,” writes Fobar.