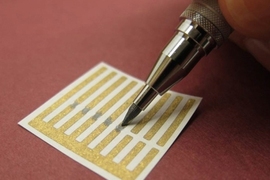 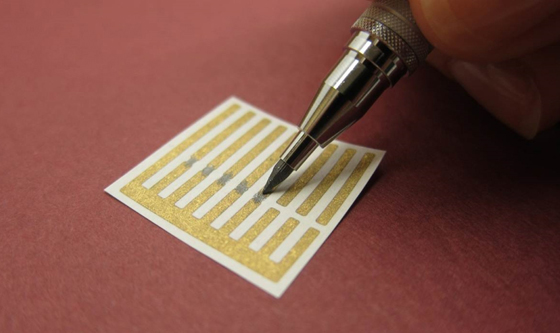 Carbon nanotubes offer a powerful new way to detect harmful gases in the environment. However, the methods typically used to build carbon nanotube sensors are hazardous and not suited for large-scale production.

A new fabrication method created by MIT chemists — as simple as drawing a line on a sheet of paper — may overcome that obstacle. MIT postdoc Katherine Mirica has designed a new type of pencil lead in which graphite is replaced with a compressed powder of carbon nanotubes. The lead, which can be used with a regular mechanical pencil, can inscribe sensors on any paper surface.

The sensor, described in the journal Angewandte Chemie, detects minute amounts of ammonia gas, an industrial hazard. Timothy Swager, the John D. MacArthur Professor of Chemistry and leader of the research team, says the sensors could be adapted to detect nearly any type of gas.

“The beauty of this is we can start doing all sorts of chemically specific functionalized materials,” Swager says. “We think we can make sensors for almost anything that’s volatile.”

Other authors of the paper are graduate student Jonathan Weis and postdocs Jan Schnorr and Birgit Esser.

Carbon nanotubes are sheets of carbon atoms rolled into cylinders that allow electrons to flow without hindrance. Such materials have been shown to be effective sensors for many gases, which bind to the nanotubes and impede electron flow. However, creating these sensors requires dissolving nanotubes in a solvent such as dichlorobenzene, using a process that can be hazardous and unreliable.

Swager and Mirica set out to create a solvent-free fabrication method based on paper. Inspired by pencils on her desk, Mirica had the idea to compress carbon nanotubes into a graphite-like material that could substitute for pencil lead.

The researchers tested their device on several different types of paper, and found that the best response came with sensors drawn on smoother papers. They also found that the sensors give consistent results even when the marks aren’t uniform.

Two major advantages of the technique are that it is inexpensive and the “pencil lead” is extremely stable, Swager says. “You can’t imagine a more stable formulation. The molecules are immobilized,” he says.

The new sensor could prove useful for a variety of applications, says Zhenan Bao, an associate professor of chemical engineering at Stanford University. “I can already think of many ways this technique can be extended to build carbon nanotube devices,” says Bao, who was not part of the research team. “Compared to other typical techniques, such as spin coating, dip coating or inkjet printing, I am impressed with the good reproducibility of sensing response they were able to get.”

Sensors for any gas

In this study, the researchers focused on pure carbon nanotubes, but they are now working on tailoring the sensors to detect a wide range of gases. Selectivity can be altered by adding metal atoms to the nanotube walls, or by wrapping polymers or other materials around the tubes.

One gas the researchers are particularly interested in is ethylene, which would be useful for monitoring the ripeness of fruit as it is shipped and stored. The team is also pursuing sensors for sulfur compounds, which might prove helpful for detecting natural gas leaks.

The research was funded by the Army Research Office through MIT’s Institute for Soldier Nanotechnologies and a National Institutes of Health fellowship to Mirica.