Whether learning about new music or a new culture, PhD student Jamie Wong takes a similar approach: Seek out the experts, then “try to play along and keep up.”
Rachel Yang | MIT News correspondent
Publication Date:
Press Inquiries 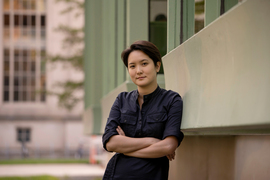 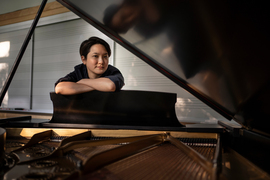 ↓ Download Image
Caption: As Wong gains insight into China’s economic and government structures, she also hopes to get a better understanding of “what lies ahead for Hong Kong.”
Credits: Image: Jodi Hilton

Caption:
As Wong gains insight into China’s economic and government structures, she also hopes to get a better understanding of “what lies ahead for Hong Kong.”
Credits:
Image: Jodi Hilton

As a teenager, Jamie Wong was a professional pop songwriter. Now, she’s an anthropologist studying venture capitalism in China. Her key turning point? Coaching a prison band in Hong Kong.

“When I tell people this, they’re always quite surprised,” she says. “But [my journey] feels so natural to me.”

Wong grew up in Hong Kong as an only child. Her father is a landscape architect, and her mother is a homemaker.She always loved music and trained as a classical pianist. In high school, Wong ventured into pop, writing a song for a contestant in a music competition. A producer, upon hearing her song, recruited her to write pop songs for local singers in Hong Kong, which she continued to do throughout high school.

But after graduating, Wong was hesitant to pursue pop songwriting full-time, as she still loved classical music and wanted more formal training. Instead, she pursued a bachelor’s in music at the Chinese University of Hong Kong. During that time, she was invited to coach a band of young men around her age at the Pik Uk Correctional Institute. Wong attended practice sessions with the band twice a week over her three years at university.

“As I was playing music with them, I learned more about their lives” and what brought them to the correctional institute, she says. “That was a very formative experience, to understand their points of view.” The experience served as her first foray into a branch of anthropology called ethnography, where researchers strive to learn about cultures by observing them firsthand.

Wong kept in touch with the band members after they left prison and tried to reintegrate into society. “A lot of them did gig economy work,” relying on digital platforms to find their next job, she says. But they had trouble keeping up with the constant changes in platform regulations and interfaces. One man told Wong that he felt he had no control over his life, as though he were still in prison. Seeing the hold that the digital economy had on these men’s lives, “I wanted to understand how this economy came into so much power in such a short amount of time,” she says.

Through this line of questioning, Wong developed a broader interest in the startup economy and venture capitalism in China. Now, through ethnography, she is researching how these economic structures have taken hold in China and influenced Chinese businesses and government. As she gains insight into China’s economic and government structures, she also hopes to get a better understanding of “what lies ahead for Hong Kong,” she says. For her research, Wong is advised by Graham Jones, a professor of anthropology at MIT.

Venture capitalism is a relatively new system in China, having come from the western world. “In the beginning, there was a lot of friction in trying to domesticate venture capitalism in China” due to cultural clashes, Wong says. Yet, China ultimately adopted this system.

To understand how, Wong made several trips to China to gather information from within the system. Her research trips started five years ago, with annual visits to a top Chinese university. During these trips, she spoke with people working in local government, startups, and investment firms, collecting oral histories of this period of change.

To gain a deeper understanding of VC culture, she then spent a more than a year at a Chinese VC firm in Shenzhen, with a break during the Covid-19 pandemic. At the firm, Wong immersed herself in the VC environment, shadowing meetings, sitting in on startup pitches, and joining site visits to different companies. Initially, being surrounded by experts in a world that she knew little about intimated her. But her music background enabled her to embrace her discomfort. “The best way to learn a new genre of music is to immerse yourself in an environment [with experienced musicians] and to try to play along and keep up,” she says, carrying over this lesson into her research.

Through her research trips to China, Wong has pieced together an oral history of China’s rough journey in adopting venture capitalism. She has found that initially, the Chinese approach to investment deviated greatly from its western counterparts. Many Chinese investors had previously grown rich overnight and were itching to earn more money quickly, she says. Because of that, they often chased profits, only looking at short-term gains for investments and neglecting to consider long-term business growth. This model became unsustainable, and many Chinese VC funds ended up failing.

Subsequently, Wong has noticed many Chinese investors shifting to a more western model with longer-term investments. In this model, investors bet on the growth potential for a company, with the expectation that a return on any one of their investments could take years, or not materialize at all. Betting so far into the future can reap great rewards, but it’s also incredibly risky. “Most of the startups in a VC’s portfolio will fail,” Wong says, but to turn a profit, all investors need is a few successful “moonshots.”

Wong has observed this shift in VC approaches across generations. As older generations of Chinese VCs struggle to recover from their early mistakes, incoming VCs have fully embraced the moonshot approach. “Their mindset has already shifted,” Wong says.

As a musician, Wong is used to spotting connections across an expansive music score, priming her to make broad connections in her research that others may not see.

On her trips to China, Wong also investigated venture capitalism’s broader impact on Chinese government. From speaking with local government officials and their business partners there, she noticed a parallel between how venture capitalism operates and how the modern Chinese government develops policies. In China, the central state has many strict mandates that all local governments must follow, but it also puts out more vaguely worded directives. Seeing the plethora of ways that local governments approach these directives, Wong believes they are “purposely” vague to allow local governments to test out different policies for the central state, which can then scale successful policies across the country. “This is very much a moonshot approach,” she says, with China diversifying its policies in the hopes that one or two local policies will succeed.

Wong notes that China has been approaching policy in this way long before venture capitalism took hold. But she has found that the new high-risk VC culture has “amplified pre-existing risk-tolerant tendencies in China’s policy landscape even further,” leading to “more eclectic [local policies] and more frequent crackdowns from the central government,” she says.

Furthermore, from speaking to people involved with local government policy, Wong has found that many justify the moonshot approach to policy by comparing it to machine learning for “extra scientific authority,” she says. In machine learning, absurd results are common and acceptable while a machine-learning system is being refined through trial-and-error. Referencing this concept, local policymakers have told Wong that they view interim eclectic policies as a byproduct of an approach to quickly converge on successful policies.

Wong is currently wrapping up her research and is excited to graduate soon. She plans to stay in academia, researching and teaching anthropology. “Now that I’ve trained as an anthropologist for so many years, I’m looking forward to jamming [with other anthropologists],” she says. “Not just following along, but genuinely taking part in the music-making.”

Illuminating the history and global story of antibiotics

Searching for multiplicity, in computer science and daily life