Searching for multiplicity, in computer science and daily life 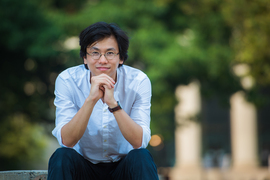 Ochigame’s freewheeling curiosity actually stems from a deep conviction about disrupting cultural assumptions — especially their own. “That’s something I’m trying to do with myself in everyday life. Whether it’s about reading literature or walking around new neighborhoods or attending research seminars in different disciplines, it’s a practice of intentionally unsettling yourself, of continually exposing yourself to divergent perspectives, so the ideas that are most familiar to you are disrupted,” they say.

In fact, Ochigame discovers many of the literary and musical works they are interested in through alternative search engines that they designed. For example, Search Atlas, a platform Ochigame developed in collaboration with computer scientist Katherine Ye, broadens a user’s search terms into a worldwide search for content. In so doing, the site reveals the geopolitical information boundaries embedded in conventional search engines like Google — boundaries that are invisible to most.

“Searching for multiplicity, for a plurality of intellectual traditions and for possibly marginalized perspectives, is the key principle behind the alternative search engines that I design. I want to expose people to ideas they wouldn’t find otherwise.” That principle permeates all aspects of Ochigame’s life.

Ochigame grew up in a family of Japanese immigrants in Mato Grosso do Sul, Brazil, a region close to Bolivia, Paraguay, and the Pantanal tropical wetland. They describe Mato Grosso as a highly “syncretic” environment, where many different cultures, languages, and beliefs interweave.

“It’s really a place of cultural and linguistic syncretism. My own family had a mix of Buddhism, Christianity, and atheism. And in the border region, you also grow up amid many other influences, not only Portuguese and Spanish but also Lebanese, Okinawan, Guarani, Kaiowá, Terena, Afro-Brazilian. From an early age, I suppose, I’ve always been very puzzled by the diversity of available ways of understanding the world.”

Just as the seeds of their epistemological bent were sown in their hometown, Ochigame’s blossoming interest in computer science took root on the streets of Mato Grosso. One day while out walking, at age 13, Ochigame happened upon some other kids playing with an educational robotics kit. Captivated by the activity, which was expensive and unavailable at school, Ochigame began to learn about programming and engineering on the internet, largely through free video lectures from MIT OpenCourseWare. They built robots from cheaper microcontrollers, sensors, and actuators, ultimately gaining national recognition in Brazilian robotics competitions. By college, Ochigame was committed to studying computer science.

But soon after arriving at the University of California at Berkeley, more philosophical questions began to sprout in Ochigame’s mind. They enrolled in courses in the humanities and social sciences, and came to question the dominance of Western epistemological frameworks in computer science. The classes inspired them to unmask the implicit assumptions embedded in the supposedly “universal” formal models that computer scientists rely on.

“Algorithms encode the cultural assumptions of their designers,” Ochigame explains. “Computer scientists tend to think of their formal models as universal, but I see those models as products of particular cultural assumptions, economic conditions, and historical contingencies. Because of a false impression of universality, the orthodox models are rarely questioned.”

Such dogmatism, according to Ochigame, marginalizes important ideas. For example, their historical research uncovered that after the Cuban Revolution in 1959, Cuban information scientists developed library systems that sought to give visibility to marginalized points of view — a principle Ochigame now employs in their alternative search engines.

When they considered graduate school, Ochigame sought a hybrid space where they could train in the humanities and think about computing from this different lens. The HASTS program at MIT has been a perfect fit. Under the guidance of Stefan Helmreich, the Elting E. Morison Professor of Anthropology, Ochigame’s graduate work has incorporated reading hundreds of books in anthropology, history, philosophy, and computer science, as well as traveling around the world to visit archives and conduct interviews with mathematicians, scientists, and engineers. The flexibility of the curriculum has allowed their ideas to mushroom.

“Even the most universalistic formal models of computation, like mathematical logic or Turing machines, encode particular cultural assumptions. I’m interested in how researchers from around the world have developed unorthodox models based on different assumptions. For example: nonclassical systems of logic from Brazil, nonbinary Turing machines from India, nonlinear electronic circuits from Japan, socialist frameworks of information science from Cuba. All over the world, people have imagined radically different ways of computing,” Ochigame says.

Beyond their research, Ochigame has found space at MIT to disrupt “universal” truths. As a teaching assistant for the popular course 21A.157 (The Meaning of Life), Ochigame led students in questioning cultural assumptions around topics like family, sex, and money. They also contributed to 6.036 (Introduction to Machine Learning), for which they co-designed the curriculum around ethical and social issues in computing and artificial intelligence.

“On the intellectual side of things, I couldn’t have asked for a better place than MIT,” Ochigame says. “It is, in fact, the only place I’ve ever felt a certain sense of belonging. The HASTS program is both supportive and transformative. My advisor is a model teacher who has incessantly disrupted my assumptions. I’ve had a wonderful time.” They add, “But, politically, I’m critical of the Institute. Going around multiple departments, I’ve become intimately aware of how funders shape research agendas. I’m worried by the Institute’s dependence on military and corporate sponsorship, because this dependence restricts the questions we ask.” For Ochigame, keeping a broad perspective should be not only a personal endeavor, but also a community and institutional one.

Reflecting that perspective, Ochigame’s living situation — cooperative housing in Cambridge, Massachusetts — comprises a multigenerational community of cultural and professional diversity. They enjoy the variety of guests that pass through, from street musicians to traveling monks, and can often be found chatting in the common areas and learning about those around them. Despite this plurality, the community is also one of shared values. “As a co-op, we make decisions democratically. We don’t have landlords. We strive to be a meeting place for diverse political struggles: prison abolition, queer and trans liberation, immigrant rights, and more,” they say.

Ochigame sees vast landscapes of perspectives where some may see neat gardens. But how does one see the forest through the trees?

“How do you make sense of multiplicity? It’s tempting to say that a single model of the world is the correct, rational, or scientifically valid one, while the others are not,” they say. “But another approach is to just take a step back and appreciate the variety of possible ways of making sense of the world out there.”