Building a bridge between neuroscience and immunology 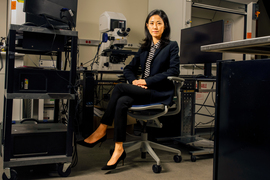 When Gloria Choi was making plans to launch her research lab at MIT, nearly 10 years ago, she thought it would be nice to find a side project where she could collaborate with her husband, an immunologist at Harvard Medical School.

The two scientists decided to look into a startling observation they had heard about as graduate students: A large study from Denmark showed that severe infections in pregnant women were correlated with a much higher risk of their children developing autism. Their work on this phenomenon, known as maternal immune activation, has since become a cornerstone of both of their research programs and yielded key insights into the mechanisms underlying this elevated risk.

Choi, the Mark Hyman Jr Career Development Associate Professor of Brain and Cognitive Sciences, who recently earned tenure at MIT, and her husband, Jun Huh, an associate professor of immunology at Harvard, have also shown that an immune molecule called IL-17a, which is produced by immune cells during a fever, can temporarily reduce some of the behavioral symptoms of autism.

Choi hopes that this line of research could one day lead to novel approaches to treating autism as well as depression or anxiety, using immunotherapy.

“Understanding the flow of information between the immune system and the nervous system can help us to understand why neurological conditions arise, and will help us to devise therapies that no one has thought about before. It will be a completely novel toolkit that we can use to think about treating neurological disorders,” says Choi, who is also a member of MIT’s Picower Institute for Learning and Memory.

Choi, who was born in South Korea and moved to Southern California with her family as a teenager, enjoyed both math and science in high school. As a nonnative speaker of English, she felt more comfortable in those disciplines than in the humanities.

“I love working with numbers because it just is very logical. If you add two plus two, it becomes four. There are no ambiguities,” she says.

At the University of California at Berkeley, she double majored in biology and business. After finishing her undergraduate degree, she went to Caltech, where she earned a PhD in biological sciences, working with David Anderson. Anderson, a stem cell biologist, was switching his lab’s focus to neuroscience, and Choi began working on one of the lab’s first neuroscience projects, studying circuits that control animals’ hardwired social behaviors.

As a postdoc at Columbia University, she continued her work in neuroscience with Nobel laureate Richard Axel, studying the neural circuits that link smells to specific memories.

While Choi was at Columbia, she and Huh also began their initial studies on maternal immune activation. Their work, which they expanded after starting their own labs at MIT and Harvard, has since revealed that IL-17 exposure during fetal development in mice leads to abnormalities in a brain region known as S1DZ, which is part of the somatosensory cortex.

These abnormalities lead to autism-like symptoms such as repetitive behavior and impaired sociability, which can be reversed by restoring normal activity in S1DZ. Choi is now trying to further explore how S1DZ, which is involved in proprioception — the sense of where one’s own body is in space — influences social behavior.

“Proprioception is really all about yourself, but why is that sensation so important when you’re interacting with others?” she says. “I think this is one of the hardest questions for our lab, but it’s something that we really have to answer because we discovered it and we feel responsible for understanding why.”

Choi has also expanded her research to explore other aspects of the interaction between the immune system and the nervous system. As part of her research on “sickness behavior,” she asks questions such as why do we sometimes feel anxious or depressed when we’re sick, and how does being sick influence our interactions with other people?

“When we have the flu or a cold, we experience all of these symptoms: we have a headache, we cannot think well, we are tired. We don’t want to go out, or hang out with friends,” Choi says. “For a long time, people thought this was just side effects of someone being fatigued, but now more and more people are figuring out that this is actually an active process of the immune system talking to the brain. And it makes sense — you don’t want to go out and socialize when you’re sick, and this definitely protects the community.”

She has uncovered evidence that some cytokines produced by the immune system can cross into the brain and activate receptors involved in controlling social behavior. She has also found that in mice, when males encounter a sick female, they will not try to mate with her, overriding their usual mating instinct. This behavior appears to be controlled by a circuit in the amygdala which detects distinctive odors from sick animals and triggers a warning signal to stay away.

Not a naturally adventurous person, Choi says that being at MIT has pushed her to explore riskier, nontraditional research questions.

“I have decided to go after a lot of risky things, which is sometimes not a wise thing to do,” Choi says. “I think being in this environment was able to awaken in me this fearlessness that helped me to go after not really safe questions, but rather something that was fundamentally important and biologically really interesting.”