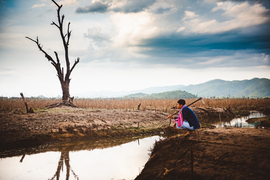 ↓ Download Image
Caption: Faculty from teams in the “Building equity and fairness into climate solutions” category share their thoughts on the need for inclusive solutions that prioritize disadvantaged, minority, and indigenous populations.
Credits: Image: iStockphoto

Caption:
Faculty from teams in the “Building equity and fairness into climate solutions” category share their thoughts on the need for inclusive solutions that prioritize disadvantaged, minority, and indigenous populations.
Credits:
Image: iStockphoto

Note: This is the first in a four-part interview series that will highlight the work of the Climate Grand Challenges finalists, ahead of the April announcement of several multiyear, flagship projects.

In a conversation prepared for MIT News, faculty from three of the teams in the competition’s “Building equity and fairness into climate solutions” category share their thoughts on the need for inclusive solutions that prioritize disadvantaged and vulnerable populations, and discuss how they are working to accelerate their research to achieve the greatest impact. The following responses have been edited for length and clarity.

Any effort to solve the most complex global climate problems must recognize the unequal burdens borne by different groups, communities, and societies — and should be equitable as well as effective. Janelle Knox-Hayes, associate professor in the Department of Urban Studies and Planning, leads a team that is developing processes and practices for equitable resilience, starting with a local pilot project in Boston over the next five years and extending to other cities and regions of the country. The Equitable Resilience Framework (ERF) is designed to create long-term economic, social, and environmental transformations by increasing the capacity of interconnected systems and communities to respond to a broad range of climate-related events.

Q: What is the problem you are trying to solve?

A: Inequity is one of the severe impacts of climate change and resonates in both mitigation and adaptation efforts. It is important for climate strategies to address challenges of inequity and, if possible, to design strategies that enhance justice, equity, and inclusion, while also enhancing the efficacy of mitigation and adaptation efforts. Our framework offers a blueprint for how communities, cities, and regions can begin to undertake this work.

Q: What are the most significant barriers that have impacted progress to date?

A: There is considerable inertia in policymaking. Climate change requires a rethinking, not only of directives but pathways and techniques of policymaking. This is an obstacle and part of the reason our project was designed to scale up from local pilot projects. Another consideration is that the private sector can be more adaptive and nimble in its adoption of creative techniques. Working with the MIT Climate and Sustainability Consortium there may be ways in which we could modify the ERF to help companies address similar internal adaptation and resilience challenges.

Deforestation and forest degradation of strategic ecosystems in the Amazon, Central Africa, and Southeast Asia continue to reduce capacity to capture and store carbon through natural systems and threaten even the most aggressive decarbonization plans. John Fernandez, professor in the Department of Architecture and director of the Environmental Solutions Initiative, reflects on his work with Daniela Rus, professor of electrical engineering and computer science and director of the Computer Science and Artificial Intelligence Laboratory, and Joann de Zegher, assistant professor of Operations Management at MIT Sloan, to protect tropical forests by deploying a three-part solution that integrates targeted technology breakthroughs, deep community engagement, and innovative bioeconomic opportunities.

Q: Why is the problem you seek to address a “grand challenge”?

A: We are trying to bring the latest technology to monitoring, assessing, and protecting tropical forests, as well as other carbon-rich and highly biodiverse ecosystems. This is a grand challenge because natural sinks around the world are threatening to release enormous quantities of stored carbon that could lead to runaway global warming. When combined with deep community engagement, particularly with indigenous and afro-descendant communities, this integrated approach promises to deliver substantially enhanced efficacy in conservation coupled to robust and sustainable local development.

Q: What is known about this problem and what questions remain unanswered?

A: Satellites, drones, and other technologies are acquiring more data about natural carbon sinks than ever before. The problem is well-described in certain locations such as the eastern Amazon, which has shifted from a net carbon sink to now a net positive carbon emitter. It is also well-known that indigenous peoples are the most effective stewards of the ecosystems that store the greatest amounts of carbon. One of the key questions that remains to be answered is determining the bioeconomy opportunities inherent within the natural wealth of tropical forests and other important ecosystems that are important to sustained protection and conservation.

Race, ethnicity, caste, religion, and nationality are often linked to vulnerability to the adverse effects of climate change, and if left unchecked, threaten to exacerbate long standing inequities. A team led by Evan Lieberman, professor of political science and director of the MIT Global Diversity Lab and MIT International Science and Technology Initiatives, Danielle Wood, assistant professor in the Program in Media Arts and Sciences and the Department of Aeronautics and Astronautics, and Siqi Zheng, professor of urban and real estate sustainability in the Center for Real Estate and the Department of Urban Studies and Planning, is seeking to  reduce ethnic and racial group-based disparities in the capacity of urban communities to adapt to the changing climate. Working with partners in nine coastal cities, they will measure the distribution of climate-related burdens and resiliency through satellites, a custom mobile app, and natural language processing of social media, to help design and test communication campaigns that provide accurate information about risks and remediation to impacted groups.

Q: How has this problem evolved?

A: Group-based disparities continue to intensify within and across countries, owing in part to some randomness in the location of adverse climate events, as well as deep legacies of unequal human development. In turn, economically and politically privileged groups routinely hoard resources for adaptation. In a few cases — notably the United States, Brazil, and with respect to climate-related migrancy, in South Asia — there has been a great deal of research documenting the extent of such disparities. However, we lack common metrics, and for the most part, such disparities are only understood where key actors have politicized the underlying problems. In much of the world, relatively vulnerable and excluded groups may not even be fully aware of the nature of the challenges they face or the resources they require.

Q: Who will benefit most from your research?

A: The greatest beneficiaries will be members of those vulnerable groups who lack the resources and infrastructure to withstand adverse climate shocks. We believe that it will be important to develop solutions such that relatively privileged groups do not perceive them as punitive or zero-sum, but rather as long-term solutions for collective benefit that are both sound and just.

Students dive into research with the MIT Climate and Sustainability Consortium

For campus “porosity hunters,” climate resilience is the goal