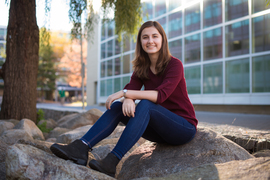 ↓ Download Image
Caption: “I feel that if my work does not attempt to engage with questions that the broader community is asking, then I have missed out,” Eliza Wells says.
Credits: Image: Gretchen Ertl 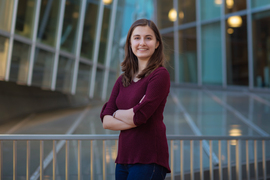 ↓ Download Image
Caption: It is much more important to me to pursue a life where I can engage with communities in exciting and fruitful ways than it is to continue racking up the academic accolades,” Wells says.
Credits: Image: Gretchen Ertl

Caption:
“I feel that if my work does not attempt to engage with questions that the broader community is asking, then I have missed out,” Eliza Wells says.
Credits:
Image: Gretchen Ertl

Caption:
It is much more important to me to pursue a life where I can engage with communities in exciting and fruitful ways than it is to continue racking up the academic accolades,” Wells says.
Credits:
Image: Gretchen Ertl

Eliza Wells wrestles with deep ethical questions that have implications well beyond her field. A fourth year student in MIT’s philosophy PhD program, Wells studies morality and facilitates discussions at the Institute about ethics and technology. “I believe that philosophy can change lives. I want to help people interrogate their values so that they can make their own lives and others’ better,” she says.

Her interest in philosophy research stems from her two core values. The first one is the intellectual stimulation that comes from asking philosophical questions, recognizing that she is uniquely privileged to be able to “think about the world and investigate the concepts that we are using to navigate that world.” Second, she values community engagement, which she channels into her interactions within Department of Linguistics and Philosophy, with the broader MIT community via the MIT Experiential Ethics Program, and with undergraduates as a teaching assistant for philosophy courses.

Finding “what you want in itself”

Wells describes herself as “having a classic philosopher origin story” — she participated in high school debate, which first piqued her interest in the field. She was also introduced to another form of debate, the “Ethics Bowl,” in which students are given complicated, real-life cases and asked to evaluate the different ethical options. However, despite her penchant for debate, when she set off for college at Stanford University, she intended to pursue a degree in computer science.

Her plan was short-lived. In her introductory philosophy classes, she continually circled back to a pressing ethical question: What should I do?  “I declared a major in philosophy, much to my parent’s dismay, as a computer science degree from Stanford would have been much more secure financially,” she recalls. As her time at college came to a close, she knew that she wanted to spend more time thinking carefully about philosophical questions, so graduate school seemed like a logical next step.

Nevertheless, the decision to pursue a doctorate was not one she took lightly. “When I was applying to graduate school, my undergraduate advisor said, ‘You can’t be doing this for instrumental reasons — because you want a particular job, or you think that this degree will make life easier in the future. The grad school experience has to be what you want in itself,’” she recalls.

Ultimately, what she wanted led her to the Institute. “MIT has many wonderful things going for it, one of which is that my partner is an engineer,” Wells says. “We were trying to find graduate schools that had good programs in both philosophy and engineering. MIT was one of the few schools that succeeded on that count. And it was helpful that we both got in,” she says with a laugh.

Bringing philosophy to the community

Wells speaks fondly of the philosophy program, noting that the tight-knit culture there is one of the chief reasons that she wanted to attend MIT. “People are really excited about engaging together in conversations about all different types of philosophy,” she says. However, in March 2020 — just six months into her PhD — these types of conversations suddenly became harder to have, as the Covid-19 pandemic forced people into isolation. In the past year, as campus life has resumed, she has played a critical role in rebuilding the department community, serving as the social chair and organizing several reading groups. “When we came back in-person, I realized that there was this whole dimension of what it means to be a philosopher that I was missing,” she says.

Wells also believes that it is critically important for philosophers to engage with students and faculty outside of the department. She says, “I feel that if my work does not attempt to engage with questions that the broader community is asking, then I have missed out.”

Her exposure to computer science as an undergraduate has served her well in integrating philosophy into the MIT education system. She has worked with several different technology ethics programs, including the Experiential Ethics course and Embedded EthiCS at Harvard University. After serving as a teacher for MIT’s Experiential Ethics program, she is now one of the directors. “I want to give students the chance to explore how even little software programming decisions have ethical dimensions that impact both themselves and the broader society,” she says.

Wells has also co-directed the Philosophy in an Inclusive Key Summer Institute, a weeklong summer program for undergraduates from underrepresented backgrounds. She notes that, historically, philosophy has not been a diverse field of study. “It’s been amazing to see these students so energized and empowered by the chance to ask these questions about the world and to do that in a supportive environment,” she says. “To have a hand in making the philosophical community more inclusive by creating that environment is something that is really meaningful to me.”

Wells’s belief in the importance of community engagement also extends to her work. “I want to ground my research questions in real-world experiences,” she says. “My dissertation examines the ways in which occupying different social roles, such as being a woman or a doctor, impacts both the ways that we behave and the ways that we decide what to do.” She also investigates how these social roles influence our moral responsibility for our actions.

Unlike many PhD students, Wells’s research does not necessarily have to be an extension of the work of her advisors, who are Sally Haslanger, the Ford Professor of Philosophy and Women’s and Gender Studies, and professor of philosophy Kieran Setiya. Although they provide regular feedback and guidance, she conducts most of her work alone. “This is a challenge in some ways because you have to be very self-confident and motivated. Other people can’t figure out what your question is for you,” she says. However, she notes that there are some advantages to this kind of independence. “It is also really stimulating because I have this incredible freedom to explore what is exciting to me.”

In addition to her research, Wells also serves as a teaching assistant for several undergraduate philosophy courses. “Teaching philosophy at MIT is different from teaching philosophy at other universities because many of the students we have are never going to take a philosophy class again,” she says. “You are engaged in this constant challenge of getting students excited about the material.” She admits that she was worried about this teaching challenge but has been pleasantly surprised by how engaged and enthusiastic the students have been in her classes.

These days, when Wells asks herself “What should I do?” she knows the answer. “I would like to stay in academia, because I love teaching and research. There is nowhere else where you can do philosophy in this way,” she says.

She also recognizes that her time as a PhD student has forced her to reconsider her values: “I have come to see during graduate school that the things that matter to me most are the relationships with the people I love. It is much more important to me to pursue a life where I can engage with communities in exciting and fruitful ways than it is to continue racking up the academic accolades.”

Facing reality, however painful it may be

3 Questions: Marion Boulicault and Milo Phillips-Brown on ethics in a technical curriculum

Philosophy in an inclusive key