For Danna Freedman, an impasse is an invitation 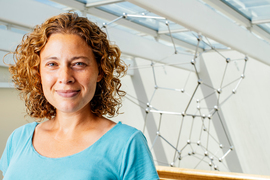 ↓ Download Image
Caption: MIT chemistry professor Danna Freedman designs qubits for quantum computation. “I love the most recent result, the thing I am struggling to understand and improve at a particular moment in time,” she says.
Credits: Photo: M. Scott Brauer 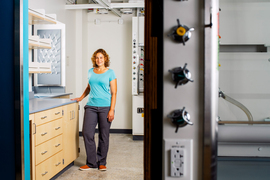 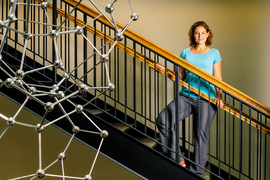 ↓ Download Image
Caption: “The visions of the scientists and engineers at MIT spur me to have better ideas and to be a better scientist,” Freedman says.
Credits: Photo: M. Scott Brauer

Caption:
MIT chemistry professor Danna Freedman designs qubits for quantum computation. “I love the most recent result, the thing I am struggling to understand and improve at a particular moment in time,” she says.
Credits:
Photo: M. Scott Brauer

Caption:
Freedman says her lab’s bottom-up design of molecules that can function as tunable, scalable, versatile, and robust qubits is an important step toward full realization of quantum sensing and communication.
Credits:
Photo: M. Scott Brauer

Caption:
“The visions of the scientists and engineers at MIT spur me to have better ideas and to be a better scientist,” Freedman says.
Credits:
Photo: M. Scott Brauer

Asked once about the most difficult part of her research, Danna Freedman could not stop referring to obstacles as opportunities, and to challenges as excitement. “Every time we hit a barrier it enables us to discover new science,” she told an interviewer at Northwestern University in 2017, describing difficulties encountered in her research as among her most “rewarding” moments.

For Freedman, MIT’s F.G. Keyes Professor of Chemistry, focusing on a difficult problem seems to be her idea of nirvana. Currently, her research group is using inorganic chemistry to create molecules for quantum information science, generating a new class of quantum units that can be readily tuned for quantum communication. But at any given time, her idea of a favorite breakthrough is generally the challenge at hand.

“I love the most recent result, the thing I am struggling to understand and improve at a particular moment in time,” Freedman says.

Her determination and enthusiasm for the unsolved problem began as she was growing up in a small town in upstate New York, where early on she showed a strong interest in science and the questions scientists work to answer.

Freedman says her parents “patiently participated in hours of conversation about the best way to drop an egg an arbitrary number of stories without breaking it.”

“Unfortunately, I hear bungee egg drop is no longer a Science Olympiad event,” she jokes.

Referring to her more recent endeavors, Freedman says her lab’s bottom-up design of molecules that can function as tunable, scalable, versatile, and robust qubits is an important step toward full realization of quantum sensing and communication. Such quantum operations could uncover new information about the world around us, sense dark matter, lead to insight in biological systems, or help transmit information across complex messy interfaces in a quantum state.

“We have developed a different approach to such a goal,” Freedman says. “It will take a long, dedicated, interdisciplinary effort to bring these ideas to fruition, and I am incredibly excited to make that happen.”

One of the ways Freedman and her lab are working collaboratively across disciplines is through the Q-NEXT National Quantum Information Science Research Center, which is led by the U.S. Department of Energy’s Argonne National Laboratory. With support from Q-NEXT and others, Freedman and members of her team as well as researchers from the University of Chicago and Columbia University recently published a paper in the Journal of the American Chemical Society demonstrating that a specific group of qubits — in this case molecules designed with a central chromium atom surrounded by four hydrocarbon molecules — could be customized for specific targets within quantum sensing and communication.

“As part of Q-NEXT and other research centers, we are incorporating these molecules into the larger quantum ecosystem,” says Freedman, whose work has garnered her many honors, including Presidential Early Career Awards for Scientists and Engineers through the U.S. Department of Defense and the National Science Foundation.

Freedman’s lab also works on applying extreme pressure, sometimes comparable to the pressures at the Earth’s core, to synthesize new materials. Her team is exploring one such material, the first iron-bismuth binary compound, for its magnetic properties and potential as a superconductor, both aspects that could have broad ramifications in such areas as energy generation and transport.

Freedman’s characteristic ambition also shines through in her teaching and mentoring. She says that helping young researchers to develop involves “providing them with a foundation to excel and then throwing them into the deep end and asking them to swim.” But if they don’t succeed, she says, then “the foundation isn’t there, and I need to work harder, and try different approaches to prepare them.”

With her determination to seek new and expanding challenges, Freedman came to MIT in 2021, having moved from Northwestern University, where she was a professor of chemistry. She says the potential for collaboration at MIT enhanced her motivation.

“I am about 10 years into my career, and as our research expands in new directions, I wanted to form teams that extend beyond my own research and to connect in different directions,” Freedman says. “When I spoke with faculty at MIT, every idea that I had expanded and became more achievable. The visions of the scientists and engineers at MIT spur me to have better ideas and to be a better scientist.”

She says she is “invigorated by the culture of the Institute. I continue to be impressed with the kindness and dedication and equitable culture that I have observed here. It is incumbent upon me to continue to improve it, but it is a phenomenal starting point.”

And from that starting point, proceeding despite obstacles is obvious. Her great forward momentum is perhaps also evidenced by her great love of walking and running, which she tries to do every day.