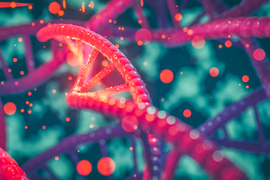 The liver’s ability to regenerate itself is legendary. Even if more than 70 percent of the organ is removed, the remaining tissue can regrow an entire new liver.

Kristin Knouse, an MIT assistant professor of biology, wants to find out how the liver is able to achieve this kind of regeneration, in hopes of learning how to induce other organs to do the same thing. To that end, her lab has developed a new way to perform genome-wide studies of the liver in mice, using the gene-editing system CRISPR.

With this new technique, researchers can study how each of the genes in the mouse genome affects a particular disease or behavior. In a paper describing the technique, the researchers uncovered several genes important for liver cell survival and proliferation that had not been seen before in studies of cells grown in a lab dish.

“If we really want to understand mammalian physiology and disease, we should study these processes in the living organism wherever possible, as that’s where we can investigate the biology in its most native context,” says Knouse, who is also a member of MIT’s Koch Institute for Integrative Cancer Research.

Knouse is the senior author of the new paper, which appears today in Cell Genomics. Heather Keys, director of the Functional Genomics Platform at the Whitehead Institute, is a co-author on the study.

As a graduate student at MIT, Knouse used regenerating liver tissue as a model to study an aspect of cell division called chromosome segregation. During this study, she observed that cells dividing in the liver did not behave the same way as liver cells dividing in a lab dish.

“What I internalized from that research was the extent to which something as intrinsic to the cell as cell division, something we have long assumed to be independent of anything beyond the cell, is clearly influenced by the extracellular environment,” she says. “When we study cells in culture, we lose the impact of that extracellular context.”

However, many types of studies, including genome-wide screens that use technologies such as CRISPR, are more difficult to deploy at the scale of an entire organism. The CRISPR gene-editing system consists of an enzyme called Cas9 that cuts DNA in a given location, directed by a strand of RNA called a guide RNA. This allows researchers to knock out one gene per cell, in a huge population of cells.

While this approach can reveal genes and proteins involved in specific cellular processes, it has proven difficult to deliver CRISPR components efficiently to enough cells in the body to make it useful for animal studies. In some studies, researchers have used CRISPR to knock out about 100 genes of interest, which is useful if they know which genes they want to study, but this limited approach doesn’t reveal new genes linked to a particular function or disease.

A few research groups have used CRISPR to do genome-wide screens in the brain and in skin cells, but these studies required large numbers of mice to uncover significant hits.

“For us, and I think many other researchers, the limited experimental tractability of mouse models has long hindered our capacity to dive into questions of mammalian physiology and disease in an unbiased and comprehensive manner,” Knouse says. “That’s what I really wanted to change, to bring the experimental tractability that was once restricted to cell culture into the organism, so that we are no longer limited in our ability to explore fundamental principles of physiology and disease in their native context.”

To get guide RNA strands into hepatocytes, the predominant cell type in the liver, Knouse decided to use lentivirus, an engineered nonpathogenic virus that is commonly used to insert genetic material into the genome of cells. She injected the guide RNAs into newborn mice, such that once the guide RNA was integrated into the genome, it would be passed on to future generations of liver cells as the mice grew. After months of effort in the lab, she was able to get guide RNAs consistently expressed in tens of millions of hepatocytes, which is enough to do a genome-wide screen in just a single animal.

To test the system, the researchers decided to look for genes that influence hepatocyte fitness — the ability of hepatocytes to survive and proliferate. To do that, they delivered a library of more than 70,000 guide RNAs, targeting more than 13,000 genes, and then determined the effect of each knockout on cell fitness.

The mice used for the study were engineered so that Cas9 can be turned on at any point in their lifetime. Using a group of four mice — two male and two female — the researchers turned on expression of Cas9 when the mice were five days old. Three weeks later, the researchers screened their liver cells and measured how much of each guide RNA was present. If a particular guide RNA is abundant, that means the gene it targets can be knocked out without fatally damaging the cells. If a guide RNA doesn’t show up in the screen, it means that knocking out that gene was fatal to the cells.

This screen yielded hundreds of genes linked to hepatocyte fitness, and the results were very consistent across the four mice. The researchers also compared the genes they identified to genes that have been linked to human liver disease. They found that genes mutated in neonatal liver failure syndromes also caused hepatocyte death in their screen.

The screen also revealed critical fitness genes that had not been identified in studies of liver cells grown in a lab dish. Many of these genes are involved in interactions with immune cells or with molecules in the extracellular matrix that surrounds cells. These pathways likely did not turn up in screens done in cultured cells because they involve cellular interactions with their external environment, Knouse says.

By comparing the results from the male and female mice, the researchers also identified several genes that had sex-specific effects on fitness, which would not have been possible to pick up by studying cells alone.

Knouse now plans to use this system to identify genes that are critical for liver regeneration.

“Many tissues such as the heart are unable to regenerate because they lack stem cells and the differentiated cells are unable to divide. However, the liver is also a highly differentiated tissue that lacks stem cells, yet it retains this amazing capacity to regenerate itself after injury,” she says. “Importantly, the genome of the liver cells is no different from the genome of the heart cells. All of these cells have the same instruction manual in their nucleus, but the liver cells are clearly reading different sentences in this manual in order to regenerate. What we don’t know is, what are those sentences? What are those genes? If we can identify those genes, perhaps someday we can instruct the heart to regenerate.”

This new screening technique could also be used to study conditions such as fatty liver disease and cirrhosis. Knouse’s lab is also working on expanding this approach to organs other than the liver.

“We need to find ways to get guide RNAs into other tissues at high efficiency,” she says. “In overcoming that technical barrier, then we can establish the same experimental tractability that we now have in the liver in the heart or other issues.”

The research was funded by the National Institutes of Health NIH Director’s Early Independence Award, the Koch Institute Support (core) Grant from the National Cancer Institute, and the Scott Cook and Signe Ostby Fund.