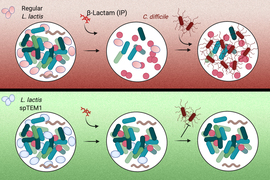 ↓ Download Image
Caption: MIT researchers engineered a strain of bacteria, noted as L. lactis spTEM1 in the image, that can help protect the natural flora of the human digestive tract from antibiotics and prevent opportunistic infections such as C. difficile from developing.
Credits: Image: Courtesy of the researchers, edited by MIT News

Caption:
MIT researchers engineered a strain of bacteria, noted as L. lactis spTEM1 in the image, that can help protect the natural flora of the human digestive tract from antibiotics and prevent opportunistic infections such as C. difficile from developing.
Credits:
Image: Courtesy of the researchers, edited by MIT News

Antibiotics are life-saving drugs, but they can also harm the beneficial microbes that live in the human gut. Following antibiotic treatment, some patients are at risk of developing inflammation or opportunistic infections such as Clostridiodes difficile. Indiscriminate use of antibiotics on gut microbes can also contribute to the spread of resistance to the drugs.

In an effort to reduce those risks, MIT engineers have developed a new way to help protect the natural flora of the human digestive tract. They took a strain of bacteria that is safe for human consumption and engineered it to safely produce an enzyme that breaks down a class of antibiotics called beta-lactams. These include ampicillin, amoxicillin, and other commonly used drugs.

When this “living biotherapeutic” is given along with antibiotics, it protects the microbiota in the gut but allows the levels of antibiotics circulating in the bloodstream to remain high, the researchers found in a study of mice.

Over the past two decades, research has revealed that the microbes in the human gut play important roles in not only metabolism but also immune function and nervous system function.

“Throughout your life, these gut microbes assemble into a highly diverse community that accomplishes important functions in your body,” Cubillos-Ruiz says. “The problem comes when interventions such as medications or particular kinds of diets affect the composition of the microbiota and create an altered state, called dysbiosis. Some microbial groups disappear, and the metabolic activity of others increases. This unbalance can lead to various health issues.”

One major complication that can occur is infection of C. difficile, a microbe that commonly lives in the gut but doesn’t usually cause harm. When antibiotics kill off the strains that compete with C. difficile, however, these bacteria can take over and cause diarrhea and colitis. C. difficile infects about 500,000 people every year in the United States, and causes around 15,000 deaths.

Doctors sometimes prescribe probiotics (mixtures of beneficial bacteria) to people taking antibiotics, but those probiotics are usually also susceptible to antibiotics, and they don’t fully replicate the native microbiota found in the gut.

To protect the microbiota from antibiotics, the researchers decided to use modified bacteria. They engineered a strain of bacteria called Lactococcus lactis, which is normally used in cheese production, to deliver an enzyme that breaks down beta-lactam antibiotics. These drugs make up about 60 percent of the antibiotics prescribed in the United States.

When these bacteria are delivered orally, they transiently populate the intestines, where they secrete the enzyme, which is called beta-lactamase. This enzyme then breaks down antibiotics that reach the intestinal tract. When antibiotics are given orally, the drugs enter the bloodstream primarily from the stomach, so the drugs can still circulate in the body at high levels. This approach could also be used along with antibiotics that are injected, which also end up reaching the intestine. After their job is finished, the engineered bacteria are excreted through the digestive tract.

Using engineered bacteria that degrade antibiotics poses unique safety requirements: Beta-lactamase enzymes confer antibiotic resistance to harboring cells and their genes can readily spread between different bacteria. To address this, the researchers used a synthetic biology approach to recode the way the bacterium synthetizes the enzyme. They broke up the gene for beta-lactamase into two pieces, each of which encodes a fragment of the enzyme. These gene segments are located on different pieces of DNA, making it very unlikely that both gene segments would be transferred to another bacterial cell.

These beta-lactamase fragments are exported outside the cell where they reassemble, restoring the enzymatic function. Since the beta-lactamase is now free to diffuse in the surrounding environment, its activity becomes a “public good” for the gut bacterial communities. This prevents the engineered cells from gaining an advantage over the native gut microbes.

“Our biocontainment strategy enables the delivery of antibiotic-degrading enzymes to the gut without the risk of horizontal gene transfer to other bacteria or the acquisition of an added competitive advantage by the live biotherapeutic,” Cubillos-Ruiz says.

“This is a strong demonstration that this approach can protect the gut microbiota, while preserving the efficacy of the antibiotic, as you're not modifying the levels in the bloodstream,” Cubillos-Ruiz says.

The researchers now plan to begin developing a version of the treatment that could be tested in people at high risk of developing acute diseases that stem from antibiotic-induced gut dysbiosis, and they hope that eventually, it could be used to protect anyone who needs to take antibiotics for infections outside the gut.

“If the antibiotic action is not needed in the gut, then you need to protect the microbiota. This is similar to when you get an X-ray, you wear a lead apron to protect the rest of your body from the ionizing radiation,” Cubillos-Ruiz says. “No previous intervention could offer this level of protection. With our new technology we can make antibiotics safer by preserving beneficial gut microbes and by reducing the chances of emergence of new antibiotic resistant variants.”

Paper: “An engineered live biotherapeutic for the prevention of antibiotic-induced dysbiosis”