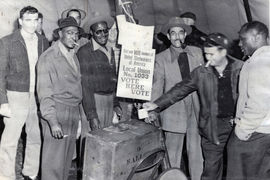 ↓ Download Image
Caption: “Workers vote in an election for Local 1033 of the United Steelworkers of America. The local emerged after the 1937 Memorial Day Massacre in Chicago, when 10 steelworkers striking for union recognition were killed.
Credits: Photo: courtesy of the Southeast Chicago Historical Society Digital Archive.

Caption:
Workers vote in an election for Local 1033 of the United Steelworkers of America. The local emerged after the 1937 Memorial Day Massacre in Chicago, when 10 steelworkers striking for union recognition were killed.
Credits:
Photo: courtesy of the Southeast Chicago Historical Society Digital Archive

The steel industry in the U.S. shrank dramatically in the 1970s and 1980s, with profound effects on the country’s industrial workforce. Suddenly, blue-collar workers who had spent their careers in the mills — often as part of multigenerational steelworking families — found themselves unable to earn a living as communities around them suffered and people lost the middle-class lives they had been fashioning. That process was chronicled in MIT anthropologist Christine Walley’s 2013 book “Exit Zero,” a case study of her own father’s travails as a southeast Chicago steelworker whose employer shut its mill in 1980. Walley’s husband, Chris Boebel, a filmmaker by training and media development director for MIT Open Learning, directed a documentary by the same name.

Now Walley and Boebel have teamed up on a related effort, the Southeast Chicago Archive and Storytelling Project, which explores working life and deindustrialization more broadly. Using video, photos, text, and museum artifacts, the site chronicles key events in labor history, and the multiethnic social milieu of blue-collar workers, to open a new window into America’s industrial heyday. The site is a collaboration between an MIT team and the Southeast Chicago Historical Museum; Walley and Boebel worked extensively with Jeff Soyk, a media artist who served as the project’s creative director, and Rod Sellers, volunteer director at the museum. The site officially launched on Sept. 6, Labor Day. MIT News spoke with Walley and Boebel about the new project.

Q: The downsizing of the steel industry was a huge jolt to blue-collar workers in the U.S. — and deindustrialization has been an important part of the U.S. landscape in recent decades, as you examined in the book and film “Exit Zero.” How does the Southeast Chicago Archive and Storytelling Project relate to your previous work?

Walley: When I was working on the book and when Chris and I were working on the film, we used the materials from the museum on those projects. It’s an amazing space in this fieldhouse that’s crammed to the rafters. We think of it as the attic of Southeast Chicago.

The idea was to use the objects people saved and the stories they told, as a way to get at these larger historical questions about this working-class community and capture the diversity and richness of Southeast Chicago. We would pick what [MIT Professor] Sherry Turkle calls an evocative object, which has a lot of emotion and meaning for people, and used that to start. Chris shot video showing people now interacting with those objects.

Boebel: When Chris [Walley] started writing the book, and we were making the film, one of the key goals was to take her family history and tie it to these larger social forces and historical events — the changing economy, deindustrialization. The limitation is that there are things you can’t necessarily access through one family’s experiences. The history of race and ethnicity and immigration is much harder to access if you’re talking about one white working-class family living on the Southeast Side. We were looking for a way to use that same approach but broaden the perspective.

Q: The site features multimedia “storylines,” which are practically short documentaries in their own right. One is about Southeast Chicago’s “Memorial Day Massacre” of 1937, when 10 striking steelworkers were killed by police; another is about the area’s Mexican-American population. You say you will add new ones as well. Why did you choose those topics, to start?

Walley: The Memorial Day Massacre came out of a steel strike in the 1930s, when steelworkers were fighting for the right to unionize. The violence of that event captured the national imagination, so it was a real turning point. The aftermath led to a shift in public opinion around the place of unions. Long term, the steel unions were recognized right at the beginning of World War II, and [mill positions] became middle class jobs, until the steel mills started to close [around 1980]. It is a very intense storyline, and very violent. It suggests the incredible bravery of that generation, to get unionized labor and middle-class livelihoods. And since we’re living in a moment when work is incredibly precarious again, it’s instructive to look at what prior generations did to push for good jobs and an expanding middle class in the United States.

Boebel: There were other events like the Memorial Day Massacre, with violence and killing, but this one caught the public’s imagination [because] it was filmed.  And it was so far as I know the first time that had happened. There were other instances where workers were fired upon and killed or beaten, but people would say, “the strikers were rioting, we were defending ourselves.” That happened here, too: The police said there was a riot — and then the newsreel footage was shown. So, there was kind of a national reckoning, [including] a commission appointed by Congress.

The storyline [about Mexican-Americans] encompasses the experience of thousands of immigrants, [including] men from the Mexican parish in the neighborhood who died in the Vietnam War. More men lost their lives from that parish than any other parish in the country, so that gives you an idea of the sacrifice and incredible pain that community experienced during Vietnam. It’s also a window into the idea of being an American, and deals with ethnic conflict and racism at the same time those sacrifices were being made.

Walley: In recent years there’s been this resignifying of the working class in this country as the white working class, but if you look historically, the working class has always been incredibly diverse. Southeast Chicago [had immigrants] from different parts of Europe, but also Mexican immigrants and African-American migrants starting around World War I. Those who worked at factory jobs came from very different backgrounds — there was a great deal of conflict as well as periods of unified action, so we’re trying to capture it all.

Q: This project has rich visual media, detailed descriptions of artifacts from the museum, and these “storylines” as well. Why did you decide to create the archive this way?

Walley: There are a lot of amazing online archives these days, but sometimes you’ll see objects and get detailed metadata on them without really knowing who donated these items and what their significance was for the people who saved them. We tried to make the website friendly for people who might not know anything about industrial history. We have featured curations in the archive, and you can toggle back and forth between the storylines and the archive, so you can check out an object in depth, then go back [to the storyline]. We were trying to do a different kind of online archive by creating these entryways for audiences and building on the documentary format. … There is also a study guide for school students.

Boebel: One of the things that I’m always interested by, in museums, is when you see incredible objects displayed in a very clean, sterile way, with one card that gives you a little context. It allows you to appreciate the aesthetic quality of a vase or picture, but I’m always really, really curious about the story around it. With online archives, you can’t hold an object in your hand, you can’t get close to it, you can’t bask in its presence, but you can much more easily bring in all of that context. Our project is an attempt to do that.