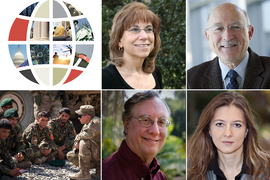 After nearly 20 years, the U.S. has withdrawn its troops from Afghanistan, and the Taliban has regained control over the country. In light of those developments, a panel of foreign-policy experts on Tuesday addressed two separate but related questions: Why did the U.S. military action in Afghanistan fall short, and what comes next for the strife-ridden country?

The event occurred as observers are still digesting the rapid collapse of the U.S.-backed national government in Afghanistan, which could not maintain power as the U.S. undertook its military withdrawal.

“Even I didn’t think they would go down in 10 days,” said Vanda Felbab-Brown PhD ’07, a senior fellow at the Brookings Institution’s Center for Security, Strategy, and Technology.

The virtual event, “U.S., Afghanistan, 9/11: Finished or Unfinished Business?” was the latest in the Starr Forum series held by MIT’s Center for International Studies, which examines key foreign-policy and international issues. Barry Posen, the Ford International Professor of Political Science at MIT, moderated the event.

As to why the U.S. could not help build a more solid state in Afghanistan given 20 years, the panelists offered multiple answers.

Juan Cole, a professor of history at University of Michigan who specializes in the Middle East, suggested that large-scale military ambitions in Afghanistan constituted a case of strategic overreach. The Taliban controlled much of Afghanistan from 1996 to 2001, providing a haven for the Al Qaeda terrorist group that carried out the Sept. 11, 2001 attacks on the U.S. But any military activities beyond those aimed at dismantling Al Qaeda, he stated, were likely to be quixotic.

“The initial U.S. attack on Afghanistan could be justified,” Cole said. “Al Qaeda had training camps there which were used to plot out 9/11, and so destroying those camps, making sure they couldn’t continue to operate, was a legitimate military mission.”

However, Cole proposed, “occupying an entire country of millions of people, and a difficult country to run and occupy” was “foredoomed to fail.” The U.S. inevitably worked more closely with some ethnic groups and not others; local elites siphoned off foreign aid; and some militarized factions who had been aligned with the U.S. reacted strongly against seeing foreign troops in the country. All this meant U.S. expectations were soon “met with reality on the ground,” Cole said.

Felbab-Brown emphasized two long-running factors that helped undermine U.S. efforts to build a new Afghan state. For one thing, she noted, neither the U.S. nor any other country could reorient neighboring Pakistan away from its decades-long alignment with the Taliban.

“Essentially, the United States never resolved how to dissuade Pakistan from providing multifaceted support for the Taliban, down to the last days of July and August … and throughout the entire 20 years, the material support, safe havens, and all kinds of other support,” she said.

Secondly, in a country where 40 to 50 percent of income in the last two decades has come from foreign aid, Felhab-Brown noted, the U.S. and its allies were not able to determine “how to persude local governing elites to moderate their role” and create more satisfactory habits of local administration.

All that said, Felbab-Brown pointed to positive consequences of U.S. efforts in Afghanistan over the last 20 years, including economic benefits and educational gains for women in particular.

“There is still a big difference between the poverty of today [in Afghanistan] and the mass starvation and huge degradation of civil and human rights that was the case in the 1990s,” Felhab-Brown said.

So, where is Afghanistan headed, assuming the Taliban consolidate control over most or all of the country?

“The worst outcome is rule that over time will come to look like the 1990s,” Felhab-Brown said, referring to the highly repressive Taliban policies that provided virtually no rights for women and massive restrictions on cultural activity.

Alternately, Felhab-Brown suggested, “The best outcome is an Iran-like system, with both the political structures of Iran … and a set of political freedoms where women can have education, can have jobs, can leave a house without a guardian, a crucial condition.” That would still represent a restrictive state by Western standards, and as Felhab-Brown suggested, it is also possible that the Taliban will settle on a more restrictive set of policies.

The international-relations repercussions of a Taliban-controlled Afghanistan remain uncertain as well, noted Carol Saivetz, a senior advisor and Russia specialist with the MIT Security Studies Program. She observed that while some in Russia might take satisfaction in watching the U.S. struggle while departing Afghanistan, Russia itself has long-running concerns about the spread of radical Islamic groups in its sphere of influence.

“I think that it’s a short-term gain … that longer-term I think could be very problematic for the Russians,” Saivetz said. “I think they are really scared of any kind of threat of Islamist terrorism overtaking Russia again.”

Saivetz also observed that the Soviet invasion and occupation of Afghanistan, which lasted from 1979 to 1989, indicated the difficulties of trying to transform the country, especially in its rural settings.

“The Soviet experience in Afghanistan was really very similar to ours,” Saivetz said.

In his concluding thoughts, Posen called the winding up of the U.S. military presence “a tragic chapter in a 20-year book” and noted that with so much of the Afghanistan economy having consisted of foreign aid programs now seemingly about to end, outside countries still have difficult decisions to make about what sort of relationship they might pursue with the country’s new leaders.

“The West has a lot of deep ethical choices to make here, about its relationship, not just with the Taliban, but the Afghan people,” Posen said.