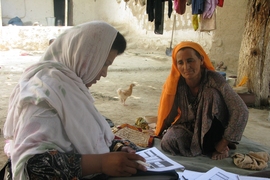 ↓ Download Image
Caption: A woman in rural Afghanistan answers questions about the effects of the country&#39;s National Solidarity Program.

Caption:
A woman in rural Afghanistan answers questions about the effects of the country&#39;s National Solidarity Program.

Credits:
Photo: Fotini Christia
In recent decades, Afghanistan has been a notoriously difficult place for women to participate in civic matters. But a new study co-authored by an MIT political scientist, which assessed Afghanistan’s largest development aid program through a novel field experiment in about 500 villages, shows that women can participate constructively in political decision-making in rural Afghanistan — and realize other civic and economic benefits as a result.

The experiment, conducted over four years, assessed the impact of a community-driven program run by the Afghan government. The program required participating villages to have gender equality in their jirga or shura, local councils that typically oversee public goods and disputes, and mandated that women also vote in elections for these offices.

“Afghanistan, given its years of violent conflict and political unrest, is a very unlikely place to see results from development aid — even more so for women’s issues, given the society’s strong tribal and customary structures,” says Fotini Christia, an associate professor of political science at MIT and co-author of a new paper on the study.

“It was therefore quite remarkable to find that a community-driven development program, mandating the creation of elected, gender-balanced councils, leads to an increase in women’s involvement in the community overall, as well as in income generation, mobility and broader socialization,” Christia adds.

The paper, “Empowering Women through Development Aid,” is being published in the August issue of the American Political Science Review. Along with Christia, the paper’s co-authors are Andrew Beath, an economist at the World Bank, and Ruben Enikolopov, an assistant professor at the New Economic School in Moscow.

Toward equality in voting

The researchers evaluated the Afghan government’s National Solidarity Programme (NSP), which aims to foster rural development, more representative government, and better services and infrastructure. The program is funded by the World Bank and other sponsors, and is run by the Afghan Ministry of Rural Rehabilitation and Development.

Various NSP projects have been developed in more than 30,000 villages. Some 500 villages that were part of the researchers’ evaluation were spread throughout 10 administrative districts, intended to represent Afghanistan’s ethnic diversity: Five are predominantly Tajik districts, four are largely Pashtun, one is predominantly Hazara, and two have significant Uzbek and Turkmen populations.

The program started in 2003; the results described in the paper come from a study of the project’s second phase, carried out from 2007 through 2011. To generate their results, Christia and her colleagues collected survey data gathered from more than 13,000 male and female respondents from the villages in question, which measured both tangible changes in political practices and attitudes about gender.

All told, the project “speaks to the broader role of the effects of development aid on women’s issues, particularly in other places that have rigid social and traditional structures,” Christia says. “If community-driven development can have a positive effect on women’s lives in rural Afghanistan, it could be something to consider in several other places that are challenging for women.”

At least one thing did not change in the participating villages: Important household decisions remained very much the domain of men, and attitudes about such family roles did not budge.

“We find no such effects on women’s role in the family core, but those would be harder to change and would require a lot more time,” Christia says.

But are these changes durable?

Other scholars say the study both contains valuable findings, and suggests the need for further research on the effects of such development interventions.

“This line of research is extremely fruitful,” says Donald P. Green, a political scientist at Columbia University, who has read the study and calls it an “unusually ambitious field experiment in a part of the world everyone’s interested in.” Still, as Green notes, it remains an open question whether these types of development aid projects can transform government practices over extended periods of time: “One of the next steps is to look at institutions,” he says, with an eye to seeing how those governing norms may or may not change.

Certainly any civic gains would seem to be significant in a country where only 11 percent of nonelite female villagers attend religious school, 3 percent attend secular school, and the average number of years of education, for women who have attended school at all, is only three years.

But as Christia acknowledges, it is an open question whether the gains women realized in the Afghan experiment are long-lasting or will evaporate once the funding for the programs ceases.

“It would be great to see how lasting these effects are, that is, to see if interventions that last for longer have stronger or more durable effects,” Christia says. “The general question is therefore one of sustainability.”

The study was supported by, among other groups, the Food and Agriculture Organization of the United Nations, the World Bank, and the NSP.