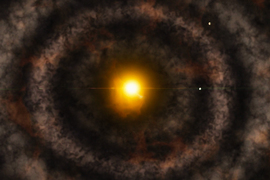 In the early solar system, a “protoplanetary disk” of dust and gas rotated around the sun and eventually coalesced into the planets we know today.

A new analysis of ancient meteorites by scientists at MIT and elsewhere suggests that a mysterious gap existed within this disk around 4.567 billion years ago, near the location where the asteroid belt resides today.

“Over the last decade, observations have shown that cavities, gaps, and rings are common in disks around other young stars,” says Benjamin Weiss, professor of planetary sciences in MIT’s Department of Earth, Atmospheric and Planetary Sciences (EAPS). “These are important but poorly understood signatures of the physical processes by which gas and dust transform into the young sun and planets.”

Likewise the cause of such a gap in our own solar system remains a mystery. One possibility is that Jupiter may have been an influence. As the gas giant took shape, its immense gravitational pull could have pushed gas and dust toward the outskirts, leaving behind a gap in the developing disk.

Another explanation may have to do with winds emerging from the surface of the disk. Early planetary systems are governed by strong magnetic fields. When these fields interact with a rotating disk of gas and dust, they can produce winds powerful enough to blow material out, leaving behind a gap in the disk.

Regardless of its origins, a gap in the early solar system likely served as a cosmic boundary, keeping material on either side of it from interacting. This physical separation could have shaped the composition of the solar system’s planets. For instance, on the inner side of the gap, gas and dust coalesced as terrestrial planets, including the Earth and Mars, while gas and dust relegated to the farther side of the gap formed in icier regions, as Jupiter and its neighboring gas giants.

“It’s pretty hard to cross this gap, and a planet would need a lot of external torque and momentum,” says lead author and EAPS graduate student Cauê Borlina. “So, this provides evidence that the formation of our planets was restricted to specific regions in the early solar system.”

A split in space

Over the last decade, scientists have observed a curious split in the composition of meteorites that have made their way to Earth. These space rocks originally formed at different times and locations as the solar system was taking shape. Those that have been analyzed exhibit one of two isotope combinations. Rarely have meteorites been found to exhibit both — a conundrum known as the “isotopic dichotomy.”

Scientists have proposed that this dichotomy may be the result of a gap in the early solar system’s disk, but such a gap has not been directly confirmed.

Weiss’ group analyzes meteorites for signs of ancient magnetic fields. As a young planetary system takes shape, it carries with it a magnetic field, the strength and direction of which can change depending on various processes within the evolving disk. As ancient dust gathered into grains known as chondrules, electrons within chondrules aligned with the magnetic field in which they formed.

Chondrules can be smaller than the diameter of a human hair, and are found in meteorites today. Weiss’ group specializes in measuring chondrules to identify the ancient magnetic fields in which they originally formed.

In previous work, the group analyzed samples from one of the two isotopic groups of meteorites, known as the noncarbonaceous meteorites. These rocks are thought to have originated in a “reservoir,” or region of the early solar system, relatively close to the sun. Weiss’ group previously identified the ancient magnetic field in samples from this close-in region.

In their new study, the researchers wondered whether the magnetic field would be the same in the second isotopic, “carbonaceous” group of meteorites, which, judging from their isotopic composition, are thought to have originated farther out in the solar system.

They analyzed chondrules, each measuring about 100 microns, from two carbonaceous meteorites that were discovered in Antarctica. Using the superconducting quantum interference device, or SQUID, a high-precision microscope in Weiss’ lab, the team determined each chondrule’s original, ancient magnetic field.

Surprisingly, they found that their field strength was stronger than that of the closer-in noncarbonaceous meteorites they previously measured. As young planetary systems are taking shape, scientists expect that the strength of the magnetic field should decay with distance from the sun.

A planetary system’s magnetic field is a measure of its accretion rate, or the amount of gas and dust it can draw into its center over time. Based on the carbonaceous chondrules’ magnetic field, the solar system’s outer region must have been accreting much more mass than the inner region.

Using models to simulate various scenarios, the team concluded that the most likely explanation for the mismatch in accretion rates is the existence of a gap between the inner and outer regions, which could have reduced the amount of gas and dust flowing toward the sun from the outer regions.

“Gaps are common in protoplanetary systems, and we now show that we had one in our own solar system,” Borlina says. “This gives the answer to this weird dichotomy we see in meteorites, and provides evidence that gaps affect the composition of planets.”

This research was supported, in part, by NASA, and the National Science Foundation.