The existence of a magnetic field beyond 3.5 billion years ago is still up for debate.
Jennifer Chu | MIT News Office
Publication Date:
Press Inquiries 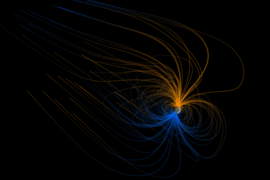 Microscopic minerals excavated from an ancient outcrop of Jack Hills, in Western Australia, have been the subject of intense geological study, as they seem to bear traces of the Earth’s magnetic field reaching as far back as 4.2 billion years ago. That’s almost 1 billion years earlier than when the magnetic field was previously thought to originate, and nearly back to the time when the planet itself was formed.

But as intriguing as this origin story may be, an MIT-led team has now found evidence to the contrary. In a paper published today in Science Advances, the team examined the same type of crystals, called zircons, excavated from the same outcrop, and have concluded that zircons they collected are unreliable as recorders of ancient magnetic fields.

In other words, the jury is still out on whether the Earth’s magnetic field existed earlier than 3.5 billion years ago.

“There is no robust evidence of a magnetic field prior to 3.5 billion years ago, and even if there was a field, it will be very difficult to find evidence for it in Jack Hills zircons,” says Caue Borlina, a graduate student in MIT’s Department of Earth, Atmospheric, and Planetary Sciences (EAPS). “It’s an important result in the sense that we know what not to look for anymore.”

A field, stirred up

Earth’s magnetic field is thought to play an important role in making the planet habitable. Not only does a magnetic field set the direction of our compass needles, it also acts as a shield of sorts, deflecting away solar wind that might otherwise eat away at the atmosphere.

“In the Earth’s first billion years, between 4.4 billion and 3.5 billion years, that’s when life was emerging,” Borlina says. “Whether you have a magnetic field at that time has different implications for the environment in which life emerged on Earth. That’s the motivation for our work.”

Scientists have traditionally used minerals in ancient rocks to determine the orientation and intensity of Earth’s magnetic field back through time. As rocks form and cool, the electrons within individual grains can shift in the direction of the surrounding magnetic field. Once the rock cools past a certain temperature, known as the Curie temperature, the orientations of the electrons are set in stone, so to speak. Scientists can determine their age and use standard magnetometers to measure their orientation, to estimate the strength and orientation of the Earth’s magnetic field at a given point in time.

Since 2001, Weiss and his group have been studying the magnetization of the Jack Hills rocks and zircon grains, with the challenging goal of establishing whether they contain ancient records of the Earth’s magnetic field.

“The Jack Hills zircons are some of the most weakly magnetic objects studied in the history of paleomagnetism,” Weiss says. “Furthermore, these zircons include the oldest known Earth materials, meaning that there are many geological events that could have reset their magnetic records.”

In 2015, a separate research group that had also started studying the Jack Hills zircons argued that they found evidence of magnetic material in zircons that they dated to be 4.2 billion years old — the first evidence that Earth’s magnetic field may have existed prior to 3.5 billion years ago.

But Borlina notes that the team did not confirm whether the magnetic material they detected actually formed during or after the zircon crystal formed 4.2 billion years ago — a goal that he and his team took on for their new paper.

Borlina, Weiss, and their colleagues had collected rocks from the same Jack Hills outcrop, and from those samples, extracted 3,754 zircon grains, each around 150 micrometers long — about the width of a human hair. Using standard dating techniques, they determined the age of each zircon grain, which ranged from 1 billion to 4.2 billion years old.

Around 250 crystals were older than 3.5 billion years. The team isolated and imaged those samples, looking for signs of cracks or secondary materials, such as minerals that may have been deposited on or within the crystal after it had fully formed, and searched for evidence that they were significantly heated over the last few billion years since they formed. Of these 250, they identified just three zircons that were relatively free of such impurities and therefore could contain suitable magnetic records.

The team then carried out detailed experiments on these three zircons to determine what kinds of magnetic materials they might contain. They eventually determined that a magnetic mineral called magnetite was present in two of the three zircons. Using a high-resolution quantum diamond magnetometer, the team looked at cross-sections of each of the two zircons to map the location of the magnetite in each crystal.

They discovered magnetite lying along cracks or damaged zones within the zircons. Such cracks, Borlina says, are pathways that allow water and other elements inside the rock. Such cracks could have let in secondary magnetite that settled into the crystal much later than when the zircon originally formed. Either way, Borlina says the evidence is clear: These zircons cannot be used as a reliable recorder for Earth’s magnetic field.

“For me, these results cast a great deal of doubt on the potential of Jack Hills zircons to faithfully record the palaeomagnetic field intensity prior to 3.5 billion years,” says Andy Biggin, professor of paleomagnetism at the University of Liverpool, who was not involved in the research. “That said, this debate has been raging, like the palaeomagnetic equivalent to Brexit, since 2015 and I would be very surprised if this were the last word on the matter. It is nigh on impossible to prove a negative and neither methods nor interpretations are ever beyond question.”

Despite these new results, Weiss stresses that previous magnetic analyses of these zircons are still highly valuable.

“The team that reported the original zircon magnetic study deserves a lot of credit for trying to tackle this enormously challenging problem,” Weiss says.  “As a result of all the work from both groups, we now understand much better how to study the magnetism of ancient geological materials. We now can begin to apply this knowledge to other mineral grains and to grains from other planetary bodies.”

This research was supported in part by the National Science Foundation.