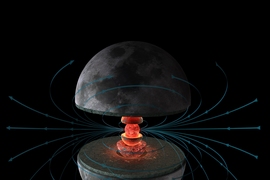 ↓ Download Image
Caption: New measurements of lunar rocks have demonstrated that the ancient moon generated a dynamo magnetic field in its liquid metallic core (innermost red shell). The results raise the possibility of two different mechanisms — one that may have driven an earlier, much stronger dynamo, and a second that kept the moon’s core simmering at a much slower boil toward the end of its lifetime. 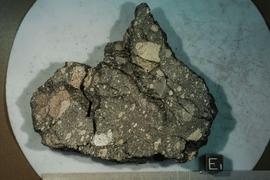 ↓ Download Image
Caption: The Apollo 15 moon rock sample, which was analyzed by MIT and Rutgers University researchers, consists of basalt fragments welded together by a dark glassy matrix that was produced by melting from a meteorite impact. The black scale cube is 1 centimeter across.

Caption:
New measurements of lunar rocks have demonstrated that the ancient moon generated a dynamo magnetic field in its liquid metallic core (innermost red shell). The results raise the possibility of two different mechanisms — one that may have driven an earlier, much stronger dynamo, and a second that kept the moon’s core simmering at a much slower boil toward the end of its lifetime.
Credits:
Image: Hernán Cañellas (provided by Benjamin Weiss)

Caption:
The Apollo 15 moon rock sample, which was analyzed by MIT and Rutgers University researchers, consists of basalt fragments welded together by a dark glassy matrix that was produced by melting from a meteorite impact. The black scale cube is 1 centimeter across.

New evidence from ancient lunar rocks suggests that an active dynamo once churned within the molten metallic core of the moon, generating a magnetic field that lasted at least 1 billion years longer than previously thought. Dynamos are natural generators of magnetic fields around terrestrial bodies, and are powered by the churning of conducting fluids within many stars and planets.

In a paper published today in Science Advances, researchers from MIT and Rutgers University report that a lunar rock collected by NASA’s Apollo 15 mission exhibits signs that it formed 1 to 2.5 billion years ago in the presence of a relatively weak magnetic field of about 5 microtesla. That’s around 10 times weaker than Earth’s current magnetic field but still 1,000 times larger than fields in interplanetary space today.

Several years ago, the same researchers identified 4-billion-year-old lunar rocks that formed under a much stronger field of about 100 microtesla, and they determined that the strength of this field dropped off precipitously around 3 billion years ago. At the time, the researchers were unsure whether the moon’s dynamo — the related magnetic field — died out shortly thereafter or lingered in a weakened state before dissipating completely.

The results reported today support the latter scenario: After the moon’s magnetic field dwindled, it nonetheless persisted for at least another billion years, existing for a total of at least 2 billion years.

Study co-author Benjamin Weiss, professor of planetary sciences in MIT’s Department of Earth, Atmospheric and Planetary Sciences (EAPS), says this new extended lifetime helps to pinpoint the phenomena that powered the moon’s dynamo. Specifically, the results raise the possibility of two different mechanisms — one that may have driven an earlier, much stronger dynamo, and a second that kept the moon’s core simmering at a much slower boil toward the end of its lifetime.

“The concept of a planetary magnetic field produced by moving liquid metal is an idea that is really only a few decades old,” Weiss says. “What powers this motion on Earth and other bodies, particularly on the moon, is not well-understood. We can figure this out by knowing the lifetime of the lunar dynamo.”

Weiss’ co-authors are lead author Sonia Tikoo, a former MIT graduate student who is now an assistant professor at Rutgers; David Shuster of the University of California at Berkeley; Clément Suavet and Huapei Wang of EAPS; and Timothy Grove, the R.R. Schrock Professor of Geology and associate head of EAPS.

Since NASA’s Apollo astronauts brought back samples from the lunar surface, scientists have found some of these rocks to be accurate “recorders” of the moon’s ancient magnetic field. Such rocks contain thousands of tiny grains that, like compass needles, aligned in the direction of ancient fields when the rocks crystallized eons ago. Such grains can give scientists a measure of the moon’s ancient field strength.

“The problem is, there are very few lunar rocks that are younger than about 3 billion years old, because right around then, the moon cooled off, volcanism largely ceased and, along with it, formation of new igneous rocks on the lunar surface,” Weiss explains. “So there were no young samples we could measure to see if there was a field after 3 billion years.”

There is, however, a small class of rocks brought back from the Apollo missions that formed not from ancient lunar eruptions but from asteroid impacts later in the moon’s history. These rocks melted from the heat of such impacts and recrystallized in orientations determined by the moon’s magnetic field.

Weiss and his colleagues analyzed one such rock, known as Apollo 15 sample 15498, which was originally collected on Aug. 1, 1971, from the southern rim of the moon’s Dune Crater. The sample is a mix of minerals and rock fragments, welded together by a glassy matrix, the grains of which preserve records of the moon’s magnetic field at the time the rock was assembled.

“We found that this glassy material that welds things together has excellent magnetic recording properties,” Weiss says.

The team determined that the rock sample was about 1 to 2.5 billion years old — much younger than the samples they previously analyzed. They developed a technique to decipher the ancient magnetic field recorded in the rock’s glassy matrix by first measuring the rock’s natural magnetic properties using a very sensitive magnetometer.

They then exposed the rock to a known magnetic field in the lab, and heated the rock to close to the extreme temperatures in which it originally formed. They measured how the rock’s magnetization changed as they increased the surrounding temperature.

“You see how magnetized it gets from getting heated in that known magnetic field, then you compare that field to the natural magnetic field you measured beforehand, and from that you can figure out what the ancient field strength was,” Weiss explains.

The researchers did have to make one significant adjustment to the experiment to better simulate the original lunar environment, and in particular, its atmosphere. While the Earth’s atmosphere contains around 20 percent oxygen, the moon has only imperceptible traces of the gas. In collaboration with Grove, Suavet built a customized, oxygen-deprived oven in which to heat the rocks, preventing them from rusting while at the same time simulating the oxygen-free environment in which the rocks were originally magnetized.

“In this way, we finally have gotten an accurate measurement of the lunar field,” Weiss says.

From their experiments, the researchers determined that, around 1 to 2.5 billion years ago, the moon harbored a relatively weak magnetic field, with a strength of about 5 microtesla — two orders of magnitude weaker than the moon’s field around 3 to 4 billion years ago. Such a dramatic dip suggests to Weiss and his colleagues that the moon’s dynamo may have been driven by two distinct mechanisms.

Scientists have proposed that the moon’s dynamo may have been powered by the  Earth’s gravitational pull. Early in its history, the moon orbited much closer to the Earth, and the Earth’s gravity, in such close proximity, may have been strong enough to pull on and rotate the rocky exterior of the moon. The moon’s liquid center may have been dragged along with the moon’s outer shell, generating a very strong magnetic field in the process.

It’s thought that the moon may have moved sufficiently far away from the Earth by about 3 billion years ago, such that the power available for the dynamo by this mechanism became insufficient. This happens to be right around the time the moon’s magnetic field strength dropped. A different mechanism may have then kicked in to sustain this weakened field. As the moon moved away from the Earth, its core likely sustained a low boil via a slow process of cooling over at least 1 billion years.

“As the moon cools, its core acts like a lava lamp — low-density stuff rises because it’s hot or because its composition is different from that of the surrounding fluid,” Weiss says. “That’s how we think the Earth’s dynamo works, and that’s what we suggest the late lunar dynamo was doing as well.”

The researchers are planning to analyze even younger lunar rocks to determine when the dynamo died off completely.

“Today the moon’s field is essentially zero,” Weiss says. “And we now know it turned off somewhere between the formation of this rock and today.”

MIT researchers have found that the moon’s magnetic field lasted at least 1 billion years longer than initially thought, reports Charles Q. Choi for NBC News. “Understanding more about the nature of the magnetic field of Earth's moon could shed light on the magnetic fields of distant moons and planets, which could influence their habitability."

A study co-authored by MIT researchers shows that the moon’s magnetic field could have lasted for as long as two billion years, according to Xinhua. “The researchers are planning to analyze more lunar rocks to determine when the dynamo died off completely.”

By examining a lunar rock from the Apollo 15 mission, researchers from MIT and Rutgers University have found that the moon had a magnetic field for at least one billion years longer than initially thought, reports Nicola Davis for The Guardian. The researchers found that the, “lunar dynamo was still going until somewhere between one billion and 2.5bn years ago.”