Today, the moon lacks a global magnetic field, but this wasn’t always the case. Spacecraft measurements of the moon’s crust and lunar rocks retrieved by the Apollo missions contain remnant magnetization that formed 4 to 3.5 billion years ago in a magnetic field comparable in strength to that of the Earth. Scientists have argued that the source of this was a dynamo — a magnetic field generated by the moon’s churning, molten, metal core. However, research indicates that the moon’s suspected small core may not have been able to generate enough energy to sustain the ancient magnetic field that planetary scientists have inferred from in its rocks.

In a recent Science Advances paper, research scientist Rona Oran and professor of planetary sciences Ben Weiss of the MIT Department of Earth, Atmospheric and Planetary Sciences examined the plausibility of an alternative hypothesis that has been around since the 1980s that could produce the remnant magnetization in the lunar crust: transient plasmas generated by meteoroid impacts. Here, they describe some of their findings.

Q: What is the “impact plasmas” hypothesis, and why is it still being considered as a potential mechanism to explain the moon’s ancient magnetism?

Oran: There are two main hypotheses that have been put forward to explain the moon's ancient magnetic field. One is that the moon once generated a dynamo. The primary challenge for this theory was that the moon is much smaller than the Earth, and it doesn't have enough energy to generate a surface magnetic field with the high intensity inferred from the analyses of the Apollo samples and crust.

Weiss: A longstanding alternative hypothesis is that the source of the field was not the moon’s interior itself but rather meteoroid impacts on the surface. In particular, it was proposed that impact plasmas — highly conductive fluids produced by vaporization of the lunar surface — expanded around and engulfed the moon. As they did so, the plasmas would compress and amplify the interplanetary magnetic field, known as the solar wind. The fields would then be induced into the moon’s crust, and the enhanced field signal would then be seen in the soil on the other side of the moon. This hypothesis is supported, in part, by observations of four young, large craters that have strong and large magnetic signals on the opposite site of the moon.

Q: Looking at the impact plasmas model, how did you examine its plausibility, and why were you able to rule it out as a primary suspect?

Weiss: We tested this idea by conducting the first simulations of impact plasmas that self-consistently consider the physics governing the generation and decay of the magnetic field.

Oran: One of the reasons this hypothesis was not yet tested in this way was that the tools that we used belong to the discipline of space sciences; nobody actually applied them to this problem before. Then, Ben, who researches paleomagnetism, and I joined forces to work on this together and showed that the impact plasmas hypothesis cannot work.

The evolution of magnetized plasmas is a complex process where the flow of plasma and the electromagnetic fields change in response to each other. It’s only by simultaneously simulating the plasmas and the magnetic field that you can get a realistic view of the process.

We found that whatever you do, however you play with it in terms of impact location, direction, and the direction of the initial field, you cannot create enough magnetic energy from these impact plasmas. That’s because we can think of the lunar body like this gigantic spherical resistor that basically kills off all the currents that these magnetic fields are trying to induce into it. Then, instead of having strong magnetic fields in the crust caused by the impact, we generate those fields, but they dissipate within minutes, so you end up heating the rock. So, we saw this completely opposite effect of what we originally set out to find.

Q: What does your finding tell us about the evolution of the moon, its magnetism and similar planetary bodies? And what questions remain?

Weiss: If the impact fields hypothesis were correct, it would mean that the remanent magnetization we find on the surface of the moon would essentially tell us nothing about the geophysical and thermal evolution of its interior. This would in turn have had profound implications for tracing out the magnetic history of the moon, and even for understanding the record of remanent magnetization found on other airless bodies like Mercury, which has cratering, and asteroids, which meteorites suggest could have crustal magnetization. Now that we have shown that the impact fields hypothesis is not likely to explain most of the lunar magnetism, this supports the core dynamo hypothesis for magnetism on the moon and other bodies.

Oran: Given that we now favor a lunar dynamo, the strong fields we see on the moon still demand an explanation, because a dynamo like the one we have on Earth, in which the core churns due to its own cooling, may not be sufficient. In recent years, some alternative dynamo theories were developed that might generate stronger fields, for example, stirring of the core by the wobbling of the overlying solid mantle.

Our most immediate followup study is to repeat the same type of simulations but, instead of a non-magnetically active body, we would allow the moon to generate its own core dynamo and then examine how impact plasmas would interact with such a field. Another issue to look at is if you can create an imprint at the impact site itself. One of those scenarios might give us a better match for the magnetizations that we see on the moon’s surface. 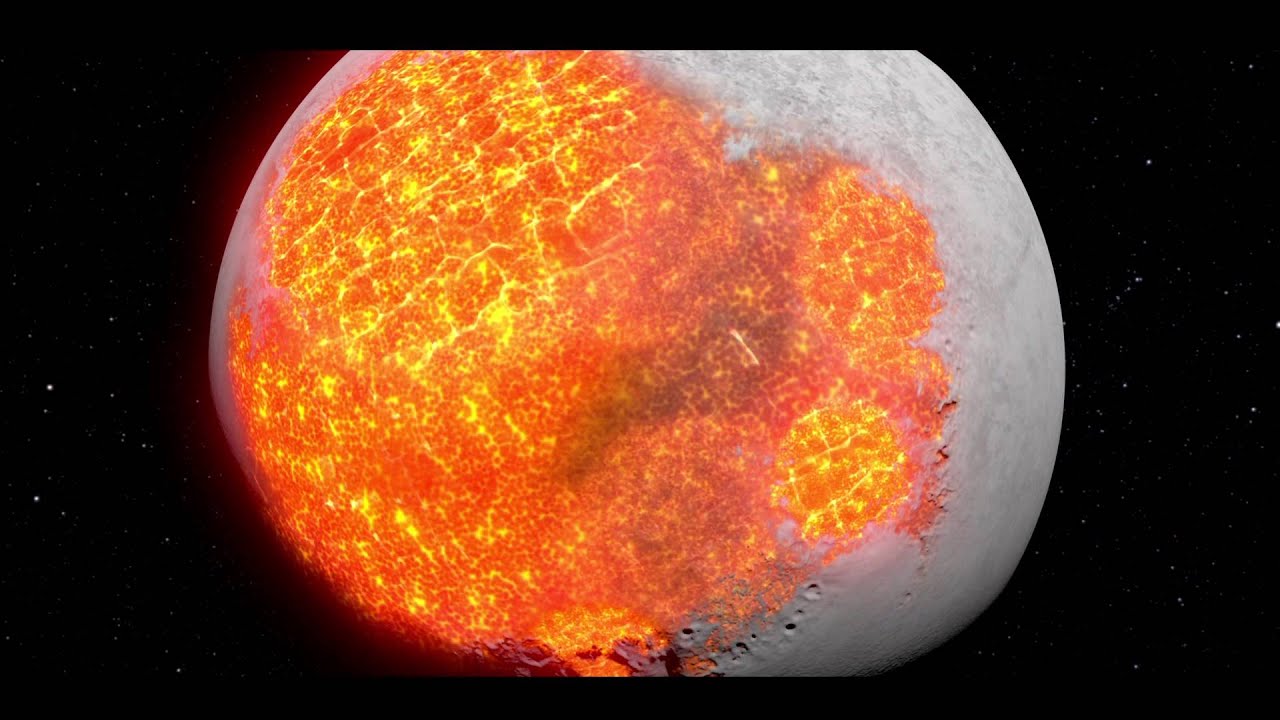 Play video
Evolution of the moon/NASA

Paper: "Was the moon magnetized by impact plasmas?"