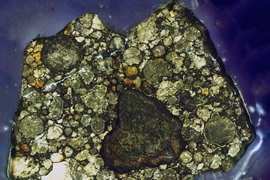 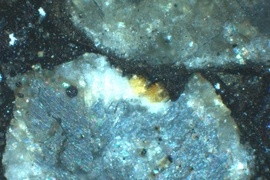 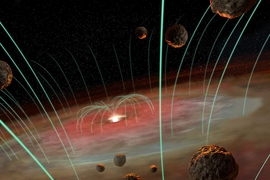 ↓ Download Image
Caption: Artist depiction of a protoplanetary disk consisting of a central star surrounded by a gas cloud permeated by magnetic fields. Objects in the foregrounds are millimeter-sized rock pellets known as chondrules, which are the subjects of this study.
Credits: Image: Hernán Cañellas (copyright: MIT Paleomagnetism Laboratory)

Caption:
Microscope image of a single chondrule from the Semarkona meteorite used in this study. Textured, light-blue regions represent concentrations of dusty olivine, which carry a recording of ancient magnetic fields from the protoplanetary disk.
Credits:
Copyright: MIT Paleomagnetism Laboratory

Caption:
Artist depiction of a protoplanetary disk consisting of a central star surrounded by a gas cloud permeated by magnetic fields. Objects in the foregrounds are millimeter-sized rock pellets known as chondrules, which are the subjects of this study.
Credits:
Image: Hernán Cañellas (copyright: MIT Paleomagnetism Laboratory)

Infant planetary systems are usually nothing more than swirling disks of gas and dust. Over the course of a few million years, this gas gets sucked into the center of the disk to build a star, while the remaining dust accumulates into larger and larger chunks — the building blocks for terrestrial planets.

Astronomers have observed this protoplanetary disk evolution throughout our galaxy — a process that our own solar system underwent early in its history. However, the mechanism by which planetary disks evolve at such a rapid rate has eluded scientists for decades.

Now researchers at MIT, Cambridge University, and elsewhere have provided the first experimental evidence that our solar system’s protoplanetary disk was shaped by an intense magnetic field that drove a massive amount of gas into the sun within just a few million years. The same magnetic field may have propelled dust grains along collision courses, eventually smashing them together to form the initial seeds of terrestrial planets.

The team analyzed a meteorite known as Semarkona — a space rock that crashed in northern India in 1940, and which is considered one of the most pristine known relics of the early solar system. In their experiments, the researchers painstakingly extracted individual pellets, or chondrules, from a small sample of the meteorite, and measured the magnetic orientations of each grain to determine that, indeed, the meteorite was unaltered since its formation in the early galactic disk.

The researchers then measured the magnetic strength of each grain, and calculated the original magnetic field in which those grains were created. Based on their calculations, the group determined that the early solar system harbored a magnetic field as strong as 5 to 54 microteslas — up to 100,000 times stronger than what exists in interstellar space today. Such a magnetic field would be strong enough to drive gas toward the sun at an extremely fast rate.

“Explaining the rapid timescale in which these disks evolve — in only a few million years — has always been a big mystery,” says Roger Fu, a graduate student in MIT’s Department of Earth, Atmospheric and Planetary Sciences. “It turns out that this magnetic field is strong enough to affect the motion of gas at a large scale, in a very significant way.”

Fu and his colleagues, including Ben Weiss, a professor of planetary sciences at MIT, publish their results today in the journal Science.

More than 99 percent of mass in a primordial galactic disk is composed of ionized gas, leaving less than 1 percent as solid particles — the dusty seeds of terrestrial planets. Observations of far-off galaxies have revealed that such massive amounts of gas are accreted, or absorbed, into the central star within just a few million years. However, theoretical models have been unable to identify a mechanism to explain such a rapid accretion rate.

“The idea that the disk gets depleted within just 3 million years is fundamental to understanding how planets form,” Fu says. “But theoretically, that’s difficult to do, and people have had to invoke all these intricate mechanisms to make that happen.”

There are theoretical models that incorporate magnetic fields as a mechanism for disk evolution, but until now, there has been no observational data to support the theories.

Fu points out that researchers have been searching since the 1960s — “with little success” — for evidence of early magnetic fields in meteorite samples. That’s because, for the most part, the meteorites studied had been altered in some form or other.

“Most of these meteorites … were heated, or had water coursing through them, so the chances of any one meteorite retaining a recording of the most primordial magnetic field in the nebula was almost zero,” Fu says.

He and his colleagues chose to analyze the Semarkona meteorite because of its reputation as a pristine sample from the early solar system.

From millimeter- to kilometer-sized planets

To determine whether the meteorite was indeed unchanged since its formation, the group identified and extracted a handful of millimeter-sized grains, or chondrules, from a small sample of the meteorite, and then measured their individual magnetic orientations.

The researchers found that each grain they analyzed bore a unique magnetic orientation — proof that the meteorite was indeed pristine.

“There’s no other alternative but to say this recording is coming from an original nebular field,” Fu says.

The group then calculated the strength of the original magnetic field, based on the magnetic strength of each chondrule. Their result could support one of two theories of early planetary disk formation: magnetorotational instability, the theory that a turbulent configuration of magnetic fields drove gas toward the sun, or magnetocentrifugal wind, the idea that gas accreted onto the sun via a more orderly, hourglass-shaped pattern of magnetic fields.

“A persistent challenge for understanding how planets form is how to go from micron-sized dust to kilometer-sized planets in only a few million years,” Fu says. “How chondrules formed was probably instrumental to how planets formed.”

Now, based on the group’s results, Fu says it’s likely that chondrules formed either as molten droplets resulting from the collisions of 10- to 1,000-kilometer rocky bodies, or through the spontaneous compression of surrounding gas, which melted dust particles together.

It’s unlikely that chondrules formed via electric currents, or X-wind — flash-heating events that occur close to the sun. According to theoretical models, such events can only take place within magnetic fields stronger than 100 microteslas — far greater than what Fu and his colleagues measured.

“Until now, we were missing data,” Fu says. “Now there is a data point. And to understand fully the implications of what 50 microteslas can do in a gas, there’s a lot more theoretical work to be done.”

Jerome Gattacceca, research director at the European Centre for Research and Education in Environmental Sciences, says the solar system would have looked very different today if it had not been exposed to magnetic fields.

“Without this kind of mechanism, all the matter in the solar system would have ended up in the sun, and we would not be here to discuss it,” says Gattacceca, who was not involved in the research. “There has to be a mechanism to prevent that. Several models exist, and this paper provides a viable mechanism, based on the existence of a significant magnetic field, to form the solar system as we know it.”

This work was funded in part by NASA and the National Science Foundation.