Caption:
Microwave (orange), optical (red, green, blue) and ultraviolet (blue) image of the Phoenix Cluster.
Credits:
Image: UV — NASA/JPL-Caltech/M.McDonald; Optical — AURA/NOAO/CTIO/MIT/M.McDonald; Microwave — NSF/SPT
As vast as the Milky Way may seem, our sprawling galaxy is but a speck next to the largest structures in the universe: galaxy clusters — collections of hundreds to thousands of galaxies bound together by gravity. At the heart of most galaxy clusters sit massive old galaxies, within which only a few new stars are born each year.

Now a multi-institution team led by MIT researchers has identified a galaxy cluster seven billion light-years away that dwarfs most known clusters, churning out a dazzling 740 new stars per year in the central galaxy. The galaxy cluster is among the most massive and most luminous in the universe. While scientists have formally catalogued the cluster by the name SPT-CLJ2344-4243, the MIT-led group has a more informal moniker: the Phoenix cluster, named after the constellation in which it resides. 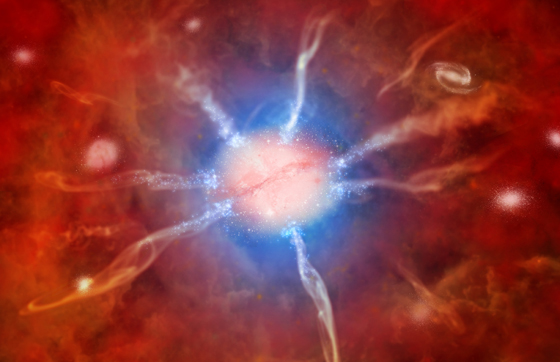 An artist's impression of a galaxy at the center of the Phoenix Cluster.
Image: NASA/CXC/M. Weiss

Michael McDonald, a Hubble Fellow in MIT’s Kavli Institute for Astrophysics and Space Research, says that aside from its mass and brightness, the Phoenix cluster bears another exceptional quality: While the cores of most galaxy clusters appear red, indicating that their stars are all very old, the galaxy in the core of the Phoenix cluster is bright blue — an indication that the surrounding gas is cooling at a rapid rate, generating ideal conditions for a massive starburst.

“Central galaxies have typically been referred to as ‘red and dead’ — just a bunch of old stars orbiting a massive black hole, and there’s nothing new happening,” McDonald says. “But the central galaxy in this cluster has somehow come to life, and is giving birth to prodigious numbers of new stars.”

McDonald and his colleagues publish their findings this week in Nature.

Looking for a cool core

The new galaxy cluster may shed new light on a decades-old astrophysical conundrum termed the “cooling flow problem.” Gas at the core of a cluster, spewed from nearby galaxies and supernova explosions, should naturally cool over time, forming a flow cold enough to condense and form new stars. However, scientists have been unable to identify any galaxy cluster that does, in fact, cool at the rates predicted.

One explanation, McDonald says, may be that a cluster’s natural cooling is somehow interrupted. He cites the Perseus cluster as an example: The black hole at the center of this cluster emits jets of particles that may act to reheat the core, preventing it from cooling completely.

“What’s interesting about the Phoenix cluster is that we see almost all the cooling that was predicted,” McDonald says.  “It could be that this is earlier in the evolution where there’s nothing stopping it, so it cools and becomes a starburst … in fact, there are few things forming stars in the universe faster than this galaxy.”

Getting the complete view

The Phoenix cluster was first detected in 2010 by researchers using the South Pole Telescope, a 10-meter-wide telescope in Antarctica that scans huge patches of the sky for new galaxy clusters. McDonald and his colleagues recently used the space-based Chandra X-Ray Observatory to study the most massive clusters identified by the South Pole Telescope. Immediately, the Phoenix cluster stood out in the X-ray data as the brightest of the clusters — a finding that prompted McDonald to follow up with more observations of the cluster from more telescopes.

The team ultimately acquired images of the Phoenix cluster from 10 different telescopes in space and on the ground around the world. Each telescope observed the cluster at different wavelengths, illuminating different features of it.

From the cluster’s temperature, the group calculated its mass: The hotter a ball of gas, the greater its overall mass. The researchers found the Phoenix cluster is easily among the most massive clusters in the universe.

The group then looked for signs of star formation; new stars are particularly bright in the ultraviolet, and the researchers found that ultraviolet images taken of the cluster revealed hundreds of young stars in its core. The cluster’s extreme luminosity also indicated that it was cooling very rapidly, most likely providing the fuel for star formation.

Brian McNamara, a professor of astrophysics at the University of Waterloo, says the extreme starburst identified by the group may illustrate how the most massive primeval galaxies may have formed. He adds that the Phoenix cluster’s exceptional behavior may result from a faulty mechanism at its core.

“It shows cooling and star formation during a phase when the supermassive black hole lurking in the galaxy's nucleus seems to be asleep at the switch,” McNamara says. “But once the black hole gets going and begins to push the hot atmosphere aside, perhaps in another 100 million years or so, it should shut down cooling and reduce the star formation rate in a feedback process that is active in most galaxy clusters.”

McDonald hopes to access the Hubble Space Telescope to continue studying this massive galaxy cluster. “You’d see these fantastic blue filaments where stars are forming out of cooling streams,” McDonald says. “It should look quite remarkable, instead of our ground-based images which show a blob of blue light.”

As for the cluster’s seemingly anomalous cooling, McDonald guesses that perhaps the phenomenon is not as exceptional as it appears.

“It could be a timing thing, where 1 percent of the time you get this vigorous star formation and runaway cooling,” McDonald says. “It might be that every cluster we see goes through this phase, but it’s so short-lived that this is the only one we’ve found. And we were in the right place at the right time.”