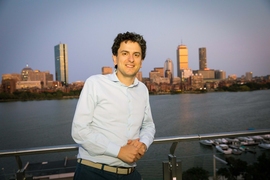 Caption:
Nikos Trichakis applies the tools of operations research to a wide range of problems, from medicine to corporate finance.
Credits:
Image: courtesy of MIT Sloan

Suppose you were designing a system to allocate organ donations for the greater good. From one perspective, an optimized program might give organs to the youngest possible recipient, to maximize the number of life-years gained from each organ donation.

However, such a system would likely be regarded as discriminatory based on its use of age, and would be unlikely to gain society-wide approval.

“That’s not going to be acceptable in practice,” says Nikos Trichakis, an associate professor at the MIT Sloan School of Management.

This kind of problem, broadly speaking, is one of many in which efficiency — in this case, perhaps gaining the most life-years from organ donations — can lie in tension with fairness, defined as a reasonable access to goods among many groups within society.

The tension between efficiency and fairness can seem intractable. But actually, there are ways to design systems that tackle it. That’s what Trichakis does. Over the last decade he has published research analyzing variations of this problem in many areas of life, from liver-transplant policy and scheduling infusions in cancer centers to corporate-finance decisions.

“I think one of the innovations my work is bringing is applying optimization and quantitative thinking and analytics in real-world domains in a way that respects fairness, equity, and things that society expects,” Trichakis says.

For his research and teaching, Trichakis was awarded tenure at MIT last year.

A family of engineers

Trichakis is a native of Greece who grew up in a family of engineers, something that heavily influenced his own career trajectory.

“I was raised in a family where literally everyone was an engineer, my uncles, my parents,” Trichakis says. “So I guess I have the virus of problem-solving.” He received his undergraduate degree in electrical engineering at Aristotle University, in Thessaloniki, but over time found that his interests did not lie strictly within the field.

“I started studying electrical engineering myself, but I always liked math, and the way I think about my research is as something that lies at that intersection,” Trichakis notes. “For me, these are the two things that have always excited me.”

Partly following the example of a friend, Trichakis enrolled in a master’s program at Stanford University, where he realized that operations research was located precisely at that same intersection, and decided to pursue it further. He received another master’s degree from Imperial College, London, then enrolled in MIT Sloan’s PhD program.

At Sloan, Trichakis worked with Dimitris Bertsimas and Vivek Farias, two leading operations research scholars, receiving his PhD in 2011. In the time since then, he has gone on to publish widely cited papers with them, among other colleagues; in all, Trichakis has published over two dozen peer-reviewed articles.

In one 2013 paper published in Operations Research, “Fairness, Efficiency, and Flexibility in Organ Allocation for Kidney Transplanation,” Trichakis, Bertsimas, and Farias introduced a organ transplantation system which, rather than narrowing the criteria for fairness or efficiency in transplants, in effect broadened them, by letting policymakers construct a priority system using a point scale based on many factors, including medical urgency, the waiting time for a transplant, and more.

That system, they found, would deliver an 8 percent increase in life-years gained from a given set of transplants, while meeting all the fairness criteria specified by U.S. federal policymakers.

“When there is scarcity, there is very often a tradeoff between efficiency objectives and also fairness,” Trichakis notes. “But the reason you see these gains is really the power of quantitative thinking, the power of optimization, and the power of analytics.”

And in one widely-cited Management Science paper from 2012, “On the Fairness-Efficiency Tradeoff,” the three scholars outlined a larger framework for assessing these systems across a variety of domans, from air traffic control to call-center operations and health care scheduling. The most efficient air-traffic schedule at a given airport might favor particular airlines, for instance, but in quantifying that, analysts and policymakers can at least measure what the scholars call “the price of fairness,” and develop systems that stakeholders can agree upon.

Trichakis joined the MIT faculty in 2016, having served on the faculty at Harvard University from 2011 to 2016. At the Institute, he has continued to conduct research on a diverse set of problems. For instance, in one 2017 paper in Management Science, written with Dan Iancu and Gerry Tsoukalas, Trichakis and his co-authors found, a bit paradoxically, that leveraged firms need the most discipline about handling their own inventories. Firms operating with significant debt may be inclined to liquidate inventories, but then quickly find themselves losing value, having reduced their scope of operations.

Still, Trichakis continues to focus on health care as a significant area of his research. In a 2020 paper in Transplantation, Trichakis, Bertsimas, and four co-authors found that a “continuous distribution” framework for allocating organ transplants — the one that considers many factors at once — also serves to reduce the geographic challenges in liver transplant allocation systems. They estimate a more broad-multifactor system would save 500 lives per year, creating “the greatest reduction in patient deaths and … the most equitable geographic distribution across comparable organ transportation burden.”

As the Covid-19 pandemic continues, Trichakis is also examining treatment and vaccine distribution issues with the same framework. But whatever the topic, he will keep using operations research tools to find ways that society can distribute its scarce resources with acceptable levels of both efficiency and fairness for all.

“You can solve real problems in a very wide range of application domains, all the way from societal and policymaking problems to operational problems within a particular industry,” says Trichakis.