When consumers look at cars at an auto dealership, they have speed on their minds — and not necessarily the sort measured by 0-to-60 acceleration. Rather, they want to buy cars quickly: Evidence shows that people tend to purchase something that’s available on the lot, rather than waiting for an order to arrive from another site, even though an auto is a major purchase.

This presents an interesting problem for dealers and manufacturers: Considering factors such as popularity and profit margin, what’s the optimal mix of models to showcase on the lot, given that buyers can be steered toward what’s available?

Skill in addressing these questions is valuable. But according to the self-effacing Farias, an associate professor at the MIT Sloan School of Management, his ability to tackle tough business issues is mostly a byproduct of his pursuit of interesting questions. 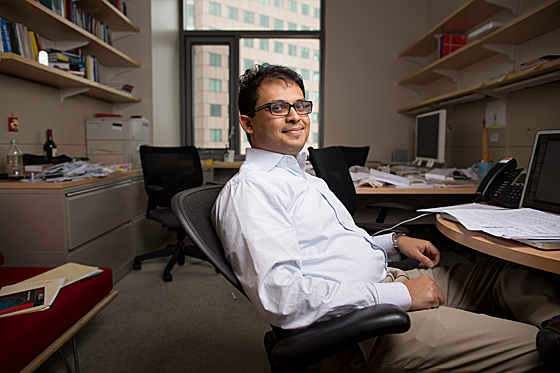 “I don’t think there is a deep plan connecting my research efforts,” Farias says. “There is just a class of applied mathematics problems that I know how to think about, at the interface of optimization, probability and stochastic control.”

These optimization questions apply in many fields. Let’s say an airport has a lot of planes ready to roll out to the taxiway: In what order should they take off? Or suppose you want to match organs for transplantation with potential recipients more effectively: How would you do that?

Potential solutions are tucked into Farias’ burgeoning body of work: He has published 15 research papers in peer-reviewed journals since joining MIT in 2007, along with several other refereed papers presented at conferences, and more in the pipeline.

That commitment to research and teaching helped Farias, at age 31, earn tenure from MIT earlier this year. Beyond his publications, former students whose PhD theses he co-supervised have landed jobs at Harvard University and New York University.

“You work with these amazing students,” Farias says of his experience at MIT. “Life would be different without them. That’s the reason I come in to work every day.”

By Farias’ own account, he had a “fairly random” path to academia. He was born and raised in Mumbai. His father is a contractor who runs a construction firm, and his mother is a teacher. Farias did well in school, although he says he was not obsessed with it.

Casting around for college opportunities in the United States — which he had never visited before — Farias attended the University of Arizona, where a scholarship helped pay his way. Today, he happily recounts his undergraduate experience: Professors took an interest in him, helping spur his studies, and a nearby family hosted him at times, giving him meals, presents and moral support.

“It was a really great experience,” Farias says. “It was an amazing place to be. People were incredibly kind to me. All of these things made a huge difference.”

Following a freshman course in crystallography with a professor named Brian Zelinski, Farias spent the following summer in the labs of two other professors in the same field, Dunbar Birnie and Michael Weinberg. “I started working with them and discovered research, and it was just phenomenal,” Farias says. “My ability to get into graduate school was very much a function of their helping me along. I owe a huge debt of gratitude to these people.”

Farias majored in computer engineering at Arizona, then received his PhD in electrical engineering at Stanford University in 2007, working with Benjamin Van Roy. That year, he received a job offer from MIT, which he was delighted to accept.

“It was a big surprise,” Farias says. “I hardly expected it to happen.” Indeed, he adds, being at MIT was “a little intimidating” at first, except that his colleagues soon started reaching out to him, in some cases by mentoring graduate students with him.

The price of fairness

One of those colleagues, Dimitri Bertsimas of MIT Sloan, agreed to co-advise, with Farias, a graduate student named Nikos Trickhakis. Together, the three of them began working on a way to make the holding of aircraft on the ground, at airports, more equitable for a larger number of passengers. That research question was motivated by prior work of Bertsimas and MIT aeronautics and astronautics professor Amadeo Odoni on optimizing those ground holding patterns.

Suppose, again, that you want to select the best process for a backlog of airplanes to take off. The easiest way, perhaps, would be for planes to depart according to how long they have been waiting. But the issue is not so simple: Suppose the first planes in such a queue are small regional jets with few passengers, while waiting behind those planes are several bigger aircraft with hundreds of passengers who have connections to make at other airports. To make the whole system function better, you might want to boost the priority of the bigger planes. Otherwise, Farias observes, “You’re affecting more people and potentially creating network delays.”

That might not seem perfectly fair to the passengers in the regional jets, but it is a factor, Farias contends, that should enter into the decision-making process.

A similar analytical framework informs Farias’ research on organ transplants — work that asks if there is a way to increase the years of use from donated organs while staying within medicine’s ethical guidelines. His analysis shows that when it comes to kidneys, for instance, it may be possible to increase the years of use for transplanted organs by 7 to 8 percent. Farias is now serving on the Technical Advisory Committee of the Scientific Registry of Transplant Recipients, a national group that studies organ transplant policy.

It’s a long way, in a sense, from the car dealership to the airport to the operating room. But building the mathematical framework for examining the issues found in such diverse places, Farias says, keeps him motivated and energized: “It’s why I’m in academia.”